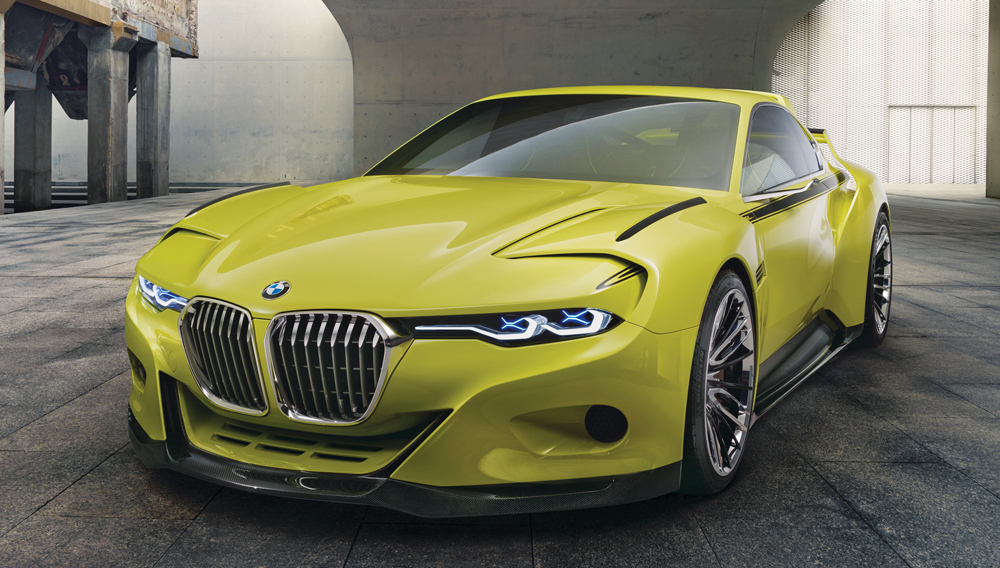 BMW’s Hommage concept pays tribute to a model that ruled its racing class four decades ago.

In 1971, BMW introduced the 3.0 CSL, a production-model-based racecar that would dominate its competition in the ensuing years. The car won its class at Le Mans in 1973 and claimed the European Touring Car Championship that same year and every season from 1975 through 1979. In May, at the Concorso d’Eleganza Villa d’Este in Italy, BMW unveiled the 3.0 CSL Hommage, a concept car that serves as an homage—hence the name—to the original. “We felt this was the right time to look into the ’70s, into a car that’s a pretty strong icon,” says head of BMW design Karim Habib.

The surfaces of the 3.0 CSL Hommage feature deep folds and aerodynamic channels that flow over the back haunches and into the taillights. “That combination of very modern, very simple, very generous surfaces with this overlapping—that is what makes the personality of this car,” says Habib.

Some design elements clearly derive from the 3.0 CSL, such as the protruding nose, the BMW roundel logo on each C-pillar, and the prominent rear wing, which earned the original car its nickname of the “Batmobile.” The three-part roofline evokes that of the 3.0 CS, which preceded the 3.0 CSL and was one of the first sport coupes with a roof that did not flow into the tail.

To keep the car’s weight down, BMW built the original 3.0 CSL with aluminum and thinner-than-usual steel. The Hommage’s body is constructed of carbon fiber. The cockpit is austere compared to those of most contemporary sport coupes: It includes single-piece carbon-fiber seats, a wooden dashboard that evokes the wooden trim of the original 3.0 CSL, and a sport steering wheel similar to those found in the BMWs that compete in the DTM German touring-car racing series.

In addition to achieving success on the racetrack, the 3.0 CSL served as the canvas for the first two BMW Art Cars, a collection of vehicles painted by such prominent artists as Andy Warhol and Roy Lichtenstein under commissions from BMW. In celebration of the Art Car program’s 40th anniversary, a selection of these automobiles was exhibited in May at Villa Erba, just down the road from Villa d’Este and the concours. The display included the first Art Car, a 3.0 CSL that Alexander Calder painted in 1975 in his signature palette of primary colors. Also shown was the 3.0 CSL that Frank Stella painted a year later with a black-and-white design reminiscent of graph paper.

When Robb Report went to press, BMW had not decided if it would display the 3.0 CSL Hommage among the other concept vehicles at the Pebble Beach Concours d’Elegance, which takes place August 16. The company did say that it has no intention of making the Hommage a production model. Like each Art Car, it will remain a one-of-a-kind design.