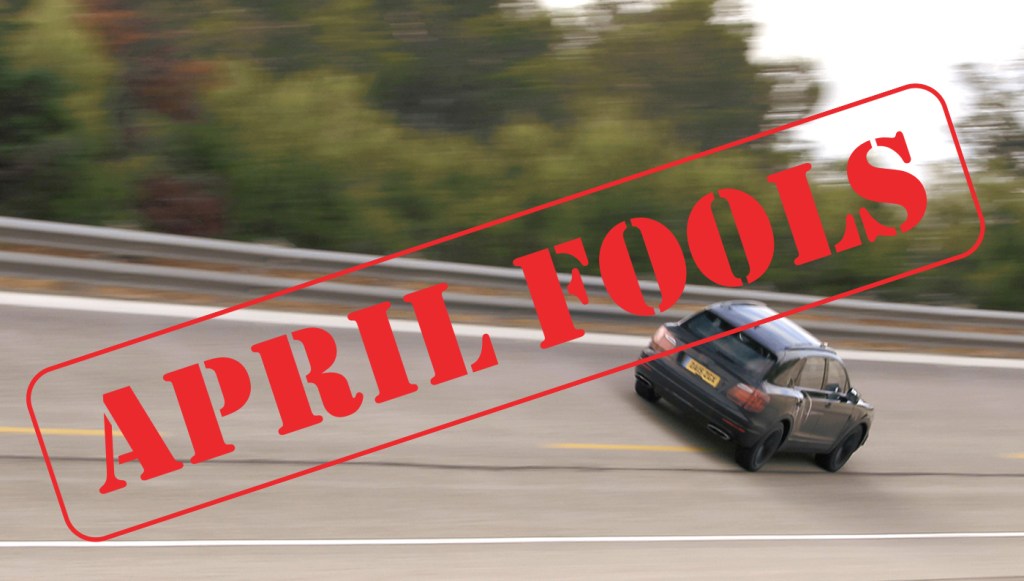 The Bentley Bentayga Bonaparte at the Nürburgring track.

Pope Francis once stated, “It is not possible to go backwards. We must go forward. Always forward.” That papal platitude was proved false yesterday when a Bentley Bentayga set the course record at Germany’s notorious Nürburgring track—while in reverse. Crushing the 12.9-mile Nordschleife section in 6 minutes and 44 seconds, Bentley bested the previous top time, set in 2009, by a phenomenal 4 seconds.

“This represents a quantum leap in automotive innovation,” says driver Sam Beckett. “Traveling at full speed, I focused on the rearview mirror and it became clear that the future lay behind me.” The vehicle that was put through its paces is a prototype for an extremely limited competition edition planned to premiere in the fall of 2019. Among the new features being tested is a ninth driving mode dubbed “Retrograde.” The setting shifts the drivetrain dynamics by using Bentley’s innovative Antipodal Transference Technology (ATT), a system that alters torque vectors and suspension rigidity while giving the rear axle and wheels heightened responsiveness through patented Intuitive Feel Processing (IFP). The result is enhanced handling when moving counterpole to forward. The experimental engineering was developed to better suit the needs of Bentley’s new target market, British Special Forces.

“Our ground-breaking antipodal advancements were developed for high-speed evasive maneuvers and rapid retreat,” explains Oliver P. Smith, the marque’s director of covert research and development. “But it’s also fun when you want to mess with minds on the motorway.” Introduced in 2015 and released last year, the Bentley Bentayga is the world’s fastest and most powerful SUV. The original model boasted a 600 hp W-12 engine (with 663 ft lbs of torque) paired with an 8-speed gearbox, a combination that enabled the highly functional four-door to fly from zero to 60 mph in 4 seconds while on its way to 187 mph.

But Bentley will soon be giving its beast more brawn. Named the Bentley Bentayga Bonaparte, the limited-edition line will carry a 6.5-liter V-12 engine that corrals 800 horses—11 more ponies than the fastest production Ferrari. Unsubstantiated reports have cited a rate of acceleration from zero to 60 mph in 2.9 seconds and a top speed of 229 mph, in either direction.

“This vehicle will be perfect for both military operatives and soccer moms on a mission,” assures Smith. “Maybe not Navy SEALs though, they do a lot in the water.”

Only 10 examples of the Bentley Bentayga Bonaparte will be offered, each at a starting price of $525,000. Those interested in a more tactical transport will be able to order a bullet-proof, weaponized version (with Mulliner trim) for an additional $375—no background check required. (bentleymotors.com)