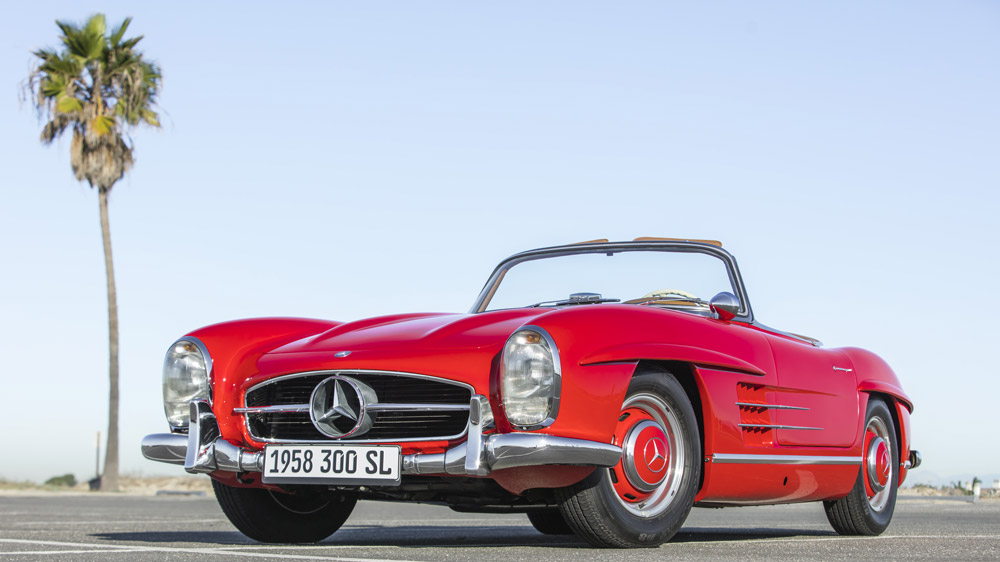 When Bonhams returns to the Fernandia Beach Golf Club in Florida for its annual Amelia Island Auction on March 5, the auction house will offer 20 significant vehicles from the private collection of Gerhard Schnuerer, a Southern California resident whose assemblage of cars chronicles the evolution of the automobile. In particular, Schnuerer has specialized in vehicles from his native Germany, and Bonhams’s upcoming sale features a trio of exceptional Mercedes-Benz motorcars, each one a premiere  representation of its era.

The oldest lot from the collection, an 1897 10hp Benz Mylord-Coupe, is also one of the earliest motorcars equipped with a twin-cylinder engine and king-pin steering. Believed to be one of only three examples still in existence with this rare body style, the car represents the marque’s first legitimate foray into motorized vehicles through the presence of the revered Contra-Motor, which, as the name suggests, produces 10 hp.

“It’s the connection between the horse-drawn buggy and the motorized vehicle as we know it,” says specialist Michael Caimano, highlighting the car’s body style, which mirrors traditional horse-drawn carriages of the time period. “As Benz evolved the engine, it made sense to attach it to something widely accepted as a mode of transportation.” Bonhams expects the car to sell for as much as $750,000.

By the start of the 20th century’s second decade, Benz had significantly upgraded the power of its machines, evidenced by a 1911 Benz 50hp Victoria that will also cross the Bonhams block. Reportedly built for Titanic passenger Charles Melville Hays (who never took delivery due to the aforementioned cruise liner’s tragic sinking), this particular vehicle cost almost $10,000 when new—the equivalent of almost $278,000 today. It’s also believed to be the only surviving example of the model.

According to Caimano, this car—with its open coachwork and large T-Head inline 4-cylinder engine—represents an early iteration of the sports car. Remarkably, the vehicle’s ownership history is well-documented across all 109 years of its existence. “Even if there were other surviving examples of the 50 hp chassis and engine,” says Caimano, “this is a totally customized car. It really stands out from the crowd because there’s nothing else like it.” For all of those reasons, it’s expected to fetch as much as $500,000.

The car features coachwork by Demarest.  Photo: Courtesy of Bonhams.

Arguably the most recognized automobile to be sold from the Schnuerer collection is a 1958 Mercedes-Benz 300 SL Roadster. This example of the coveted model has been conservatively estimated to sell for $1.1 million.

The 1958 Mercedes-Benz 300 SL Roadster being presented by Bonhams.  Photo: Courtesy of Bonhams.

Sporting a restoration carried out by the Mercedes-Benz Classic Center USA, the car boasts its original matching-numbers engine and the marque’s iconic Fire Brigade Red paint scheme with a tan interior. Of equal significance, this particular SL Roadster was driven by Sir Stirling Moss during the Pebble Beach Tour d’Elegance in 2015.

“You have the most famous name attached to a 300 SL actually driving this car,” Caimano says. “When you talk about other examples that have been driven by Stirling Moss, you’d be talking about his competition cars that cost $20 million. He actually signed inside the glove box, as well, which adds more provenance to that portion of the car’s life.”

This SL Roadster was driven by Sir Stirling Moss in the 2015 Pebble Beach Tour d’Elegance.  Photo: Courtesy of Bonhams.

Bonhams will begin its Amelia Island Auction on Thursday, March 5, at 11 a.m. EST. Priced at $150, bidder registration includes catalog and entry for one guest.