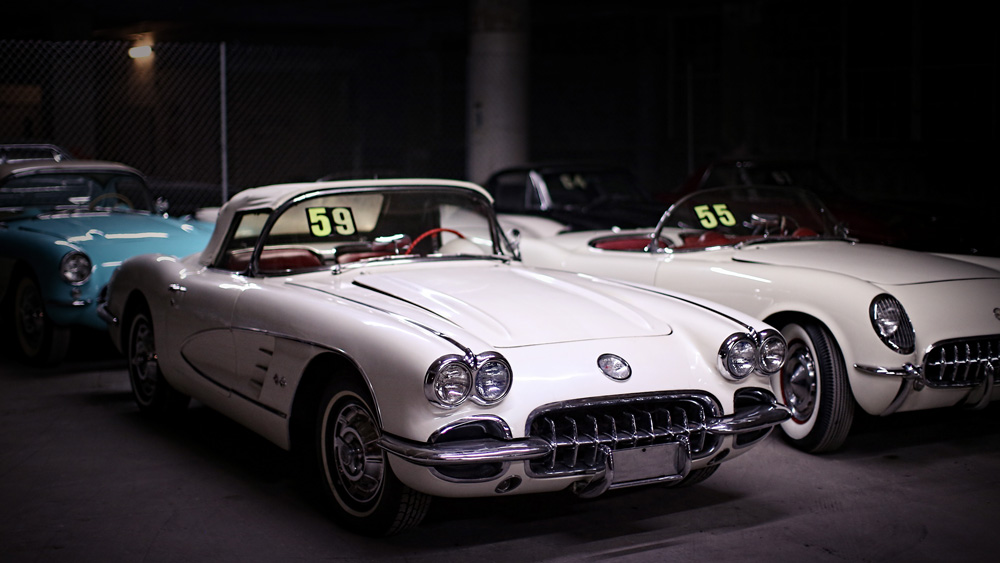 In 1989, Long Island carpenter Dennis Amodeo won a VH1 sweepstakes that was giving away 36 Corvettes—one from each year of ‘Vette production excluding 1983’s limited run of test mules destined for the crusher. Psychedelic pop artist Peter Max would eventually purchase the 36 Corvettes from Amodeo for an art project, but that venture, much like the ’83 Corvette, never saw the light of day.

What subsequently became the infamously neglected Peter Max collection ran a high risk of never seeing the light of day, either. Max’s Corvettes ended up scattered about New York City parking garages, with the cars gathering 25 years-worth of environmental fallout and cat-paw marks.

Many of the cars were found with 25 years-worth of dust and disrepair.  Photo: Courtesy of Corvette Heroes.

But in 2014, the fortunes turned not just for some, but for all of the 36 Corvettes as soon as Corvette Heroes stepped in and bought the entire collection. Corvette Heroes is an organization made up of New York real estate professionals aligned with Gotham Comedy Club co-owner and Corvette concours judge Chris Mazzilli.

Mazzilli, who also owns a restoration shop on Long Island, is overseeing these Corvettes’ second chance at life. The ravages of time have been especially unkind to the oldest Corvette in the collection. “The ’53 was a basket case,” Mazzilli told Robb Report recently at the LA Auto Show. “We have 4,000 hours in this car.”

Chevrolet built only 300 Corvettes for the 1953 model year. The vehicle we were standing in front of is No. 291. It’s estimated that fewer than 140 examples of the first-year Corvette still exist today. “Less than five or 10 are restored to this level,” Mazzilli states. “I mean, every nut and bolt on this car is correct.”

The 1953 Corvette in the collection.  Photo: Courtesy of Corvette Heroes.

Much like how this incredible sidebar in Corvette history began with a giveaway, it will also conclude with a giveaway. Once restoration is completed on all 36 cars, they will be given away (individually this time) at corvetteheroes.com, with all proceeds benefiting The National Guard Educational Foundation.

Chris Mazzilli, who owns a restoration shop on Long Island, is overseeing the collection’s restoration.  Photo: Courtesy of Corvette Heroes.

The fully restored Corvette collection boasts a huge bandwidth of individual vehicle values, ranging from around $15,000 for the ’80s models all the way north of $500,000 for the treasured 1953 roadster.