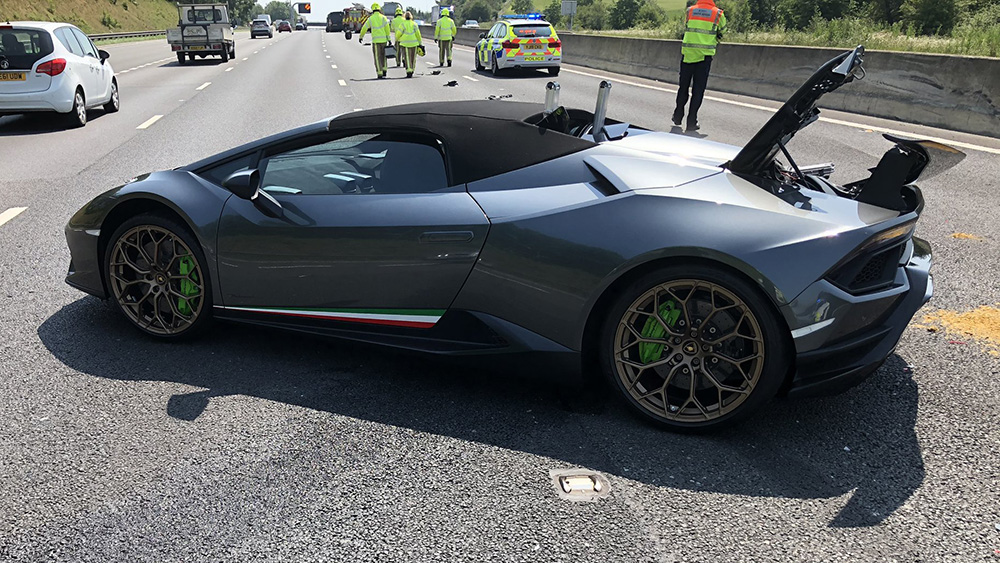 It’s hard to imagine a better moment than being handed the keys to your own brand new Lamborghini. Unless, of course, you were to crash the supercar car shortly after driving off the lot. That would be a nightmare, and it’s one a British man lived through earlier this week when he reportedly wrecked his Huracán Performante Spyder less than a half hour after leaving the dealership.

It wasn’t nerves or hubris that did in this driver; instead the crash appears to have just been a case of plain old bad luck. The accident occurred on Wednesday afternoon, shortly after the unnamed driver had taken possession of the dazzling supercar. In a tweet, West Yorkshire Police said that the Lambo driver was traveling on the M1 just east of Leicester when the mid-engine speedster experienced “mechanical failure.” While the driver was almost certainly cursing their luck at this point, things soon got significantly worse as an “innocent motorist” in a van plowed into the Huracán moments later.

As you might expect, the collision left the Blu Aegeus-finished Huracán in a sorry state. Its engine bay was left badly smashed up, and its rear-right wheel was sheared right off. Fortunately, the car’s anti-roll bars deployed to help keep the owner safe. The driver of the van wasn’t as lucky. They suffered a head injury, though it was not believed to be serious, according to the BBC.

While the damage certainly could have been much worse, Motor1.com reports that the $308,859 vehicle will almost certainly be declared totaled this point. Police were quick to note that it’s only a car, but its “could have cried” hashtag also says exactly what we’re all thinking.

As unlucky as this Huracán owner may have been, he’s not the first supercar buyer to fall victim to this cruel fate. Last summer, comedian Tracy Morgan had just left a dealership in a pre-owned 2012 Bugatti Veyron 16.4 Grand Sport when he was side-swiped by another “innocent motorist,” this one in a Honda CR-V. While the $2 million car was not totaled, Morgan reportedly had to pay $200,000 to repair it.