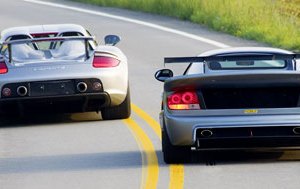 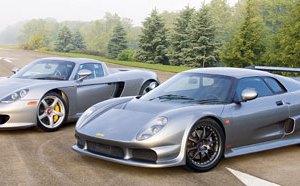 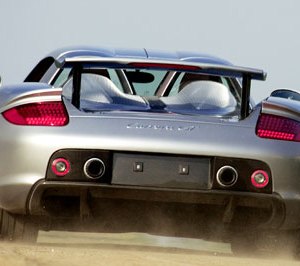 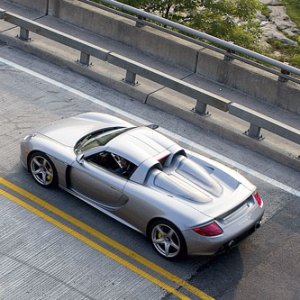 The wailing exhaust note of a Porsche V-10 engine is not a wake-up call option at most resorts. Nevertheless, that distinctive reveille echoes early one morning off the high walls of the Chateau LaFayette, a grand, Ritz Paris–style hotel at the Nemacolin Woodlands Resort and Spa in Farmington, Pa. The bugler, in this case, is Ward Burton, the onetime Daytona 500 winner who is lending his expert hands and feet to evaluate the virtues and vices of the Noble M400 and the Porsche Carrera GT, two sports cars that were derived from racecars.

Assessing two automobiles that each can top 180 mph requires some intimate familiarity with lofty speeds. It also requires a great deal of space, and with the help of a few strategically placed cones, the 3,900-foot-long asphalt airstrip just behind the LaFayette becomes a first-rate imitation of a racetrack. With more than half a mile of empty tarmac and one very capable driver at our disposal, we are able to explore the considerable performance peaks of both vehicles without piquing the interest of local law enforcement authorities.

Place a NASCAR driver behind the wheel of a 605 hp German supercar, and a funny thing happens. The second he becomes accustomed to engaging the temperamental clutch, the scenery viewed through the passenger-side window blurs, except for the birds in flight, whose velocities the vehicle quickly approaches. Then, in less than eight seconds, after 100 mph has come and gone, it is bye-bye, birdies. As the car rips through a quarter mile and crests the crown of a hill, the thought occurs that if the automatically activated rear wing were any larger, and if it curved down instead of up, this is the point at which we would achieve liftoff.

Deceleration requires even less time and space. With well under 1,000 feet of runway remaining, the yellow Porsche calipers clamp hard on their ceramic rotors, and our ride ends as abruptly as it had begun. With a click, the two-plate ceramic clutch misses again, and in the morning’s sudden silence, we actually can hear crickets chirping. Bless that clutch.

Although Burton participates in a sport in which the entire field of competitors runs all day in excess of 200 mph, the Carrera GT’s power impresses him. “I lost the concept of speed a long time ago,” he says in a Virginia drawl. “But this Jag feels pretty good.”

Like another South African import to North America, the Noble M400 is a gem—a diamond in the rough, to be sure, but true motoring enthusiasts will want to snap one up just for the pleasure of experiencing all that they hold sacred. “I like simplicity,” Burton says, “and I see this car as being simple.”

Certainly, Noble need not make apologies for its chassis design, which is one of the world’s best. In the United States, the rolling body and frame are sold as a stand-alone product (priced at $66,900) that is imported by 1G Racing in Hamilton, Ohio. The drivetrain adds about $28,000 to the cost. The Ford-built engine, sold separately, with some assembly required, is not unique, but it is powerful.

The Noble makes do with a 3.0-liter Duratec V-6, a lightweight 24-valve, dohc powerplant that is as rugged as it is reliable. Dual ceramic bearing turbochargers help put 425 hp and 390 ft lbs of torque to the wheels. The engine is mated to a Getrag 6-speed gearbox whose ratios complement the engine’s power delivery. This power unit is enveloped in a time-tested multitubular space frame, a rigid construction of welded square and round tubes. The conventional suspension features modern geometry of upper and lower A-arms suspended by coils over dampers.

The Noble represents a lesson in compact packaging. The lightweight engine and gearbox combination is mounted transversely to conserve space. Exhaust and turbochargers reside in the hind section, while the cooling system rides up front. This layout enables the car’s length to remain less than 14 feet, and it provides an even front-to-rear weight distribution that ensures superior handling and maneuverability.

The Noble proudly displays its racing roots, with appointments such as roll-up windows, a push-button starter, and thin composite door panels. In a minor concession to tactile requirements, the exposed tubular roll cage is covered in black Alcantara. In fact, from the seats to the headliner, the entire interior is lined in the faux suede material. Burton notes with some dismay that the roll-up windows do not roll all the way down, which makes it impossible to hang an elbow out of the opening. Creature comforts may not be the Noble’s strong suit, but then, as we would discover, this car was built for racing on the track rather than touring the country roads of western Pennsylvania.

Readers may recall that we preferred the Porsche Carrera GT when it was pitted against a modern-day concours of the Ferrari Enzo, Ford GT, and Lamborghini Murciélago (“Supercar Showdown,” December 2004). For Porsche aficionados, comparing the Carrera GT to any car is an indignity, particularly when the comparison is to a vehicle valued at less than one quarter of the Porsche’s $440,000 price. But rather than pigeonhole the Carrera GT and Noble M400 in terms of their prices, we are considering them in terms of performance only, the stick by which all sports cars ultimately are measured.

And the stick is as good a place as any to begin. Atop the center console, the GT’s aluminum gearshift is capped with natural wood inlay, a nod to the balsa-wood knob in the 917, the first Porsche racecar to conquer Le Mans. In fact, the Carrera GT itself began as a Le Mans prototype racer that was later developed into a road car. Inhale deeply, and your olfactory receptors will confirm that the Porsche is trimmed in the finest of hides, from dashboard to headrest. Riding in the Carrera is like sitting in a giant patent leather loafer—one that has been equipped with Bose speakers.

The Carrera GT is powered by a mid-mounted 5.7-liter V-10 mated to a 6-speed gearbox. The monocoque chassis is formed of carbon fiber, elements of which are visible throughout the cockpit, along the doorsills, beneath the freestanding console, and on the backs of the seats. The suspension also derives from racing, employing coil-over dampers with pushrods and levers. The chassis, engine, and suspension make the Porsche a showpiece of racecar technology that is capable of reaching speeds of more than 200 mph.

A long wheelbase—10 inches longer than that of the Noble—aids the Porsche’s stability on uneven road surfaces, as we discover on the airstrip’s lumpy uphill pavement. The Porsche is 20 inches longer than the Noble, but less than an inch wider. The rear-mounted exhaust and catalyst plumbing take up the additional length. Although nearly all of the mechanical bits are housed within the wheelbase, the bulk of them reside behind the front wheels.

Our autocross provides a variety of fast and slow sections, and we are pleased with how well the big Carrera handles corners. Both cars exhibit slight understeer (what Burton calls “running tight”), but an occasional prod to the Carrera’s gas pedal helps loosen it and rotate the car for the next gate, though the unseen hand of a traction-control computer determines much of the Porsche’s behavior.

Leave the traction control on, and the Carrera GT still can be driven very quickly. Go too quickly, and the rear weight bias takes over; once rotation begins, it is nearly impossible to regain control. A skilled driver can—at low speeds—hang out the tail, smoke the tires, and leave long black marks all over the pavement. He may even do so intentionally.

By contrast, the M400 is more attuned to sudden changes of direction than to flat-out flying. The Noble inhales corners whole. Quick steering, plenty of grip, and the instant throttle response of the turbo V-6 create all the chassis rotation one can ask for. Even when it is riding on a set of worn Pirelli Corsa tires, the Noble is a joy to drive, and it has no difficulty keeping pace with the Porsche provided speeds do not progress too far into triple digits. Although it lacks electronic driver aids, the Noble rides more easily through the cones at any speed, a tribute to its excellent suspension geometry, chassis tuning, low mass, and diminutive size.

Because it is smaller and lighter, the Noble enjoys an advantage on a tight road course. Those who have had the pleasure of driving a Lotus Elise understand. Imagine an Elise with twice the power and more grip, and one that exhibits benign behavior when pushed to its limit. A good driver can take the Noble to the edge of its cornering capabilities, hang it out, and bring it back safely. The combination of the M400’s small size, light curb weight, and forgiving nature can be more than a match for the mighty V-10 from Leipzig.

On acceleration runs, the Noble is less composed; its short wheelbase follows the dips and lumps as a mogul skier would. While it maintains its straight-line stability, the Noble makes intimate contact with the road when moving at speeds in excess of 120 mph. At similar velocities, the Carrera GT offers a smooth, train-on-rails sensation.

In the end, these are two fierce, incredibly quick motorcars. Both accelerate to 60 mph in 3.5 seconds, reach 100 mph in just under eight seconds, and rocket through the quarter-mile timing lights in 11.4 seconds at faster than 130 mph. Both cars also have huge, fade-free brakes that instantly haul them down from triple-digit speeds.

Of course, racecars that have been transformed into road cars must, by definition, conquer real-world terrain, which is a commodity in rural Pennsylvania. Following a map to the nearest snaking mountain road, we make our way from Falling Rock—the new Frank Lloyd Wright–inspired hotel at Nemacolin—to Fallingwater, the celebrated house that the renowned architect designed and built. Along this stretch of road, our cars appear as out of place as the multimillion-dollar residence with a river running through it, but they handle as though they are in their elements.

On the smoothly paved road that leads to Fallingwater, the difference in everyday manners between the two cars becomes apparent. The M400’s whine is reminiscent of a V-6 hot rod and punctuated by the loud bark of the waste gates at every shift. This was the sound of Formula One racing in the late 1970s and early ’80s, when turbos ruled the tracks. The noise from the V-6 may not match the Porsche’s booming roar, but the smaller car’s light and responsive steering and perfectly spaced gearing provide ample entertainment. However, the sound of sand grains tink-tink-tinking off the undercarriage belies the Noble’s status as a road car.

The Porsche, on the other hand, exhibits road comportment that is akin to a sedan’s, thanks in large part to a longer wheelbase and better sound isolation than those of the Noble. The Porsche’s steering feedback is not as visceral, perhaps, but, to our surprise, the Carrera GT is more convincing as a road car than is the Noble.

Burton concurs. “These cars are bad to the bone, man,” he declares after our day of driving. “There are two serious racecars under all that shine. I like the way the little car handled the track, but for a night on the town, I like the Jag.”