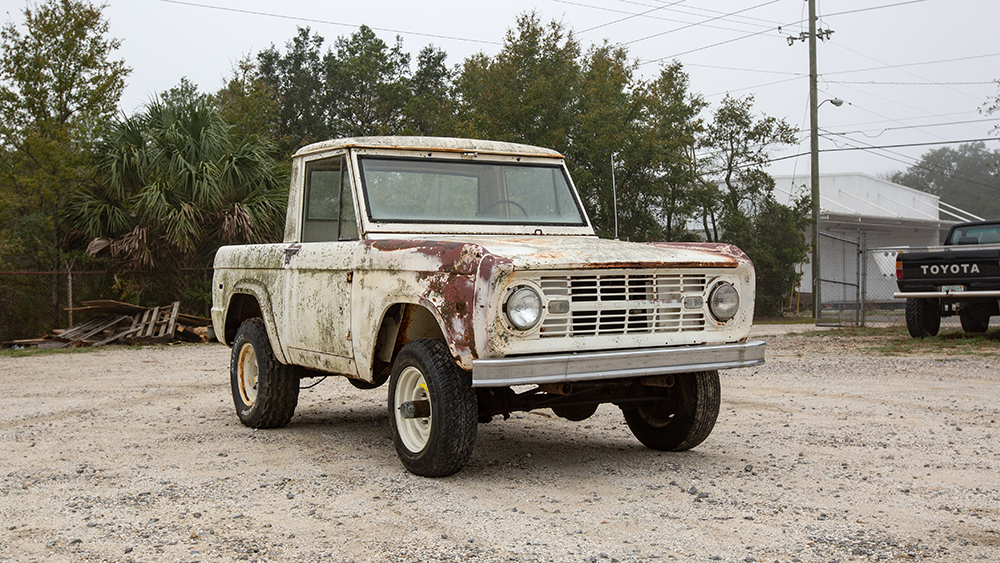 After that famed TV appearance back in 1994, Ford Broncos were all the rage. That chase may have even helped sales even though the model’s days were already numbered. And while the Bronco is again on the lips of Blue Oval enthusiasts everywhere who eagerly await the new 2020 model, demand for early-generation Broncos from decades past has yet to plateau. Models from the mid- to late-’60s are particularly coveted and one such hyper-rare roadster Bronco is about to be up for sale, with a full restoration to come.

Velocity Restorations, who specialize in four-bys, has a U13 Roadster that’s about to get the white glove treatment. It may not look like much now, but when they’re done, it’s going to be the nicest U13 you’ve seen.

What’s a U13 Roadster? Ford built a mere 5,000 of these units during the first three years of production. They were open-body roadsters with bucket seats. It had a 170-cubic-inch six cylinder, good for 105 horsepower, 4.11 ratio axles and a three-on-the-tree manual transmission. This very U13 was born one month after the very first Bronco left the assembly line. (Fun fact: Ford didn’t have their factory fully running yet, so the early Broncos were all built by the creator of the prototype, Budd Manufacturing.)

Of the 5,000 U13 Roadsters produced, a scant 250 or so are believed to still exist, so whoever snaps this one up will be pretty lucky. One similar Roadster went under the hammer at Barrett-Jackson Scottsdale back in 2014 for $33,000. The buyer of this unit can work with Velocity Restorations to participate in the customization and restoration process. The new owner will get his or her money’s worth; Velocity’s been restoring mid-’60s to late-’70s Broncos for years with fantastic results.