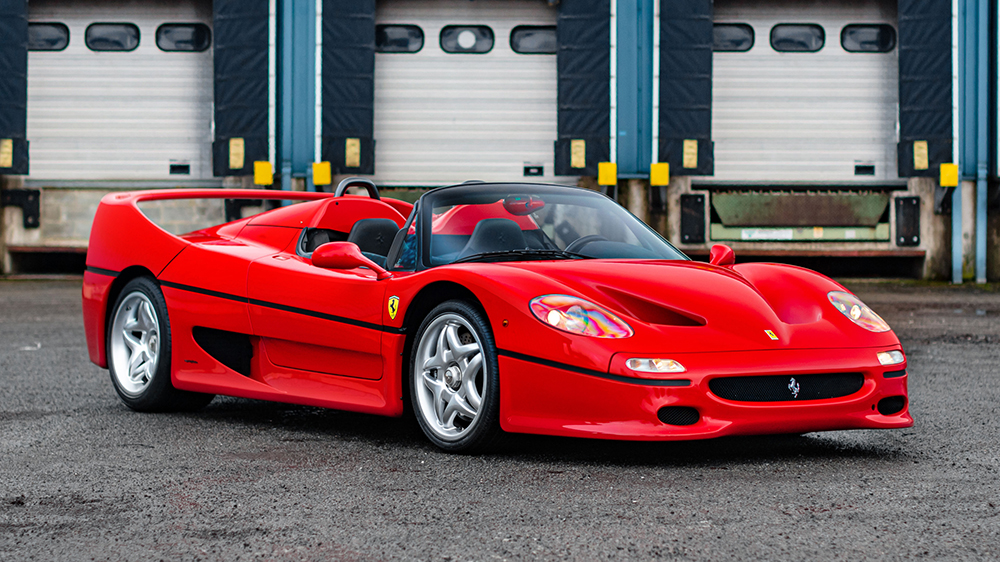 Just 349 sought-after Ferrari F50s were delivered to collectors between 1995 and 1997. Now, one such rarity is looking for a new owner.

The Prancing Horse in question, which was the 144th example to leave the marque’s factory in Maranello, Italy, has just been listed for private sale on RM Sotheby’s for €3.6 million (approximately $4 million at the current exchange rate).

To recap, Ferrari introduced the two-seater sports car to commemorate its 50th anniversary in 1996. As the successor to the F40, the F50 combined elements of Ferrari’s track beasts and Formula 1 racing expertise. Under the hood, it was fitted with a 4.7-liter V-12 derived from the 3.5-liter V-12 that Ferrari used in the F1 series a few years prior. This gutsy mill is capable of churning out 513 horses and 347 ft lbs of twist to propel the F50 from zero to 60 in just 3.6 seconds on its way to a top speed of 202 mph.

Suffice it to say, the F50 is a stunner, too. With coachwork by Pininfarina, the four-wheeler features a beautifully sculpted, carbon-fiber body and a removable hardtop that gives drivers the ability to switch between a closed berlinetta sports coupé or open-air spider.

Finished in Rosso Corsa paint, this particular model rolled off the line in 1996 and has had just one dedicated owner throughout its lifetime. It was rarely driven and has been meticulously maintained over the years. As such, the ‘90s gem is presented in immaculate condition and has only 4,491 miles on the ticker. It was also recently treated to a major service by Forza Service BV in the Netherlands that cost in excess of €25,000 (more than $28,000).

The blue-chip example comes complete with a toolkit, a soft top and a hardtop in the proper flight case, along with all the important paperwork and the coveted “birth book” detailing the car’s assembly at the factory in Maranello.

“As a minimally used example that is very well documented and offered with the coveted delivery ‘goodies,’ this highly desirable F50 would make a splendid acquisition for any level of marque collector, and is sure to distinguish any gathering of modern supercars,” the auction house writes.

The one drawback is the fact that the F50 is located in Belgium and will need to be imported to the United States—but, hey, that’s a relatively small logistical hurdle for a truly epic Prancing Horse.