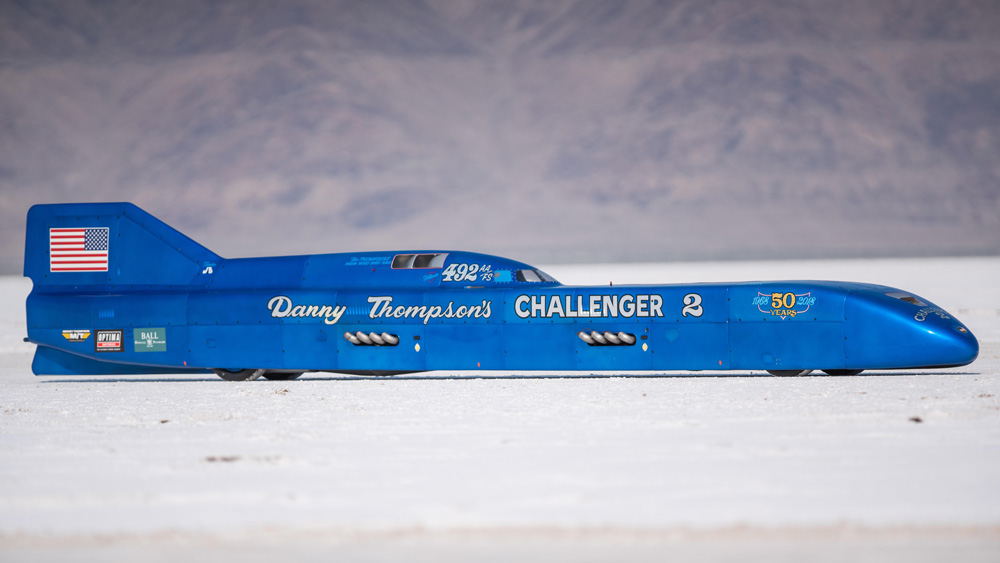 If ever an automobile proved the notion that they don’t make ’em like they used to, it would be the Challenger 2. The 32-foot-long, 36-inch-wide and 37-inch-high streamliner was designed and built by Mickey Thompson, a hall-of-fame driver and self-made engineer, who piloted the aerodynamic twin-Hemi-powered vehicle to a top speed of 406 mph during a preliminary run at the Bonneville Salt Flats in 1968. After rain shut down the flats for what could have been Thompson’s second, record-setting run, his racing team lost its sponsorship. Life also got in the way, and ultimately Thompson never returned to Bonneville, leaving his ultimate goal in the car unfulfilled.

But if ever an automobile proved that some things can improve over time—and with new technology—it would also be the Challenger 2. In 2010, some 20 years after Mickey Thompson’s death, Danny Thompson decided to finish what his father had set out to achieve: breaking a land speed record in the streamliner that Sports Illustrated once declared “a rolling textbook in sophisticated automotive design.” He pulled the Challenger 2 out from storage and began a seven-year journey restoring, retrofitting and updating the car to meet the Southern California Timing Association’s contemporary requirements.

On August 12, 2018, half a century after it had surged across the salt flats at more than 400 mph, the Challenger 2—with Danny Thompson behind the wheel—set a new SCTA AA/FS record of 448.757 mph, becoming the world’s fastest naturally aspirated, piston-powered vehicle. ““My dad’s design was so far ahead of its time,” Thompson says. “There are fewer than 15 people in the world who can say that they’ve gone over 400 mph in a piston-powered car. My dad did it and now I have, too.”

Danny Thompson in the cockpit of the Challenger 2.  Photo: Courtesy of Mecum Auctions.

Having accomplished his mission in the car, Thompson is now reluctantly parting ways with it, consigning the Challenger 2 at Mecum Auctions’ upcoming sale in Kissimmee, Fla. “This is scarier to me than driving the car,” he says of his parting with it. “We borrowed a lot of money and finagled a lot of things to get the job done [at Bonneville]. Selling the Challenger 2 at auction is devastating to me, but it’s necessary.”

Should the streamliner meet its reserve and sell—Mecum specialists project the car to bring as much as $1.5 million—Thompson can only hope that it is passed on to a collector who has the space and the desire to display it and share it with the public. “There’s no sense in hiding it away,” he says.

Taking a more romantic stance, the 70-year-old land-speed record holder imparts another message to the car’s future owner: “Treat her with respect; she deserves it. She’s earned her way.”

Another high-performance, head-turning vehicle is also set to cross Mecum’s auction block next month. Like the Challenger 2, this unique speed machine, a 1966 Superformance Ford GT40 MKII, earned every accolade that it’s received.

Typical Hollywood success stories start with an audition, and such was the case for the GT40 MKII at the center of the recent film Ford v Ferrari, a Fox Studios production that chronicles the Ford Motor Company’s journey to outperform Ferrari at the 24 Hours of Le Mans. The hero car (driven by Christian Bale, who plays racer Ken Miles in the film) is a recreation of the 1966 GT40 MKII that sped to victory at Le Mans. Faithfully built by Superformance, it’s one that the specialty automaker painstakingly constructed even before it had been selected as the film’s automotive partner. The car, which ultimately appeared on screen in the film, was Superformance’s motoring audition.

A recreation of the 1966 GT40 MKII that won at Le Mans.  Photo: Courtesy of Mecum Auctions.

Powered by a specially prepared Roush V-8 engine that cranks out 604 hp and 572 ft lbs of torque, the car is comprised of an electro-galvanized steel unibody with a pressed steel roof. It also flaunts a plethora of period-correct details, including toggle switches, screws, seats covered in Alcantara, Smiths instruments, and a Moto-Lita steering wheel.

Finished in that iconic pale blue livery and signed by Charlie Agapiou, Ken Miles’ 1966 crew chief, and Miles’ son Peter, this movie star MKII is anticipated to sell for as much as $325,000.