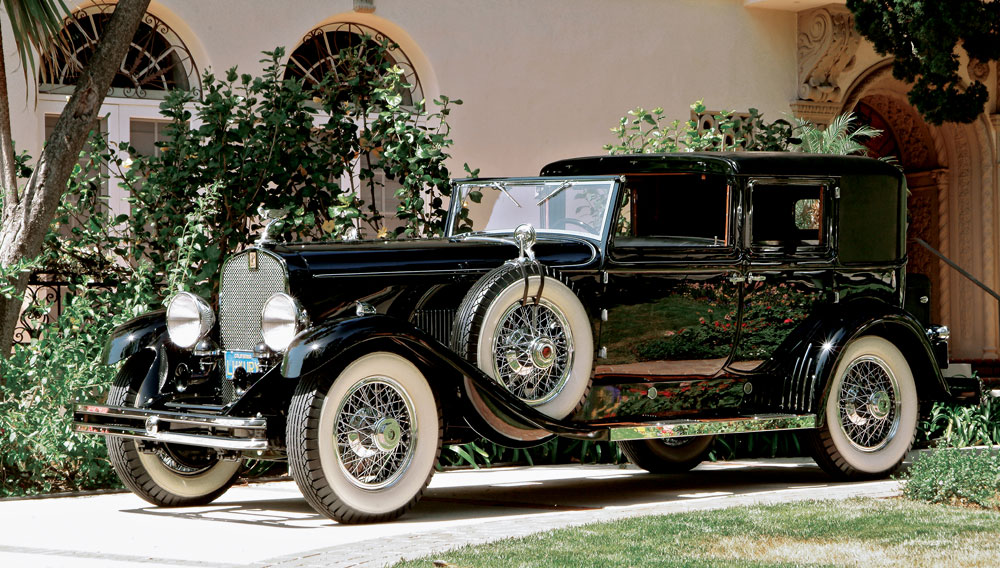 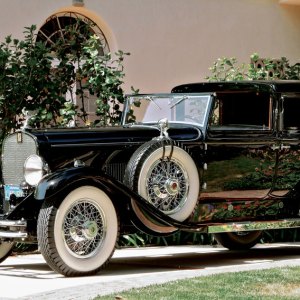 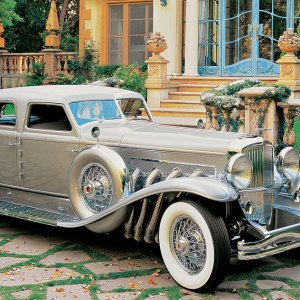 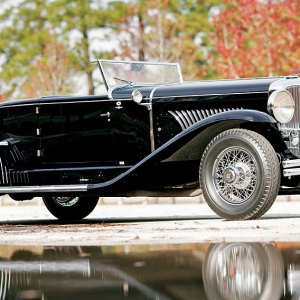 Only a select few American automobiles have joined the ranks of the world’s four-wheeled icons. The Model T, Corvette, Mustang, and original Lincoln Continental were commercial successes that set the standards for style in their times and went on to kindle the passions of collectors; but with its design, flamboyance, and presence, one make and model stands well above these classics: the Duesenberg Model J. Though only 481 examples of the car were built during its nine-year production run from 1928 to 1937, the big J continues to embody uncompromised engineering and aesthetic perfection even to admirers with limited knowledge of automotive history.

“I haven’t found any car from its era that is close to being the Duesenberg’s equal in terms of style, engineering, quality, or performance,” says Randy Ema, who has transformed his lifelong fascination for the marque into a business devoted to preserving and restoring Duesenbergs. “Unlike modern exotic cars, where customer participation in a car’s creation is limited primarily to color choices, Duesenberg allowed its owners wide scope in personalization.”

Some of these owners were as much responsible for the Model J’s renown as were the vehicle’s exclusivity, superb quality, and high performance. Actors Clark Gable and Marion Davies both drove Duesenbergs. Gary Cooper bought two of them. These mobile masterpieces quickly became the preferred cars of affluent men and women who could afford the princely price tag of as much as $20,000—more than 20 times the cost of a typical Dodge in 1930. Though the Js were heavy, massive cars, their muscular engines—whose eight cylinders were positioned in a row rather than in a V formation—generated 265 hp, sufficient to provide stirring acceleration. A supercharged version, the SJ, of which only 38 were built, developed 320 hp and was said to be capable of reaching 140 mph.

This remarkable machine emerged from the marque’s chaotic beginnings in Des Moines, Iowa. There, in 1913—when horses still shared the nation’s roads with automobiles—brothers Fred and August Duesenberg, an engineer and a machinist, respectively, set up shop. During their company’s early years, the pair created a number of successful racing cars and, with the advent of World War I, became involved with aircraft engines. But if their automotive skills were unquestioned, their financial acumen was sadly lacking. By the time they tried to enter the burgeoning passenger-car market with the 1921 Model A, Duesenberg, a publicly traded company, had come under the control of majority shareholders Newton E. Van Zandt and Luther M. Rankin.

The Model A was fast and attractive, but the brothers’ perfectionism and labor-intensive methods kept production numbers too low to support the enterprise. In 1926, manufacturing of the Model A ceased after only 650 examples had been built, and Errett Lobban Cord acquired both the company and Fred Duesenberg’s services. (August was no longer involved with the company at this point.) The Model A’s successor, the more sophisticated Model X, fared worse than its sibling: Only 13 vehicles were made. But by this time, Cord had set Fred Duesenberg to work on a clean-sheet design that would wrap the engineer’s genius in an appropriately unforgettable package. The new car was dubbed the Model J.

This particular Duesenberg has provided Randy Ema with both a vocation and an avocation. Though the nondescript facade of Randy Ema Inc. gives no hint as to what goes on inside, some of the best-known examples of the Model J have passed through this building in northern Orange County, Calif., and many others have benefited in one way or another from the company founder’s hard-won expertise.

On entering, visitors might mistake the facility for a small machine shop or local printing plant from the 1930s. From the reception area—where the portrait of a stern, gray-haired Fred Duesenberg hangs—a long, narrow room leads into the work space, which consists of a maze of subdivided areas filled with various auto parts meticulously laid out on tables. Some of the parts are finished in bright chrome, others enameled in Duesenberg’s trademark apple green. Despite these automotive treasures, however, the heart of Ema’s business is his office. It contains some 28,000 surviving Duesenberg drawings, and its file cabinets are bulging with information on the 481 Model Js that the company built, 378 of which still exist. “I’ve seen all but five of them,” Ema says. More than 60 have passed through his shop.

Another key area of the facility stores original patterns and molds for many rare Duesenberg parts. Thanks to Ema’s extensive collection and the capable services of a foundry, numerous Model Js that might otherwise remain idle continue to take to the roads. The authenticity such components confer on the cars is important to Ema and his customers. In fact, so authentic are these parts—and so extensive are Ema’s resources—that his shop could easily pursue the ground-up construction of Model J numbers 482 and 483—or as many new Js as the market could absorb. But for Ema, such a bold experiment is out of the question. “I don’t want to change history,” he says. “I am a historian.”

Ema does not speak figuratively. While working on various classic cars, including his own Auburn—another product of the Auburn-Cord-Duesenberg group established in 1926 by Errett Lobban Cord—Ema earned a degree in history from California State University, Fullerton. (He remains thoroughly fascinated by a variety of historical topics.) He opened his first restoration shop in 1976, and success followed. The first of seven Duesenbergs he restored to win a trophy at the Pebble Beach Concours d’Elegance did just that in 1978. A long line of clients—including some of the most famous names in car collecting—has kept him sufficiently busy to necessitate two moves into larger quarters over the years.

Duesenberg owners, however, do not make up Ema’s entire customer base. As corporate relatives of the Duesenberg, Auburns and Cords naturally are welcome in the shop, but so are a number of other interesting machines. Ema has happily serviced and restored an eclectic mix of vehicles that runs the gamut from classic Lincolns, Mercedes-Benzes, BMWs, and Bugattis to such oddities as a 1950s vintage Messerschmitt microcar. His personal collection, which comprises some 30 cars, reflects this diversity of interests.

Still, Duesenbergs permeate the shop and absorb much of Ema’s time and attention, as evidenced by the large archive of Duesenberg photos he has amassed. Many of these negatives and prints came from the factory, while others have been gathered over the years. He also possesses a complete collection of factory literature and catalogs, as well as various personal items once owned by Fred Duesenberg. More than souvenirs, these unusual items serve as reference points for re-creating missing parts, choosing paint and upholstery schemes, and identifying and reversing historically inaccurate modifications that may have been made to vehicles over the last eight decades. When Ema declares a component or a complete car to be authentic, he can offer substantial material to support his opinion. “I don’t have to guess,” he says.

These days, Duesenberg ownership is far too serious a business for guesswork. After Fred Duesenberg’s death in 1932 and the closure of the factory in 1937—a casualty of the Great Depression and E.L. Cord’s high-flying financial ways—owners and enthusiasts sought and acquired available spare parts for the Model J and preserved the blueprints that now reside in Ema’s workshop. These devotees not only enabled the surviving examples to remain on the road, but also passed on their love of the marque to succeeding generations of collectors, whose dedication to the cars has kept valuations high. For today’s Duesenberg faithful, Ema’s modest shop serves as a kind of shrine, safeguarding the automaker’s past and ensuring its future.

Aspirants to Duesenberg ownership are in good company. It would be difficult to find a respected public or private automobile collection containing American classics that does not have at least one Model J. The late William Harrah, for example, had as many as 15 Duesenbergs in his enormous Reno, Nev., museum, though not all were Js. Another exhibit, the Nethercutt Collection in Sylmar, Calif., showcases one of the most elegant examples of the breed, a stunning SJ created for display at the 1933 Chicago World’s Fair.

The leap from aspiration to acquisition, however, will be an expensive one. Over the past decade, transaction prices have increased from the mid- to high-six-figure range for “average” Model Js. In the past two years, several have sold at auction for prices ranging from $1.4 million to $1.7 million, and David Gooding of Santa Monica, Calif.–based Gooding & Company auctioneers (www.goodingco.com) says the rarest and most desirable models—such as the two SSJ two-seat Speedsters built for Gary Cooper and Clark Gable, or the similar Weymann-bodied boattail cars—easily could command $4 million to $6 million.

Duesenberg Js are not particularly susceptible to the cyclical price patterns that plague some other collectible cars. They hold their value well. The market does have its quirks, however. Reproduction or replacement coachwork has a strong negative effect on Duesenberg prices; so do major deviations of any kind from original specifications. As Gooding points out, the value of authenticity is higher here than with many other marques that often welcome “improvements” and “re-creations.” A prospective buyer would do well to consult an acknowledged expert in the field to verify provenance before writing a check.