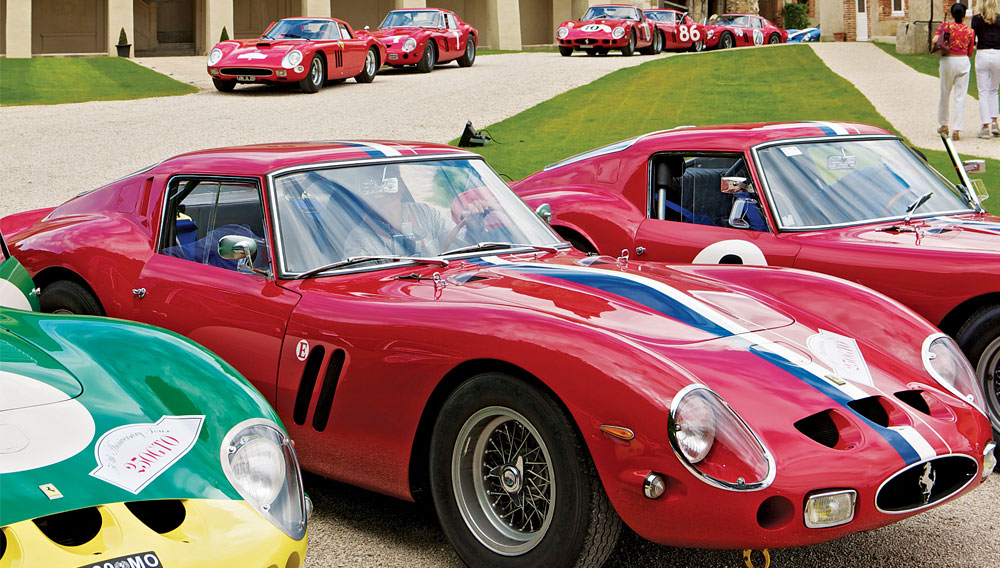 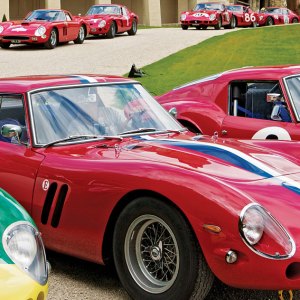 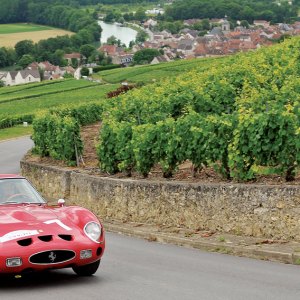 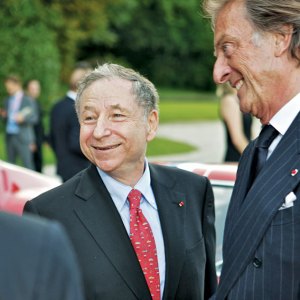 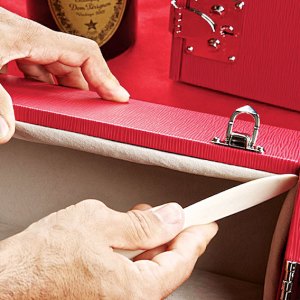 Once upon a decadent time, around 1670, Pierre Pérignon, a young Benedictine monk and cellar master at the Abbaye d’Hautvillers, near the town of Épernay in northern France, applied his intuition and trial-and-error techniques and created Champagne. After taking the first sip of his sparkling wine, he called to his fellow monks, “Come quickly—I am drinking the stars.”

Or so goes the myth. In truth, the quote is apocryphal, and Pérignon actually tried to remove the bubbles from his wine; he considered them a fault that could break the glass in which the wine was bottled. Champagne as we know it today did not emerge until two centuries later.

However, Pérignon did improve the quality of the abbey’s wines by establishing ideal heights for the vines, and, most significantly, by developing a method that limited the juice’s contact with the grape skins. The latter enabled the abbey to become perhaps the first winery in the Champagne region to produce truly white wine—instead of pink—from red grapes. Pérignon’s wines gained enough renown to be served at the Trianon Palace at Versailles, where they became a favorite of the court of Louis XIV.

Exaggerated as they had become, Pérignon’s contributions to the creation of Champagne led Moët & Chandon to attach the monk’s name to its brand of premium Champagne, beginning with the 1921 vintage, which was not released until 1936.

In Italy during that 15-year interim, an ex-artillery grunt and self-taught car builder named Enzo Ferrari was working for or collaborating with Alfa Romeo—at various times as a test-driver, racecar driver, dealer, or racing-team director. In 1939, Ferrari left Alfa Romeo and formed his own company; by 1947, the firm was building Ferrari-branded racecars. In 1962, the company crafted a machine that established a new standard for sports cars. It was equally suited to road and track, and equally ferocious on either. The 250 GTO (which stands for Gran Turismo Omologato, Italian for “grand tourer homologated”) was so powerful and so perfectly balanced that it reduced sports-car racing to a matter of follow-the-Ferrari. Today the 250 GTO is considered, with few quarrels, the finest and certainly the most coveted Ferrari ever. But similar to how the bubbles in Champagne remain despite Pierre Pérignon’s effort to remove them, one might argue that the Ferrari 250 GTO exists in spite of the man behind the marque’s name.

Prior to 1962, most Ferraris had the aerodynamic grace of a Coke machine, which was consistent with the stance of Enzo Ferrari, who once declared, “Aerodynamics are for people who can’t build engines.” Ferrari authorized development of the 250 GTO—in secret and as a response to Jaguar’s new GT racecar—but early in the process, as part of a purge of employees who were opposed to his wife’s prominent role in the company, Ferrari fired Giotto Bizzarrini, the project’s chief engineer. Mauro Forghieri took over and, with designer Sergio Scaglietti, bet his future on aerodynamics, quietly defying Enzo’s edict.

The 250 GTO’s combination of a silhouette shaped by Scaglietti based on wind-tunnel studies, a lightweight body, a 5-speed gearbox designed by Porsche, a ground-scraping center of gravity, and a 3-liter, 300 hp V-12 transplanted from Ferrari’s 250 Testa Rossa proved unbeatable. The 250 GTO brought fame to what are now legendary racing surnames: Hill, Ireland, Gendebien, Hawthorn, and Rodri­guez. For three consecutive racing seasons, from 1962 through 1964, 250 GTOs garnered Ferrari the Manu­facturers’ World Championship for GT cars.

Together, Dom Pérignon and the Ferrari 250 GTO form the perfect pairing: dual icons to be celebrated as often as possible, such as every significant anniversary of either. The most recent occasion was in July, when Dom Pérignon uncorked some of its grandest vintages to pour for the nearly two dozen 250 GTO owners who had gathered near Paris to commemorate the car model’s 50th anniversary and drive their precious but robust vehicles in a five-day rally along the 17th-century Champagne delivery route from Épernay to Versailles via the Loire Valley. On their way through the valley, the drivers and their copilots stopped at Michelin-starred restaurants for meals of lobster and veal, and caviar and sea urchin, each paired with oenothèque Doms; they stayed overnight at Relais & Châteaux hotels, as well as authentic châteaux. The celebration culminated in a soiree at the Palace of Versailles, where Louis XIV once offered Pierre Pérignon’s wine as a royal blessing.

This anniversary bash, coordinated by GTO devotees Kathy and Peter Sachs, also afforded the GTO owners the chance to drive laps around the cars’ old romping grounds. First was the ghostly, broken, mostly abandoned Circuit de Reims-Gueux, former home of the French Grand Prix. Next were the public streets and restricted stretches of the Sarthe circuit at Le Mans, which were still warm from June’s 24-hour race.

Ferrari built only 39 examples of the 250 GTO, from 1962 to 1964 (36 in what has become known as the first series and three in the second series, which has a slightly altered design). All of the cars have survived, and although they are scattered around the United States, Mexico, and Europe, the majority are certain to show up at any formal event sanctioned by the loosely woven 250 GTO owners’ club. (The club, one of the auto world’s most exclusive, has no officers or monthly meetings, and the membership fee is whatever one pays for his or her car.)

The 250 GTO’s manners remain impeccable, and some cars can still attain their original top speeds of 174 mph. “There are so few cars that achieve this level of sheer drivability as well as sheer sculptural elegance,” said rally participant Nick Mason, the mostly retired drummer for Pink Floyd and a 250 GTO owner for more than three decades.

Earlier this year, a beryl-green 250 GTO built for Sir Stirling Moss—but never raced by the Englishman, whose competition career ended with a 1962 crash at Goodwood—became the world’s most expensive automobile. Seattle-based cell-phone-industry billionaire Craig McCaw bought the car from Dutch-born winemaker and car collector Eric Heerema for $35 million. A new GTO cost $18,000 in the 1960s, and they were changing hands in the late ’70s for a paltry $86,000, which is the price Mason paid for his car. McCaw brought his multimillion-dollar pride and toy to France for the rally and acknowledged no buyer’s remorse, calling the car “a masterwork that has the distinction of being the last front-engine racecar built by Ferrari, and a very pretty car that drives rather well.”

Because these cars are considered masterpieces, it follows that owners are reluctant to allow strangers, especially freewheeling automotive journalists, to drive their vehicles. With a car such as this, no accident is minor. Indeed, rally participants Christopher and Ann Cox, while motoring toward Le Mans, collided with a civilian car. Ann suffered a broken leg, and the 250 GTO sustained heavy damage to its front end in what has been widely described as the world’s most expensive car crash.

Nevertheless, Charles Knill-Jones—engineer, sports-car racer, and minder of Nick Mason’s 40-car collection—took pity on my groveling and offered the navigator’s seat in Mason’s GTO for a 120-mile jaunt from the abbey to the baroque, moated Château de Vaux le Vicomte, southeast of Paris.

A 250 GTO does not deliver a luxurious ride. The interior consists of bare aluminum, naked chassis tubes, and seat cushions that feel like paper napkins. Noise levels approach bedlam, necessitating headphones to preserve eardrums and allow conversations (via intercom). Oil and gasoline fumes storm the cabin through a dozen ducts; many drivers have carbon-monoxide detectors on their dashboards. For “air conditioning,” simply open the driver and navigator doors when the car stops at intersections. Acceleration is typically a clattering, complaining stutter.

But remember, a 250 GTO is a racehorse. Its fuel-air mixture—delivered by six dual-downdraft Weber carburetors mounted to a dozen polished trumpets—mists and burns best at 9,500 rpm. The gearing is set not for today’s speed-crimped motorways, but for the Mulsanne Straight at Le Mans, where overdrive fifth will carry the car to nearly 180 mph.

On an empty stretch of back road, Knill-Jones had the Ferrari on the cam and touching 135 mph. The wood-rimmed Nardi steering wheel was barely twitching. This is where the 250 GTO belongs. Only at high speed, with the engine roar becoming a heldentenor wail, does the car find its song, its supreme element.

“They represent the hot passion and hot technology of people like [designer Sergio] Scaglietti and [Enzo] Ferrari,” di Montezemolo said of the 250 GTOs back at the abbey, before the rally commenced. “So there is a great degree of community between Ferrari and Dom Pérignon. You agree?”

Stéphane Baschiera certainly does. He is CEO of Dom Pérignon and its parent company, Moët & Chandon. “The code of Ferrari is the code of Dom Pérignon,” he said at the abbey. “It is a matter of uniqueness, of going beyond what is expected, of going to extremes. At the end of the day, it is the creation of a legend within a legend.”

Richard Geoffroy, Dom Pérignon’s cellar master, chose the wine list for the event’s meals and focused on the 2003 vintage. “It was a very abrupt season, not smooth,” he explained. “But a blend of 60 percent Pinot Noir and 40 percent Char­donnay berries lent itself to something very calm, peaceful, and a harmony all in the spirit of Dom Pérignon.”

Geoffroy also selected a 1996 vintage from “a moderately warm, windy season when for two weeks there were northeasterly winds blowing, leading to a dehydration [of the grapes] that made the illusion of ripening. So this year is as insolent as can be. It is packed full of energy, but trenchant without being aggressive. It has length. It has impetus. It has memory.”

The 1973 Dom was Geoffroy’s grand finale for drivers and guests. “This one is about high definition and about as close as it gets to what everybody expects from Dom Pérignon. The longer the ripening, the better, so the 1973 has a penetration, a precision, and that is its character.”

Geoffroy offered no evaluation of the 250 GTOs—his company car is a Prius—nor did he refer directly to any community or kinship between the wine label and the automobile marque, but he could have been describing Ferrari when he spoke in general terms about the Cham­pagne. “To me, the beauty of Dom Pérignon is in the scarcity and in being different,” he said. “It is a matter of going our own way, of always following our own path, and then allowing the world to decide.”