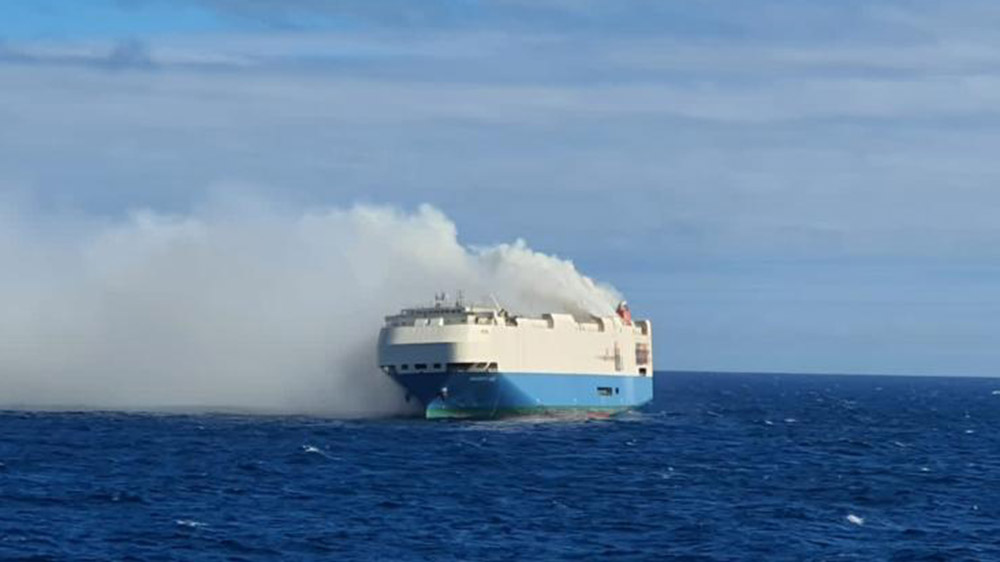 This isn’t isn’t the kind of burning rubber any sport car lover wants to see.

Thousands of vehicles, including some made by Porsche, Lamborghini and Bentley, are trapped onboard an abandoned and burning cargo ship that’s currently floating in the mid-Atlantic Ocean, according to news reports from around the globe.

A 656 foot-long ship named The Felicity Ace issued a distress signal on Wednesday after reporting that a fire had broken out on one of its cargo decks, according to the Associated Press. The ship, which had been en route to Rhode Island after leaving a German port earlier this month, was 200 miles off the coast of Terceira Island in the Azores when the blaze broke out.

Fortunately, the ship’s 22-member crew was evacuated and no injuries were reported, the Portuguese military said in a statement. The cause of the fire remains unknown as of press time.

Still stuck on the ship, however, is some very expensive cargo, including luxury vehicles made by some of Volkswagen Group’s most coveted brands, like Porsche and Lamborghini, according to Bloomberg. Citing an internal email from the German conglomerate, the news outlet reported that there were 3,965 vehicles onboard the ship, a number that included 1,110 Porsches.

A spokesperson for Porsche confirmed to Robb Report that several of its vehicles were among The Felicity Ace’s cargo and said it would offer support to customers and dealers affected by the blaze. It’s unclear exactly how many Porsche’s were affected, but Matt Farah, a YouTube automotive influencer and podcaster, claimed on Twitter that his custom-spec’d Porsche Boxster Spyder—which starts at $98,300—was onboard the burning ship.

The Boxster Spyder with Deman 4.5 motor and shorty gears is the best sports car of all time, hands down. I had it specced exactly as I wanted it. There is no moving on. https://t.co/egaYJV5VEC

Another user, Zerin Dube, pointed out that a pop-up alert on Porsche’s “Track Your Dream” site is alerting customers to  the fire: “We are aware of an incident aboard the Felicity Ace, a specialized cargo ship carrying certain Porsche vehicles,” the notice reads. “Your dealership will provide you with additional information on how this impacts you as soon as we have additional information and know the full scope of the issue.”

Meanwhile, The Drive reports that 189 Bentleys, at least 21 Lamborghinis and an unknown number of Audis were also being ferried across the Atlantic onboard the 60,000-ton ship.

When reached for comment, a representative for Volkswagen told Robb Report: “We are aware of an incident involving a third-party cargo ship transporting Volkswagen Group vehicles across the Atlantic. The vessel was on its way to North America. All crew members have been rescued and are safe. We are in contact with the shipping company to get more information about the incident.”

If this is sounding like déjà vu to Porsche lovers, it’s because this isn’t the first time that the automaker has had to deal with a blaze affecting a shipment of its prized cars. In 2019, a container ship carrying 37 new Porsches, including four rare 911 GT2 RSs, caught fire and sank while traveling from Germany to Brazil.