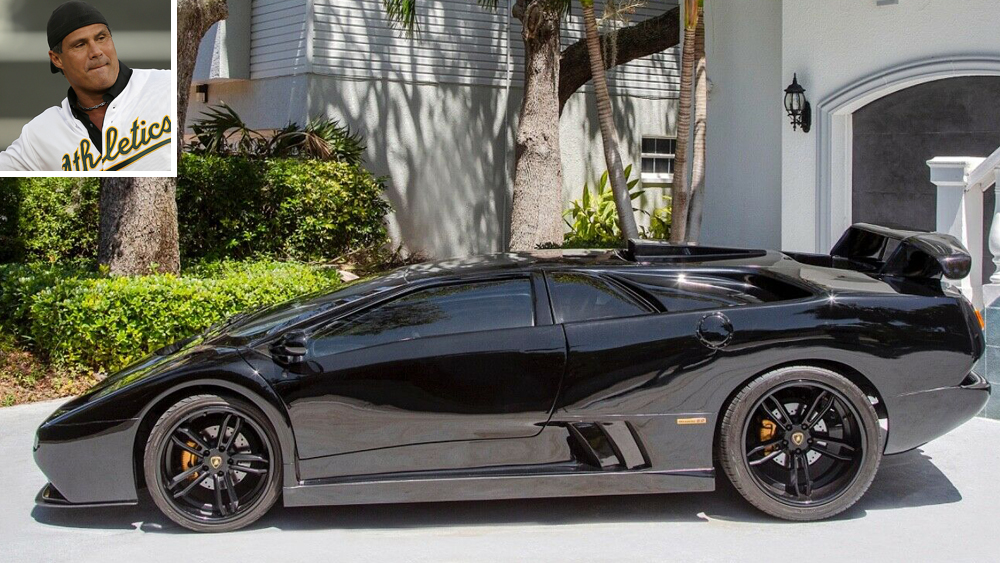 Are you hoping to shake up your car collection? Then let us direct your attention to one of the strangest vehicles you’ll likely see this year.

A 1999 Acura NSX that was converted to look just like a Lamborghini Diablo GT is currently up for bid on eBay Motors. If for some reason that’s not weird enough for you, just know that the person who commissioned the bizarre mash-up is said to be former big league slugger, Jose Canseco.

At some point around the turn of the millennium, Canseco acquired an NSX even though the car he really seems to have had his heart set on was a one-of-83 Diablo GT. The baseball player made over $45,000,000 during his 17-season career so presumably he could have just bought one of the $309,000 supercars for himself. Rather than do that, though, he enlisted the custom specialist who designed the Vaydor, the custom purple Infiniti G35 Coupe the Joker drove in Suicide Squad, to turn his NSX into a Diablo.

While the NSX and Diablo would not immediately seem to have much in common, they are both mid-engine supercars from the 1990s. And because of that they seem to have blended together surprisingly well. Details are sparse, but the builder appears to have taken the chassis and mechanical bits of the NSX and covered it with a somewhat convincing Diablo body. No technical specs are provided in the listing, other than that it is powered by a V-6 mated to a manual transmission. Assuming this it’s the same setup found in a standard 1999 NSX, that suggests the mill can pump out around 290 horses and 224 ft lbs of twist. That’s nowhere near as powerful as the Diablo GT’s V-12, which could deliver 570 hp and 465 ft lbs of torque, but it’s got some pep.

If you’re wondering why the current owner is willing to part with such a rare vehicle, the answer is simple—he needs more space in his garage.

“It is an EXTREMELY UNIQUE exotic sports car,” he writes in the action listing. “This car was once owned by Jose Canseco and TURNS HEADS EVERYWHERE. I am only selling this car because I am buying another Lamborghini and if I could keep two I would.”

If this exceedingly unusual NSX-Diablo mash-up has piqued your interest, you have until next Tuesday to put in your offer. Bidding has already reached $123,456, which is more than $50,000 below the reserve of $175,000. As of press time, 13 bids have already been placed since the car was listed Saturday. We’ll soon find out whether it meets its goal.