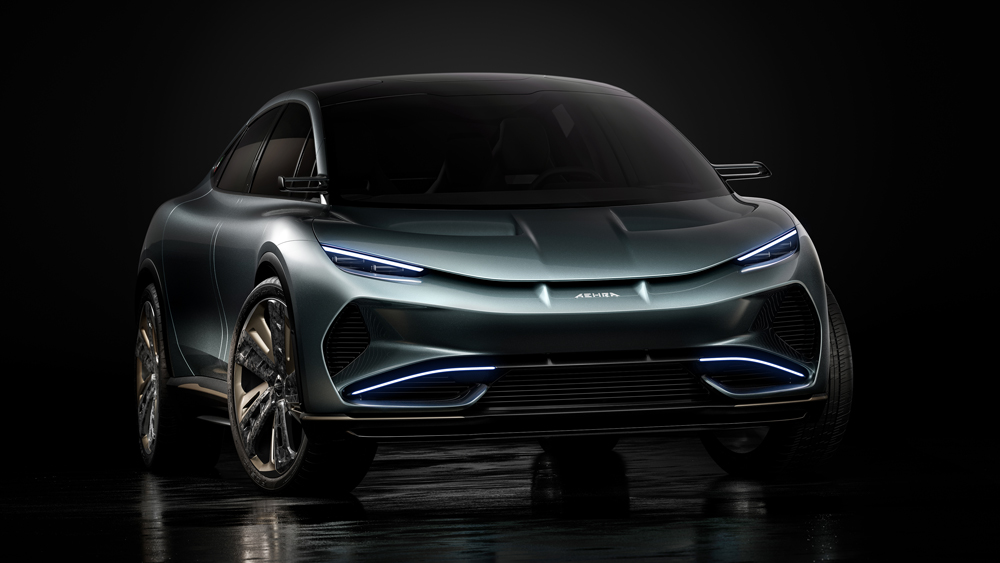 “For the first time in my career, we began with a blank sheet of paper,” says Filippo Perini, the ebullient Italian designer who previously penned the first iterations of the Lamborghini Aventador and Huracán. The result of that fresh start is the new Aehra SUV concept. Recently, Robb Report was in Milan for the launch party, surrounded by dry ice, local celebrities and waiters dressed like extras from a Daft Punk video. This start-up electric-car company seems determined to do things differently.

Aehra was founded by US-born Hazim Nada, a former oil trader who saw a gap in the market for an “ultra-premium” EV brand that majored on innovative design and “eco-sustainability”. The name Aehra (pronounced eye-air-ra) is a combination of the Latin word for “era” and the modern Italian word for “aerodynamic,” but the SUV itself has no official name.

Without doubt, the vehicle’s most attention-grabbing features are its “elytra wing” doors, which emulate the protective forewing shells (known as elytra) on flying beetles. They make the rear Falcon Wing doors on the Tesla Model X look like a half-measure—and when elevated, make the SUV resemble something from science fiction. And the doors open electrically, each one cutting into the roof to make access easier.

The Aehra’s design is ruthlessly aero-focused, resulting in a drag coefficient (Cd) of 0.21, which is remarkable for an SUV. To put that number into context, the Mercedes-Benz EQS, the slipperiest car in production, has a near-identical Cd of 0.20. “Our design language is driven by the air,” continues Perini. “Everything has to be functional, otherwise it’s just decoration.”

Seen in the metal (actually recycled carbon-fiber composite—only the crash structures are aluminum), the Aehra blurs the lines between SUV and supercar. Its flowing roofline, tiny overhangs and cab-forward silhouette are the antithesis of a traditional box-on-wheels SUV.

The absence of a frunk (“nobody uses them,” reckons Nada) allows for a low nose and very short hood, while the wheels are simply huge: 23 inches at the front and 24 inches at the rear. Other neat details include the long LED light strips and the camera door mirrors, the latter inspired by the tiny wings on Moto GP racing motorcycles.

Technical specs for the Aehra haven’t been finalized yet, but Nada says it will have “two or three electric motors” with a total output of between 750 hp and 815 hp. “Electric cars mean the barrier of entry to extremely high power has come down,” he says, “but we think 1,000 hp or more makes very little sense.”

The carbon-fiber construction also helps reduce weight to “20 percent less than comparable cars,” according to Nada, who quotes a target of under 4,400 pounds. This is despite the SUV’s sizable dimensions and very substantial battery pack, one that’s “in the region of 120 kwh” we were told. The goal when it comes to range also pushes boundaries at 500 miles, which is further than any EV currently on the market.

One thing we didn’t glimpse through the clouds of dry ice in Milan was the SUV’s interior, which will be unveiled at a later date. Clever packaging has been a priority, though; a 10-foot wheelbase (similar to a stretched “Li” version of the BMW 7 Series) is contained within a car similar in length to a Tesla Model S. The company promises enough space for “four NBA-size players” to travel in comfort, along with rear seats that recline like those in the first-class cabin of an aircraft. Nada hints at some patented new infotainment tech, too.

So, how will it drive? With adaptive air suspension, the four-wheel-drive SUV will offer a “gran turismo experience,” says Perini. “It’s a car you’d drive from A to A—what we Italians call a giro. You could travel just for fun.” The vehicle’s sporty dynamics will be complemented by an “authentic” soundtrack that emphasizes the noise of the electric motors and other hardware, rather than an artificial sonic presentation pumped through the speakers.

The SUV will be joined by an Aehra sedan—confusingly, also without a model name—due to be revealed in February of next year. The location of the factory is still undecided (“Italy or a nearby European country,” says Nada), but the two models will share 70 percent of their parts. Both are expected to reach showrooms in mid-2025, followed by a smaller, more affordable Aehra at a later date.

A price estimate of between $160,000 and $180,000 puts the SUV above rivals such as the Lotus Eletre and Tesla Model X, but costing less than the likes of the Lamborghini Urus and Aston Martin DBX. Aehra’s entry certainly promises to stand out, but the proof will be in the driving. And that is something we hope to do sometime in late 2024.