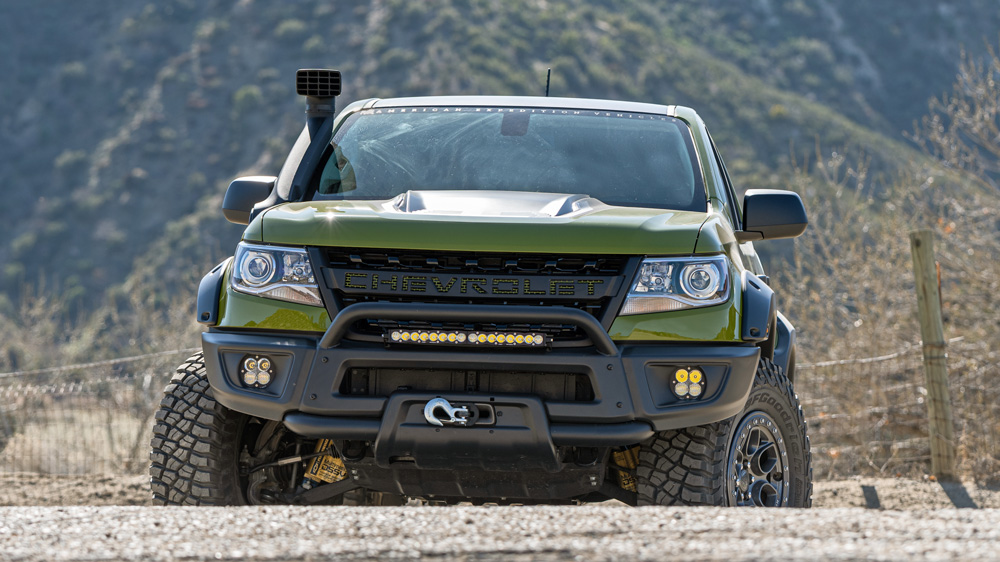 It’s a safe bet that from the day a youngster receives his or her first toy truck, the die is cast for a vehicular fascination that really never goes away. As anyone interested in motor vehicles will attest, a love for trucks, high-performance supercars and the grandest luxury sedans is not mutually exclusive. That point was made abundantly clear when an army green Chevrolet ZR2 Bison, heavily massaged by Detroit-based American Expedition Vehicles (AEV), parked aside the resident Porsche, dwarfing the latter and beckoning this driver to hoist himself onto the AEV running board and drive.

A little backstory is in order. Chevrolet’s Colorado series pickup trucks are what Chevy call “midsize trucks with full-size capacity.” Marketing-speak notwithstanding, the Colorado is on the smaller end of the pickup spectrum, in comparison to Chevy’s full-size Silverado series. The Colorado ZR2, with a high-riding, heavy-duty off-road suspension, four-wheel drive and optional 2.8-liter Duramax inline-4 Turbo-Diesel engine, starts at $47,595. It also offers a tempting platform from which to build a no-compromise adventure truck that is still maneuverable in civilian traffic and can, if duty calls, be pressed into domestic duties as quotidian as trips to the dry cleaner or restaurant drive-through (more welcome now than ever).

AEV is no stranger to Detroit, supplying plenty of burly off-road components and bodywork to major OEMs like Dodge and Jeep, as well as being a major manufacturer of aftermarket off-road performance parts. The co-development of the Colorado ZR2 Bison marks the first time AEV has worked with Chevy, as well as the first time Chevy has ever partnered with an aftermarket company. AEV’s Bison is aptly named for the largest mammal in North America. The result is a purpose-built truck with off-road, overland travel as its mission and technical terrain its preferred diet.

The crew-cab design, featuring four doors and short truck box, is the only configuration available for the ZR2, making its length of less than 213 inches ideal for most off- and on-road tasks. When you order a full-house Bison, AEV ladles on the goodies, stem to stern, in an effort to leave no exploratory escapade to chance. Our truck was fully equipped, including a Warn winch, integrated behind the front bumper, which makes off-road life a whole lot easier when—not if—the inevitable vehicle recovery becomes a reality.

Even though the Bison rides high, our truck carried additional skid plate protection, in addition to covers for the center section, transmission and rear differential. AEV HighMark fender flares ensure ample clearance for the massive 35-inch tall BFGoodrich All-Terrain KO2 tires, mounted on attention-grabbing AEV Crestone DualSport wheels equipped with tire bead-lock and protection rings. The optional 4.10 axle gear ratio provides respectable acceleration, and combined with the torquey Diesel engine (369 ft lbs at 2,000 rpm), one has the feeling that the big Bison can tackle any slope and any surface.

AEV’s signature green, called Zinc Chromate, turned a lot of heads. I rarely have other drivers trailing me or pulling up alongside when I park even the most unusual exotic, but the AEV elicited such attention, with motorists snapping pictures and offering plentiful thumbs up.

Maybe it was the snorkel. That, and the substantial bumper extensions, vertical tire mount and auxiliary LED lighting front and rear that make a statement of serious intent. How serious, we were not able to fully exploit, given the fact that so many off-road destinations, including federal and state parks, are off limits due to the current health crisis. A weekend herpetology expedition in the desert was thus scuttled, although a few short, albeit unchallenging, dirt-road adventures made it apparent the Bison could take most anything in stride.

The real surprise was the Bison’s ride quality on the freeway, so downright civilized and compliant thanks to the GM performance suspension. Inside the cabin of the ZR2, one feels as though little comfort has been sacrificed in deference to the vehicle’s rugged capability. And although the interior is hardly luxurious, it’s appointed tastefully and offers excellent front seating and good ergonomics.

Also surprising was the fact that noise within the cabin was noticeably absent, sufficient to enjoy a Haydn symphony over the Bose sound system during a Sunday morning drive on a near-deserted Los Angeles freeway. Coincidentally, the symphony was No. 100 in G major, the so-called “Military” symphony, which seemed fitting, given the invincible look of the Bison—and its arresting green livery—that would do any military vehicle proud. Ordered direct from AEV, and depending on upfitments, the ZR2 Bison lists for as much as $90,000.