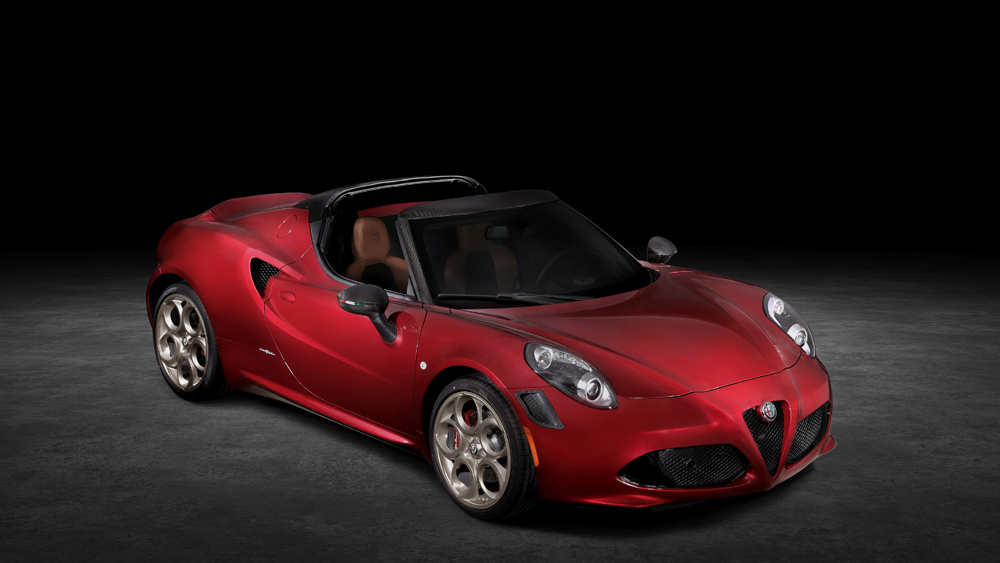 Alfa Romeo’s 33 Stradale is the most beautiful piece of Italian sculpture created in the 20th century. Such a bold statement could be argued but not easily disproved. The fact that Franco Scaglione’s design was only realized in 18 examples, built from 1967 to 1969, in no way diminishes the aesthetic impact of this heroic—if diminutive—supercar. That’s what it was, because in its era, the 33 Stradale (Italian for “road”) established the quickest time for the standing kilometer.

Its underpinnings were from the Alfa Romeo Tipo 33 race car, wrapped in a gorgeous body built by Carrozzeria Marazzi, a small Milanese coachbuilder who had a hand in many interesting projects, including Lamborghini’s Islero of the same period. The 33 Stradale also featured, for the first time on a production car, dihedral doors that are seen today on so many exotics. Now, the reflection of the most gorgeous road car Alfa Romeo ever made is evident in the new 4C Spider 33 Stradale Tributo, made to honor its legendary mid-engine forebear.

While the original 33 Stradale was powered by Alfa’s ferocious 2.0-liter V-8 engine and tuned for about 227 hp, the Stradale Tributo adds ten more horses with a 1,750 cc inline-four engine. A featherweight, the little 4C tips the scales at less than 2,500 pounds, and is good for a sprint from zero to 60 mph in 4.1 seconds. Few cars offer as much seat-of-the-pants fun as the Alfa Romeo 4C. Once ensconced in the carbon-fiber monocoque, drivers are treated to kart-like handling and the visceral punch of a 237 hp blender motor screaming mere inches behind the seat.

The 1967 Alfa Romeo 33 Stradale, of which 18 examples were made.  Photo: Courtesy of Alfa Romeo Automobiles S.p.A.

Some not-so-subtle design touches make the 33 Stradale Tributo even more special. Every example is finished in exclusive Rosso Villa d’Este tri-coat exterior paint, a brilliant metallic red familiar to anyone who has seen modern Alfa concepts at Italy’s Concorso d’Eleganza Villa d’Este. The red theme is carried over to the carbon-fiber monocoque chassis itself, which, for the first time, glows with a transparent red finish.

In homage to the 33 Stradale’s iconic Campagnolo wheels, the 18- and 19-inch design for the Tributo feature five deep holes, and are finished in a gray-gold color scheme like the originals. Bi-Xenon headlamps, a race-tuned suspension and center-exit Akrapovič exhaust add a performance edge to the vehicle. Composite sport seats in black Dinamica suede and tobacco leather are highlights of the interior, as are special plaques: the one on the central console bearing a sequential number.

With only 33 examples coming Stateside, and priced from $79,995, this is certain to be the greatest rarity within the marque’s most exclusive model range, which was launched in 2014. It also represents the last of the 4C Spider‘s run in North America.