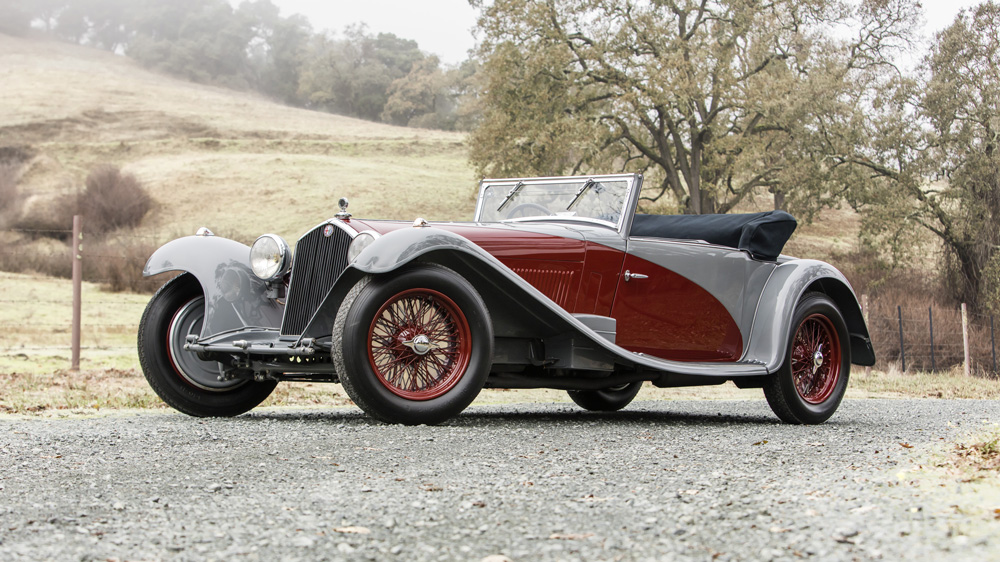 When the world’s most esteemed automotive auction houses roll into Scottsdale, Ariz., each January, a number of exceptional Italian sportsters are typically in tow. The year is no different. Most notable may be two lots from Bonhams—part of its sale at the Westin Kierland Resort & Spa. The two pinnacle examples could easily lead the category once the final gavel falls.

Just before the Bonhams auction reaches its halfway point, a 1951 Ferrari 212 Inter Cabriolet will grace the stage. Although the Italian automaker set aside 110 chassis of its sporty 212 for road car production during the early 1950s, only four were outfitted with a Cabriolet body built by Carrozzeria Alfredo Vignale. That distinction alone puts this early prancing horse convertible into rarefied territory; however, the cabriolet’s entire makeup is noteworthy.

The 1951 Ferrari 212 Inter Cabriolet on offer.  Photo: Courtesy of Bonhams.

“It’s an extremely rare car from a really exciting era,” says Jakob Greisen, motorcars specialist for Bonhams. “It’s an era when Ferrari was producing 12-cylinder cars that were hand-built and bespoke in every way, with coachwork and interior appointments all made to order and built only for the most discerning clientele.”

In particular, Greisen points to Ferrari’s youthfulness in the early 1950s—the company was still a newcomer when it built this 212 cabriolet—a key factor in establishing this particular car’s desirability. “It’s quite incredible that after only four years they could create a car like this,” he says.

Just four examples of the Ferrari 212 were outfitted with a Cabriolet body built by Carrozzeria Alfredo Vignale.  Photo: Courtesy of Bonhams.

While there are many facets of the car and its history that collectors can focus on, Greisen believes the quality of this cabriolet’s restoration is the most noteworthy. “The authenticity and correctness of the car today and its aesthetics are just stunning,” he says, adding that he observed the car’s restoration in progress about six years ago. “The detail to which the car is restored is remarkable. Every detail is exactly how it was from new. It’s really an amazing car.”

Bonhams forecasts the ’51 Ferrari 212 Inter Cabriolet to sell for as much as $2.4 million; but Greisen acknowledges that the winning bid will acquire more than just a classic, early-era Ferrari road car. “This,” he says, “is a 12-cylinder Ferrari that would get you into nearly any [classic car] event that you’d like to participate in.”

A car from an era when coachwork and interior appointments were all made to order.  Photo: Courtesy of Bonhams.

Nineteen lots later, the auction’s headlining star, a 1932 Alfa Romeo 8C 2300 Cabriolet Décapotable, will cross the block. Estimated to sell for more than $10 million, the prewar Italian speedster, according to Greisen, exemplifies car collecting’s trifecta. “In my book, there are three elements that make a car collectible and thereby valuable,” he says. “The engineering, the aesthetics and the history. When you have those three things in spades you have something very valuable.”

The 1932 Alfa Romeo 8C 2300 Cabriolet Décapotable to be presented by Bonhams.  Photo: Courtesy of Bonhams.

In terms of its engineering, the 8C was in a class by itself. It boasted an eight-cylinder engine with dual overhead cams, a supercharger and a highly advanced chassis for its time. “This was a 140 mph car in the 1930s,” Greisen says with a laugh. “That was when a Ford would do 50 [mph].”

A peek inside Alfa’s prewar history.  Photo: Courtesy of Bonhams.

This is one of only seven road cars bodied by Figoni on the 8C 2300 chassis.  Photo: Courtesy of Bonhams.

As for its history, this rare Alfa Romeo is one of only seven road cars bodied by Figoni on the 8C 2300 chassis, and it’s one of only five examples that are known to still exist. On top of that, the engine installed in the car is one that successfully ran in Le Mans in 1933. The Alfa Romeo 8C is, according to Greisen, a car that stands alone in terms of its desirability. In his opinion: “It’s the most collectible car from the prewar era.”