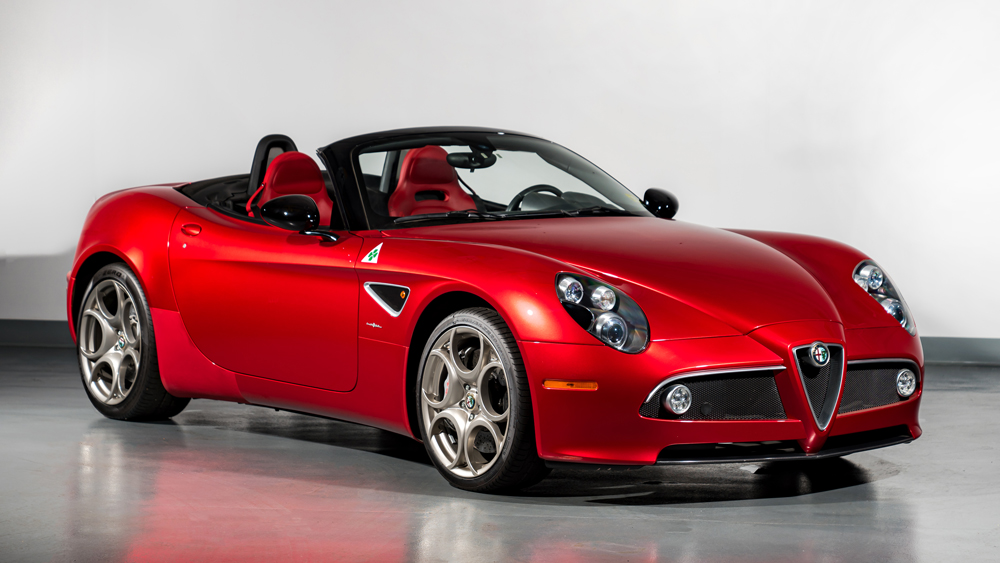 The final destination for some of the greatest cars ever made is sometimes a figurative—if not literal—cul-de-sac, a one-way dead end into which they have undeservedly been driven by a combination of market conditions, inept management or a clueless public. Or sometimes, on purpose, because they were always meant to answer a “What If?” question, vanishing as quickly as they appeared.

Two such cars are the Alfa Romeo 8C Competizione and its topless twin, the 8C Spider. When I first laid eyes on the coupe at Villa d’Este, I thought it was the most beautiful “new” car I’d ever seen. And I still might think that. Its design brief referenced the great Alfas of yore, and was meant to awaken the senses of Alfisti who had endured more than a decade of boring-if-competent Alfa Romeo sedans and hatches.

Formerly in the Oscar Davis Collection, this 2009 Alfa Romeo 8C Spider is one of only 35 examples sent stateside.  Motorcar Studios, courtesy of RM Sotheby's.

The marque already held a tenuous spot in the North American market when it forfeited its place there altogether in 1995, retreating to Europe and leaving a trail of Type 164 sedans and charming Duetto Spiders in its wake. I still want one of each. With the taste of this ignominious exit still in the automaker’s grille, it revealed the 8C nearly a decade later—a triumphant model entry that announced Alfa Romeo’s return to America.

The new coupe concept was unveiled at the 2003 Frankfurt Motor Show, the spider showing two years later at Pebble Beach. Production came shortly thereafter, with the 8C Competizione launched in 2007 and the 8C Spider in 2008. The lines of the 8C were pure genius. Wolfgang Egger of the Alfa Romeo Style Center knocked it out of the car-design park. The styling combined dutiful obeisance to Franco Scaglione’s Alfa Romeo 33 Stradale with new elements like a face featuring bi-xenon headlamps. And the grille read “Alfa Romeo” even by braille.

The reality is that, for decades, Alfas were four- and six-cylinder cars that begged for a V-8 engine—like the long-departed Montreal—and got it when Ferrari transplanted its brilliant 4.7-liter V-8 into Maserati’s competent GranSport, the platform and drivetrain on which the 8C was built.

Ferrari’s aluminum mill made 444 hp at 7,000 rpm, and 354 ft lbs of torque at 4,750 rpm. It remains one of the sweetest engines in recent memory. The fussy rear-mounted F1 transmission was another matter, but at least the paddles worked. When you look so good, does it matter whether shifts are accomplished with consummate precision or have an occasional hiccup?

So many times, the public says, “Build it and we will come!” Demand was strong, but the price was formidable. Paying close to $300,000 ($299,000 to be exact) for an Alfa was a big ask in the early 2000s. Only 500 examples each of the 8C Competizione and 8C Spider were planned, with just 35 examples of the 8C Spider allotted to the United States.

This 8C Spider, circa 2009, comes from the remarkable collection of Oscar Davis and is featured with other stellar cars from the late collector’s stable—an assemblage that will be crossing the ramp at the RM Sotheby’s sale in Monterey, Calif, from August 18 through 20.

The Metallic Rosso 8C paint scheme complements the intimate two-seat interior—dressed in red leather with carbon-fiber cabin detailing—as well as the black convertible top. Dark Silver 20-inch wheels feature aluminum-colored calipers with carbon-ceramic brakes. Alfa Romeo’s Quadrifoglio badge highlights both front fenders, as assertive an icon as any cavallino rampante. With only 3,733 miles on the odometer, this precious piece of Alfa Romeo history is ready to exit the cul-de-sac and drive.