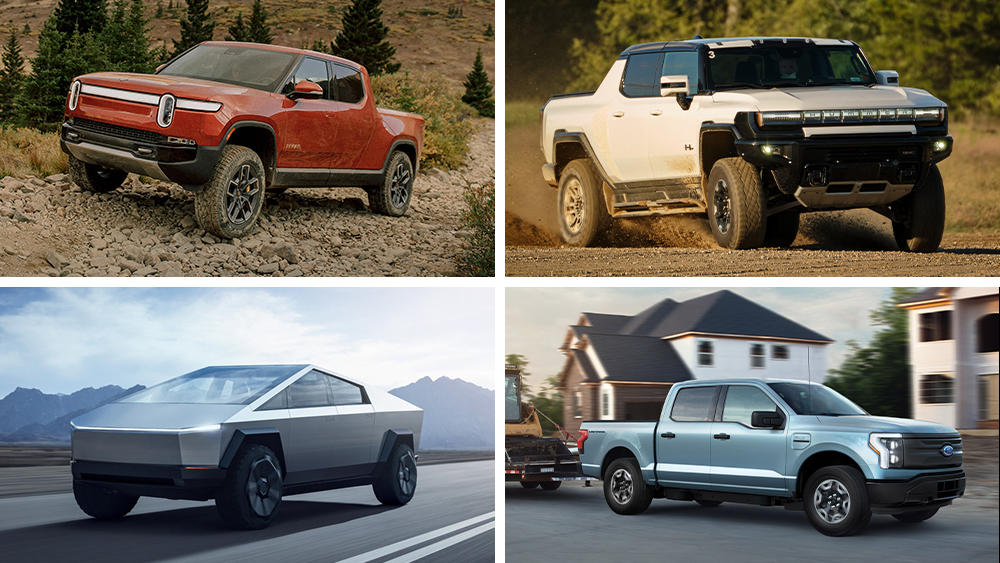 It’s taken a few years, but the first all-electric trucks are finally starting to hit the roads. The battery-powered pickup is a different beast than the rest of its EV siblings. It has to do everything expected of a car or SUV and be powerful enough to carry a heavy payload and tow even more weight, all without using up all of its battery. That problem has taken automakers—both legacy brands and start-ups—some time to resolve, but the answer appears to be here. Between now and 2024, a handful of electric trucks are scheduled to go on sale in the US. Here’s everything you need about some of the most exciting and capable EVs on the horizon.

It remains to be seen what will happen to Rivian, but no matter what, history will remember the brand as the first to put a battery-powered truck into production. The company started building its debut vehicle, the R1T, this past September, and what a way to make an entrance. The sleek pickup is built on the Irvine, California-based start-up’s proprietary “skateboard” platform and features a quad-motor drive unit that sends power to each wheel and churns out a combined 800 hp and 900 ft lbs of torque. Thanks to that setup, the pickup can carry a payload of 1,760 pounds and tow an additional 11,000 pounds. The brawny truck isn’t just about lugging gear and cargo though: It can also traverse intimidating terrain, like Utah’s infamous “Hells Gate,” with ease. The company also has an SUV, the R1S, in the works, but we have a feeling its $67,500 truck will determine if the brand has staying power or not.

More than a few eyebrows were raised when rumors started circulating that General Motors was thinking about bringing back the dormant Hummer nameplate as a line of EVs. After all, few vehicles are more symbolic of ‘90s excess and inefficiency as the hulking utility vehicle. A few months later, the old truism about where there’s smoke there’s fire was again confirmed when the automaker announced it was reviving the model as a zero-emission bruiser. While the reborn vehicle may be exponentially more efficient than its predecessors, it can still do everything they could and, actually, a whole lot more. In fact, the GMC Hummer EV may gave birth to a new class of pickup—the supertruck. The sold-out first edition of the brand’s electric vehicle is powered by a tri-motor—one motor on the front axle, two on the rear—drive unit that can spit out a hair-raising 1,000 hp and 1,000 ft lbs of torque. This allows it to carry a 1,300-pound payload and tow 7,500 pounds. How’s that for a comeback? Despite all its strength, the EV can still travel 329 miles on a single charge and has some nifty new features such as Crab Mode that allows it to drive diagonally. Starting at $112,595, it’s not priced like your average truck, but then again, the Hummer was never meant to be normal.

The F-150 Lightning won’t be Ford’s first EV, but it could turn out to be its most important. Unlike the Mustang Mach-E, which is a crossover SUV instead of a muscle car, the Lightning is a straight-up, battery-powered version of its best-selling vehicle. The Detroit giant knows better than anyone how seriously people take their trucks, and it’s clear that it has bent over backward to make sure the all-electric version can live up to the nameplate’s reputation. While other pickups on this list may offer more horsepower than Ford’s entry, the F-150 Lightning is capable of carrying a 2,000-pound payload and towing 10,000 pounds. The automaker knows its customers want a truck they can take to work, and with specs like these, the Lightning is more than up for the task. There are also some exciting new features we could see making life easier on and off the job site. These include a generator that allows for bi-directional power flow so that you can use your truck to charge another EV or, if times are really desperate, keep your entire house running for up to three days. Now, Ford’s biggest worry may be keeping up with demand for electric pickup, which will start at $39,974.

Elon Musk likes to talk a big game, and there’s no vehicle he’s been more effusive about than the Cybertruck. In fact, he went as far as to call it the “the coolest car [he’d] ever see” despite the fact that it’s supposed to be a pickup. Of course, at a glance, that can be hard to tell. The Cybertruck has an angular, geometric shape unlike any production vehicle we’ve ever seen. But it does have a bed where you can store gear and cargo (or the matching Cyberquad ATV). It also sounds like it’ll be pretty capable, with a payload and towing capacity of 3,500 pounds and 14,000 pounds, respectively. And it won’t lack for zip: The EV will be able to rocket from zero to 60 mph in less than three seconds, should you ever want to enter it in a drag race. The big question about the Cybertruck, of course, is whether or not we’ll ever see it on the road. The pickup was first announced in the fall of 2019 and was supposed to go into production before the end of last year. In January, the truck was delayed until at least 2023, which begs the question: Is this just a supply chain issue, or is the Cybertruck the next Tesla to enter a perpetual state of delay?

You didn’t think Chevrolet was going to let Ford release an electric truck and not do anything about it, did you? Late last year, the other half of Detroit’s biggest rivalry unveiled its own battery-powered pickup, the Silverado EV. Like the F-150 Lightning, its designed for the kind of guys who want to be defined by the kind of truck they drive. This means it was built for the job site. The Silverado EV is powered by a dual-motor drive unit that will churn out 664 horses and 780 ft lbs of torque (both figures are more than Ford’s EV). It can carry a 1,300-pound payload, which is 700 pounds less than its rival, but it can tow the same amount, so it’s not exactly a weakling. The $42,000 truck, which looks sleeker than its gas-powered sibling, also will offer bi-directional charging, which could come in handy if someone else’s EV’s battery needs topping up. One unique feature it has is the multi-flex tailgate, which significantly increases cargo capacity. Either way, the Chevy vs. Ford rivalry is ready for the EV era.

The Trucks That Didn’t Make the Cut

You may notice that the list above doesn’t include all the electric trucks that have been announced over the last few years. That’s because for every battery-powered pickup that looks like it’ll go into series production, there’s another one or two that vanish before they make it past the development phase. Take, for example, the Nikola Badger, which was cancelled in late 2020, about a half year before the company was charged with fraud by the SEC. Lordstown’s Endurance was supposed to be the first electric truck to hit the market, but has instead been pushed back to the third quarter of this year. The delay has not been good for the company’s bottom line. We were really looking forward to the Bollinger B2, but the brand appears to have pulled the plug on the truck and will now focus on commercial vehicles going forward. Finally, there’s the Canoo’s modular pickup, which we just don’t know enough about to let ourselves get truly excited. Yet.