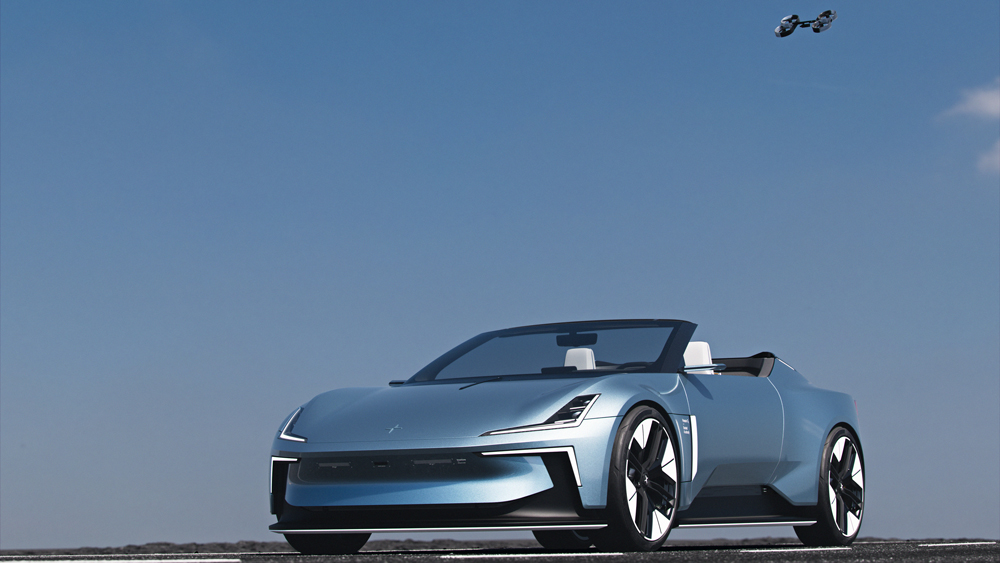 From the third-floor terrace of a Beverly Hills office building, many things are blue. There is the sky above, the Pacific Ocean to the west and here, astride a platform, an azure car with two-plus-two seating and a fast roofline. “If you compare it to the sky, it’s damn close,” says Maximilian Missoni about the vehicle’s appearance. The 43-year-old Austrian has served as Polestar’s head of design since 2018. The convertible in question is the Polestar O2, a concept car that points the way for the five-year-old EV brand.

I say “points” with a degree of literalness. The crease that curves between the running lights gives the O2 a broad upper palate, and the blacked-out chin spoiler is the lower mandible. Between these two elements is a tongue-like insert of body color. As with the rest of the car, the face reflects sublimated aggression, as if the polecat has eaten the canary. Looking too long produces the same woozy feeling that would come from drinking an Elderflower Frosé cocktail over at the Beverly Hills Hotel.

“It’s nice that you can feel it, that this car has all these amazing sculptural qualities,” Missoni says. Parent company Volvo was never quite able to play in the premium market, but EVs allow new chances, and Polestar can be itself: both sculpturally and technically. “Now we have clearly taken our own path, so nobody would say, ‘OK, that’s a Volvo,’” says Missoni.

Compelling design features abound on the retractable-hardtop O2, from the striking 22-inch wheels and the aluminum body’s deep waist, to the “aeroblade” taillight and the white interior punctuated by yellowish-orange seatbelts. But the godawful 15-inch tablet on the dashboard looks like an afterthought.

One of the standout features, however, may be the unexpected drone that lives in, and launches from, a compartment on the deck. Any why not? How many of us have not longed for a small autonomous aircraft aboard our weekend car? With a tap of the screen, the drone emerges from a hidden hangar behind the rear cowl and takes off from the black guide-rail that extends down the deck. The drone keeps pace at road speeds up to 56 mph, filming the cruise to one’s Malibu beach retreat or other scenic destination from a bird’s-eye perspective. But the O2 must be braked to a stop for the drone to land again and put itself away. The resulting footage can be edited on the dashboard, then shared to social media or just kept for posterity.

The drone keeps pace at up to 56 mph, but the car must be at a complete stop before the aerial craft can land and put itself away.  Photo: Courtesy of Polestar.

Beyond the Buck Rogers effects, the O2 elevates Polestar’s profile from its two production models to date, and takes up dramatic themes from the Polestar Precept—the swoopy, Tesla-fighting concept sedan that will eventually come to production as the Polestar 5, manufactured at the new factory in Ridgeville, S.C.

While the white interior—punctuated by yellowish-orange seatbelts—is impressive enough, the 15-inch tablet on the dashboard looks like an afterthought.  Photo: Courtesy of Polestar.

Polestar says it will launch three models in the next three years; a pair of SUVs are under development, and it isn’t a big stretch to guess the future of the O2. This concept car claims to redefine sports roadsters for the electric age. Whether a possible production version can live up to that hype or not, at least the drone will ensure the concept’s journey is well documented.