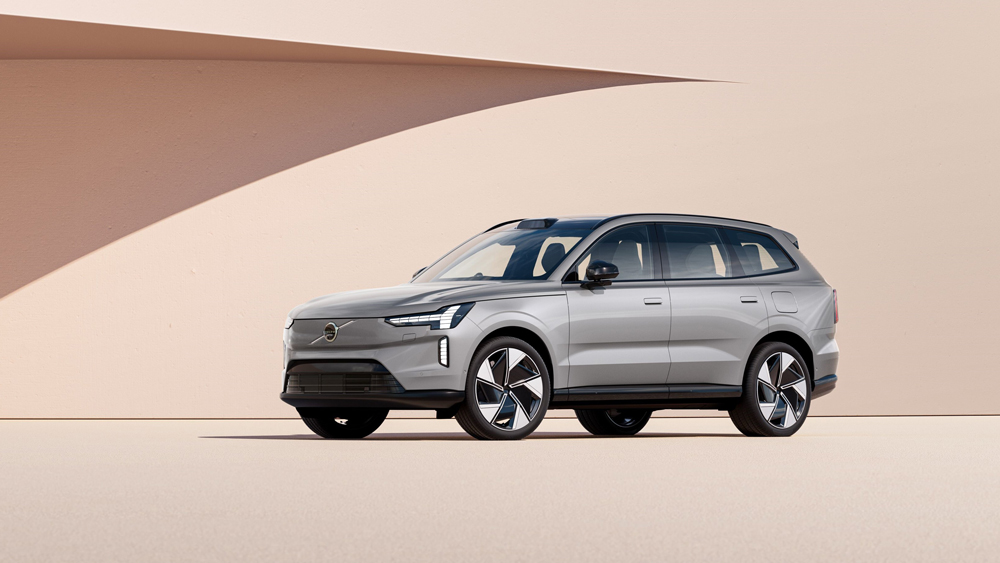 In a major step toward fulfilling its promise to go all electric by 2030, Volvo has unveiled the 2024 Volvo EX90, a spacious three-row SUV built on the brand’s first dedicated EV platform.

“This is not just the launch of a new model for Volvo, this is the launch of a new era,” said Jim Rowan, the CEO and president of Volvo Cars, at the EX90’s debut in Stockholm, Sweden. Rowan, who’s been in his current position since March of this year, and who previously served as CEO of Dyson and Blackberry, seems, at first blush, an unorthodox choice to lead a car company. However, the appointment of the self-described “tech guy” underscores Volvo’s commitment to pushing the bounds of innovation and safety, a pursuit that has defined the brand for previous decades.

Enter the EX90, the full-size SUV that will eventually replace the XC90, based on the same platform as the recently revealed Polestar 3. Two permanent magnet motors—one on each axle—give the EX90 a combined output of 496 hp and 671 ft lbs of torque. Volvo claims the 111 kwh battery will provide a range of up to 300 miles and will be able to charge from 10 percent to 80 percent in 30 minutes on a fast charging network. In addition, like its Polestar counterpart, the EX90 is also equipped for bi-directional charging, enabling owners to use their vehicles as a portable power bank, or potentially to feed power back into the grid.

While the Polestar 3 puts the focus on gratuitous spaciousness with its two-row, five-seat configuration, the EX90 is a proper three-row, seven-seat family hauler. The two related brands also employ very different design strategies.

“Where Polestar is more technical and cold, Volvo is very warm and human-centric,” says T. Jon Mayer, head of exterior design for Volvo Cars. “Every face of our vehicle is inspired by an animal-like character to create a humanistic expression. It’s not a robot.” According to Mayer, in this case, the EX90 is inspired by a lion, reflected in the vehicle’s proud stance. “We have the eyes up high and the mouth below,” he explains. “This type of physiognomy will set the expression for future vehicles.” As with many EVs, the front face of the EX90 lacks a traditional grille, but keeps the familiar shield shape and Volvo “iron mark” logo.

Mayer’s favorite design element is the new take on the “Thor’s Hammer” lighting signature. Elaborate lighting designs and animated “welcome sequences” are all the rage in current car design, and Volvo is right on trend. Upon approaching the vehicle, moving light bars in the EX90’s headlamp assembly open and close in a wink-like gesture. In the dark, the EX90 greets drivers with a hammer shape projected onto the wall in front of the car.

In a time when many marques are experimenting with EV proportions—think cab-forward, jellybean shapes—Mayer says the EX90 keeps a classic proportion, known in design as the golden ratio.

“You can see this proportion if you take a cross-section through a nautilus shell,” he says. “On this vehicle, the aim of the front pillar points toward the center of the wheel—a very classic car-design principle that plants the EX90’s stance. Along with our Scandinavian design philosophy and glass roof, the underlying principle is to create something that’s both robust and strong, but lightweight in perception, and that is something that will be applied to all future products.”

When it comes to safety, the EX90 is packed with sensors and cameras. Notably, a lidar unit supplied by Luminar—which can detect people and objects hundreds of feet ahead of the car—is a major step toward increasing safety and avoiding accidents. The lidar system is mounted front-and-center on the roof, directly above the windshield. Its high position is crucial in order to be effective, Mayer explains. And while the blister-like bump is indeed conspicuous, it’s remarkably svelte when you consider the gargantuan, siren-like lidar units harnessed to the roofs of older prototypes such as the Jaguar I-Pace and Chrysler Pacifica minivans used by Google’s Waymo.

In the EX90’s cabin, an elegant yet understated interior design inspired by Scandinavian architecture frames a large, floating portrait-style display. Thin air vents are controlled by jewellike knobs and, by night, the EX90’s wood trim is backlit with a diamond-shaped pattern. Fabrics—some of which are shared with Polestar models—aim for sustainability, including a leather alternative made with Scandinavian pine resin. All EX90 interiors will be animal free, and Rowan tells us that each car contains nearly 106 pounds of recycled plastics and bio-based materials.

Under the skin, the EX90’s core system is powered by NVIDIA Drive AI and Qualcomm’s Snapdragon Cockpit platforms. Graphics are powered by Unreal Engine, originally designed for the video game and film industries, which render real-time graphics. Google voice, as well as other apps and services, come built-in, and Volvo says wireless Apple Car Play will also be available.

Pricing is expected to start at less than $80,000 for the 2024 Volvo EX90, which will be built for the US market at the company’s plant in Ridgeville, S.C. Volvo is taking preorders now, with first deliveries expected in early 2024.