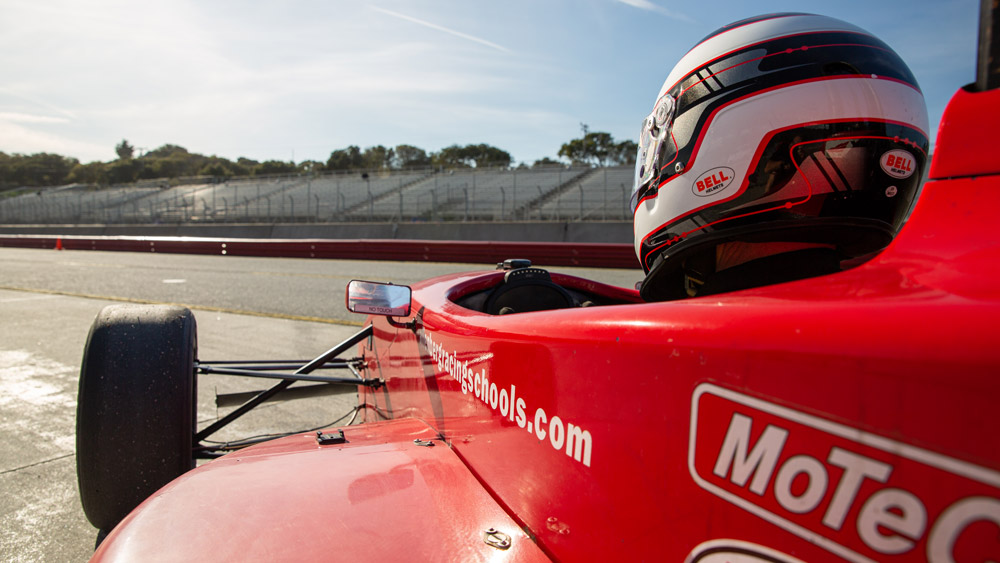 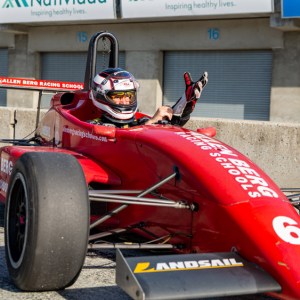 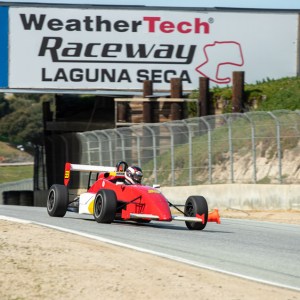 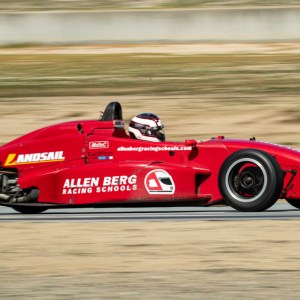 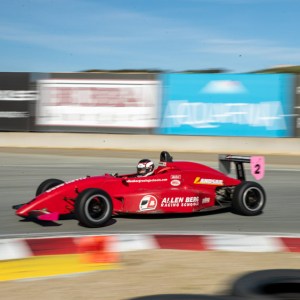 Even with bug-splats on my helmet’s visor, the Corkscrew turn at WeatherTech Raceway Laguna Seca is an awe-inspiring sight. Wiggling through the quick left-right combination means plunging the equivalent of six stories in just 450 feet of track. Nearing the bottom, I short-shift to fifth gear and apply enough throttle to keep the engine on a steady note while sweeping further down and left through the fast banking on turn nine.

The wind rushes. The sturdy 1.6-liter Renault four-cylinder goes hammer and tongs. My head wags as the wheels graze the red-and-white rumble strips at the margins. That’s life during dozens of laps around the 2.2-mile circuit in an open-cockpit, open-wheel, 1,000-pound race car made by Tatuus in Italy. At the Allen Berg Racing Schools (ABRS), getting on the course ASAP is one of the big draws.

Growing up around oval tracks in Nebraska, I dreamed of being a racing driver with patches on my sleeves and a blue stripe on the car. The dream faded after college and my start in journalism. With my first stories about cars, the dream revived, and racing school seemed right on the horizon. But it took 35 years: I’m six months from Medicare. Nevertheless, aged and decrepit, I swooned at the thought of Laguna Seca.

“It’s a legendary track,” says the raceway’s former CEO, Timothy McGrane. “Be prepared physically. And don’t fight it too hard in turn four.”

Berg has the knack for simplicity. He’s quick to gauge a driver’s ability and tailor the instruction to suit. And his human touch is unfailing.

Consider the case of Zach Jo. A sophomore at Boston College who is studying finance and philosophy. Jo saved his earnings from facilities maintenance to do the two-day program on spring break, and brought his mom, Jacquie. Zach’s two years of karting made him much faster than the rest of us in the group.

Oh, the brash confidence! On the last session of the first day, Zach overcooked turn four and crashed hard. He was OK, but Berg hadn’t seen such damage in a couple of years. “There’s no dishonor in it,” he told Jo, insisting that he return the next day. Zach and Jacquie needed a ride back to the motel that afternoon. With me at the wheel, they sat astern in the all-conquering, deep-sapphire-metallic Porsche Panamera GTS that I had cadged from Porsche’s fleet. When Zach feigned sleep, I feigned waking him with 453 hp in Sport Plus mode. Then a Danish driving companion riding shotgun imparted some Danish wisdom to the young man. ““Op på hesten igen,” she said. That is, “Back on the horse.”

The two-day program costs $4,595. Track insurance for $239 is a good idea. Mini-SD cards from the in-helmet video are another $70. With all the amenities—from a well-marshaled course to the detailed video and data review—it’s a bargain.

And none among us could withstand the Zach Attack. The guy who crashed hard yesterday cackled to himself while zooming by us in the afternoon sessions.

It must be reported that the most aggravating part of the second day was chief instructor Jeff Bucknum’s unsparing analysis of my lousy two-minute laps. He approaches after a session, notes in hand and a gleaming eye. “So, would you say you widened your line in turn three?” he questions. “Yes, I was right out there on the margin,” I reply. He whips out his phone and shows an odious photo of yours truly parading down the middle of the track. As if spitting out an olive pit from a luncheon salad, he retorts, “Maybe you want to work on that.” If that requires returning again and again to the Allen Berg Racing Schools and Laguna Seca, I hope my work is never done.