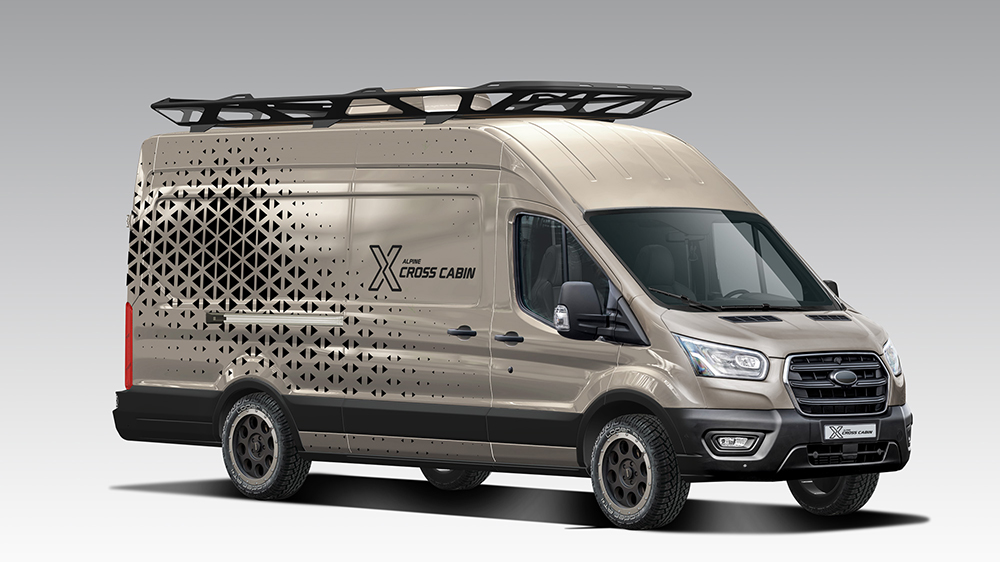 Alpine is shifting its attention from premium audio components to changing the way we work and camp.

The German company showed up at last week’s CMT camping showcase in its home country with a stunning concept called the Cross Cabin. The futuristic van features a versatile interior packed with everything you need to work and play.

The Cross Cabin’s main draw is its interior. With remote work having changed the way some of us live our lives, Alpine wanted to create a camper van that would help foster productivity no matter where an adventure takes you. The van, which was designed for two, has a pair of distinct workstations, so you and your travel buddy can work at the same time. It is, in the company’s own words, a new kind of “Workation” vehicle.

Each of the Cross Cabin’s workstations has a look inspired by Japanese minimalism, according to the company. The first space, which is located just behind the driver and passenger seats, is a combination work and dining area. It has a kitchenette integrated into its sliding passenger door that you can use to prepare meals in and out of the vehicle. The larger rear space, meanwhile, is lined with bamboo ribs that keeps shelving, lighting and an Alpine audio system out of sight. Its tatami mat floor also houses a large pop-up table that can be used for work or eating and its two integrated benches can be converted into a sleeping area at night. The van is equipped with a solar-assisted 12-kWh electrical system that can keep everything running for up to three days, as well as a 4G/LTE cellular antennae and a high-speed mobile router to meet all your communication needs.

Alpine didn’t release technical info about the vehicle itself, but we do know that the Cross Cabin is built on the bones of the Ford Transit van, though it’s unclear if it’s the standard commercial version or the new camper variant. It’s also possible it could be based on the battery-powered E-Transit, like last week’s Winnebago eRV2 concept van.

Unfortunately, it doesn’t sound like Alpine has any plan to become a vehicle manufacturer anytime soon. The company did say it plans to take the concept to other tradeshows this year and plans to use the feedback it generates to inform future RV products. Let’s just hope they eventually team up with someone else to turn the concept into a reality.