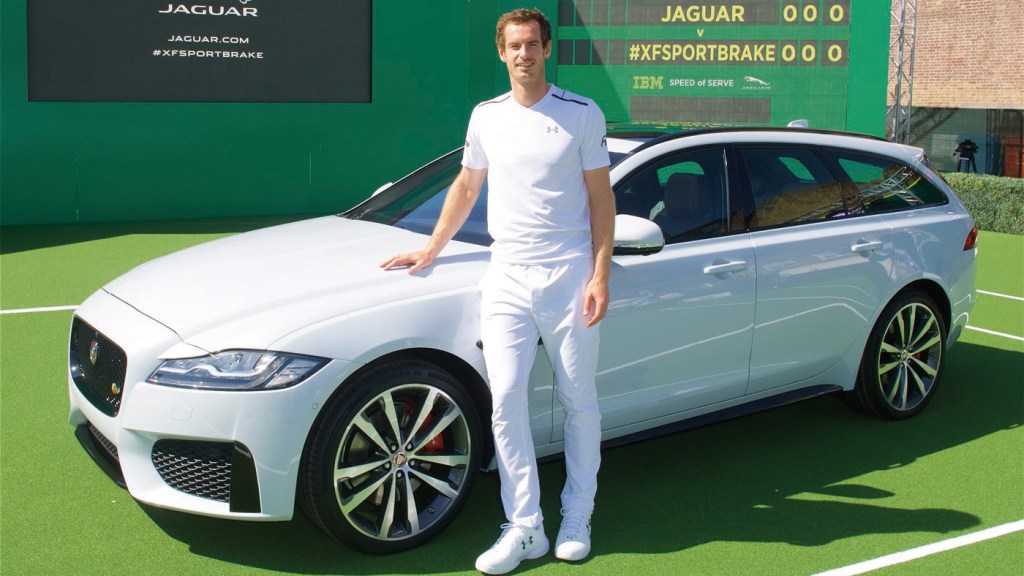 On June 14, less than three weeks before the Championships at Wimbledon, top-ranked tennis player Andy Murray helped Jaguar deliver an automotive ace—the XF Sportbrake. Murray not only unveiled the vehicle, but intentionally left one of his two men’s singles trophies in the car as it embarked on a promotional tour through the United Kingdom—one designed to inspire the next generation of professional players.

A revised version of the XF model’s estate variant, introduced in 2012, the new four-door provides plenty of room for rackets due to its 60 cubic feet of load space. Like the players prominent on center court, the all-wheel-drive vehicle is fast, agile, and packs plenty of power. Giving it automotive muscle is Jaguar Land Rover’s 380 hp, supercharged 3-liter V-6 engine paired with a ZF 8-speed automatic transmission, a combination that allows a rate of acceleration from zero to 60 mph in 5.3 seconds. The XF Sportbrake can also be configured with 4-cylinder Ingenium gas or diesel engines for reduced emissions.

A sure-footed performer with a two-ton towing capacity, the car comes with Adaptive Dynamics, which tailors handling based on terrain and the owner’s specific driving metrics, and a self-leveling rear suspension which adjusts the air springs depending on the weight of the payload. And rain delays are never a concern, thanks to the car’s All Surface Progress Control (ASPC), which adds stability in slick conditions.

The interior and exterior aesthetic is that of a sports car. The clean, aerodynamic lines, distinctive front bumper, spoiler, black side sills, and 20-inch alloy wheels are complemented inside with Taurus leather sports seats and high-tech touches. Among the latter are Driver Condition Monitoring (a fatigue alert system), Cabin Air Ionization (an air purification system), and a gesture-controlled sun blind for the expansive panoramic roof.

The view from the backseat of the XF Sportbrake.

After the reveal, the car carried Murray’s trophy to tennis clubs and schools throughout England before ending its tour at the Goodwood Festival of Speed, held from June 29 through July 2. Murray will defend his singles title at Wimbledon when the tournament, of which Jaguar is an official partner, begins today. Pricing for the XF Sportbrake starts at $70,450.