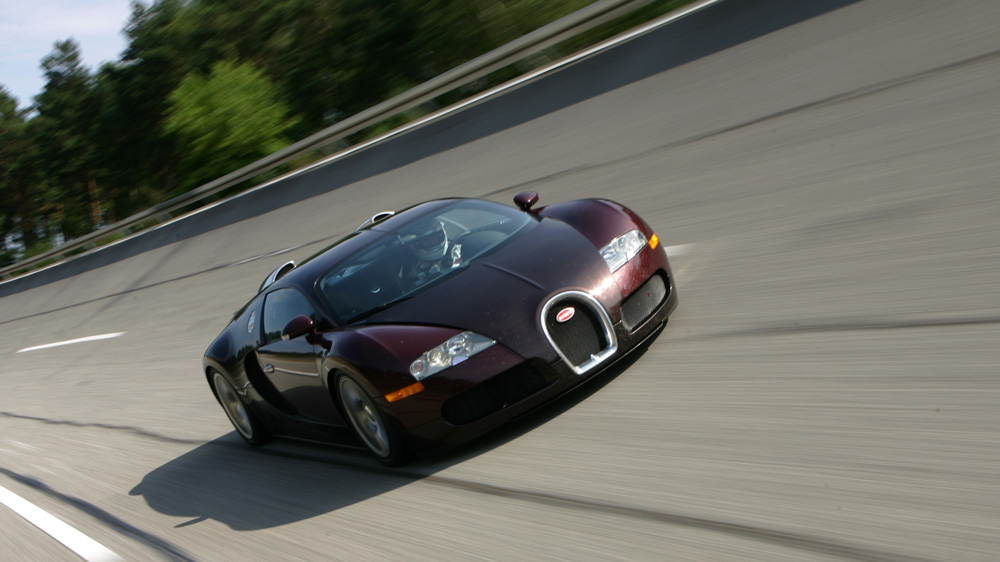 On this day 15 years ago, the 987 hp Bugatti Veyron 16.4 became the first production car to surpass 400 km/h (249 mph) with its 253.81 mph run at Volkswagen Group’s Ehra-Lessien test track. Before that certified record, Bugatti had a reputation for building some of the finest and most expensive automobiles the world has ever seen. As soon as Bugatti proved that the Veyron was the fastest car in the world, the French marque became a household name.

Members of the media compared the hypercar to the Concorde and the accomplishment to the moon landing. After test-driving one in 2015, I likened the 1,184 hp Veyron Grand Sport Vitesse’s acceleration to shoving my face into a fire hydrant’s stream, while also commenting that it’s a machine that’s designed to hit 254 mph as easily as it is for a cable company to charge you too much.

The Veyron has been a lot of things to a lot of people over the years. For me, driving that machine was nothing less than a life-changing experience. I’ll point to a line in my left palm and tell my grandchildren: “This side of the line was my life before I drove the Veyron, and this side is life after the Veyron.”

Five years later, I still get giddy when I tell people about hitting “full afterburner” behind the Veyron Grand Sport Vitesse’s wheel. Surprisingly, the Veryon didn’t feel much like a hypercar under 4,500 rpm. After 4,500 rpm, however, the Veyron felt like a land-tethered fighter jet. Truth be told, I’ve flown in a fighter jet that took me up to 5 g, and even after that, I still came away more impressed with my Veyron experience.

The car accelerates from zero to 62 mph in 2.5 seconds.  Photo: Courtesy of Bugatti Automobiles S.A.S.

Back in 2005, it was easy to think we’d never see another car surpass the Veyron’s capabilities. But then the model’s variants kept flying higher. First came the 1,184 hp Veyron Super Sport’s 267.85 mph run in June, 2010, re-cementing the Veyron’s place as the world’s fastest street-legal production vehicle. Then, in April of 2013, the Veyron Grand Sport Vitesse hit 254.04 mph, becoming the fastest street-legal roadster of that time.

Although it should be noted that the Swedish marque Koenigsegg captured the honor with its Agera RS (reaching a top speed of 277.87 mph) in 2017, its reign was recently ended by a modified version of the Veyron’s successor. On September 2, 2019, the 1,600 hp Chiron Super Sport became the first production car to break through the 300 mph barrier with a 304.77 mph top speed.

It seems that, although the Concorde and moon landings have been grounded for years, the production-car speed record continues to soar higher with, at least for the moment, Bugatti in the pilot seat.