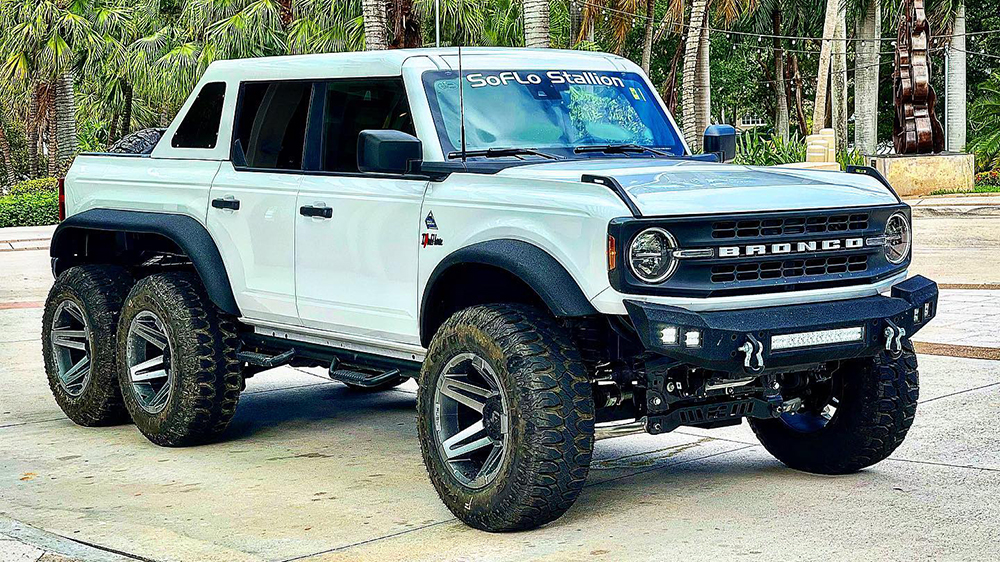 If you looked at the recently unveiled Bronco Raptor and found yourself wishing it was a little more hardcore, then Apocalypse Manufacturing has something for you.

The Florida-based builder has taken Ford’s extremely popular new Bronco, added another set of wheels, given it a lift and dubbed its over-the-top off-roader the Dark Horse.

By adding a third axle to the SUV, Apocalypse has basically transformed it into a supertruck. The off-roader now has a truck bed positioned directing behind its modified four-door cabin and its rear fenders have been extended to make room for the extra set of wheels. The suspension has also been tweaked to give the vehicle a four-inch lift. That may not sound like much, but just look at the images and you’ll see it makes a real difference. Other changes include a new bumper and light bar, giant tow hooks up front and a set of 37-inch Milestar Patagonia M/T tires, according to Motor1.com. It looks absolutely ridiculous—but what’s the point of a 6×6 if not to turn heads.

The modifications aren’t limited to the exterior. The truck is powered by a specially tuned version of the Bronco’s turbo-charged V-6. We don’t know what kind of transmission it’ll be mated to, but it will generate 400 hp. That’s about as much as the Bronco Raptor. Power will also be delivered to each wheel, according to AutoBlog. The vehicle’s also been equipped with a new exhaust system.

A price has yet to be announced, but Apocalypse previous builds start at $150,000. Considering the popularity of the new Bronco, though, we wouldn’t be surprised if the Dark Horse starts north of that. The first will be auctioned off by Barrett-Jackson next month.

Of course, the Dark Horse is far from the first modified six-wheeler we’ve seen around these parts. Post Malone has one, and over the last year we’ve seen a  6×6 version of the Mercedes-Benz G-Wagen and the X-Class truck go up for grabs. Apocalypse actually specializes in six-wheeled brusiers, including the Ram TRX-based Warlord, which costs $250,000.

Pretty soon we’ll be talking about 6x6s as much as 4x4s.