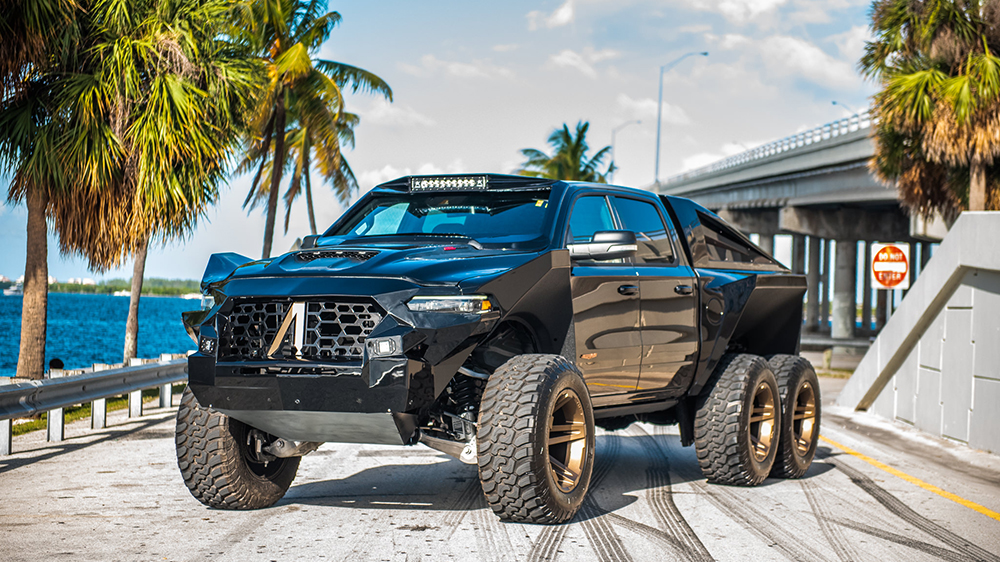 Leave Apocalypse Manufacturing alone for long enough and its bound to churn out another 6×6.

The latest vehicle to get the six-wheel treatment is the already gigantic Ram TRX. And thanks to an extra axle, some body modifications and a hardcore engine tune, the resulting Juggernaut just might be the Florida shop’s most absurd build yet.

The TRX was a monster long before Apocalypse got its hands on it, but now it’s something else. The truck’s bed has been extended to account for the new axle, which means the Juggernaut stretches an astonishing 22.7 feet bumper to bumper. That’s more than two feet longer than the largest version of Ram’s truck. The entire front fascia and bed area have also been given an angular makeover, including a weatherproof tonneau cover that runs from the top of the four-door crew cab to the tailgate. The entire vehicle has been finished in gloss black, with the exception of some gold accents. These include the shop’s giant badge on the new steel grumper (the grille and bumper are a single piece) and its 22-inch SFJ rims, which come wrapped in 40-inch tires that push the vehicle’s total height to 7.3 feet. We don’t know what the inside of the truck looks like, but it’s said to feature a Harmon Kardon audio system and a 12-inch touchscreen infotainment system.

The TRX’s 6.2-liter Hellcat V-8 has been tuned so that it now pumps out 850 horses, which is 148 more hp than before. It’s also been equipped with a six-wheel-drive system, locking differentials and a Dana 60 rear axle. Thanks to its mill and these three specific modifications, the truck can tow up to 20,000 pounds, according to Apocalypse. You’ll be able to select from five different drive modes—Sport, Drag Race, Baja, Rock and Mud—to get the most out of the vehicle too.

“This one-of-a-kind creation is essentially a compilation of our greatest builds, truly borrowing the best aspects and features previously highlighted in our 180 6x6s currently on the road. Our customers wanted an immensely powerful and ultra-luxurious super-truck and they got it with the Juggernaut,” said Joseph Ghattas, Apocalypse’s owner, said in a statement. “It is the largest of the six-wheeled Apocalypse trucks and one that checks off all the boxes—speed, size, reliability, comfort, space and way more functional features like increased towing and axle lockers.”

It’s unclear if this particular Juggernaut, which made a cameo in the Sandra Bullock and Channing Tatum action romcom The Lost City, is for sale, but Motor1.com reports that Apocalypse will at least build you something very close. Be prepared to spend, though. The Insane 6×6 reportedly starts at $297,999.

Click here to see all the photos of the Apocalypse Manufacturing Juggernaut 6×6.