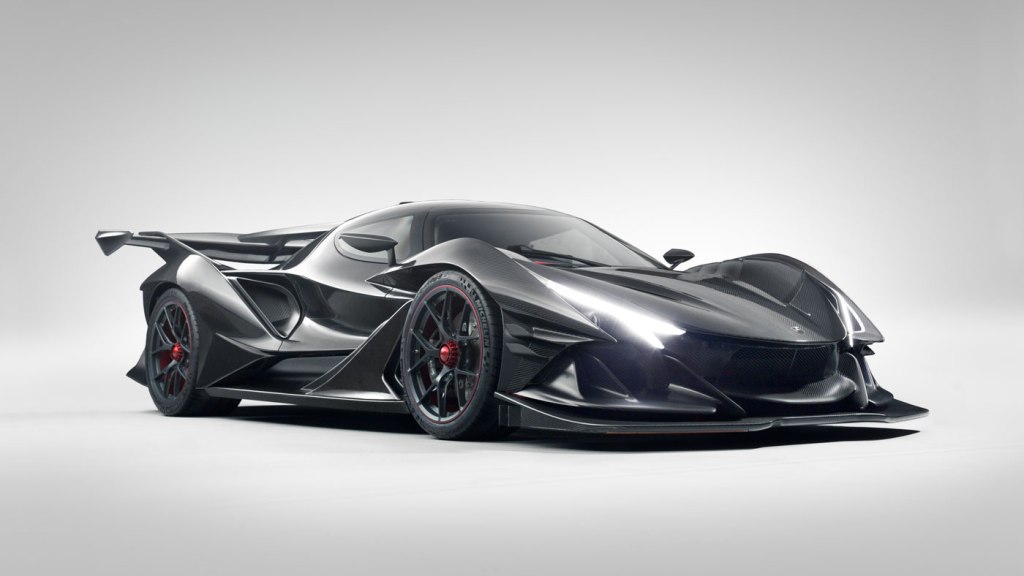 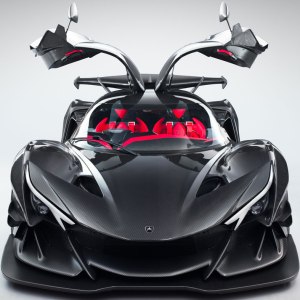 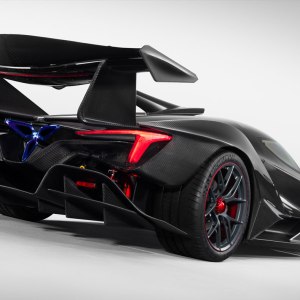 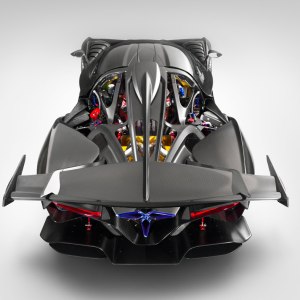 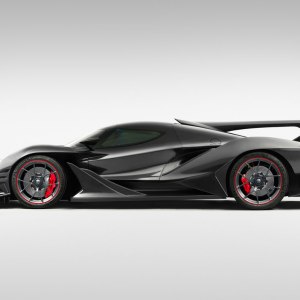 There was a time not long ago when drivers were pushed to their limits—and routinely past them—when piloting supercars. Early examples from this class were known for being untamed and raucous, fire-spitting and hellish to handle—a true driver’s automobile. In other words, one needed a high level of skill to even begin to approach the car’s capabilities. Today’s exotica, however, is more manageable and less of the fire-breathing variety of old; even though the average supercar’s horsepower has doubled.

That’s where Norman Choi and Ryan Berris come in. Their mission is to save that classic supercar formula with the all-new Apollo Intensa Emozione (IE).

Think back a handful of years and the Apollo name should rings some bells. Designed by Roland Gumpert, the Gumpert Apollo was a track weapon. The car wasn’t pretty, but it sure as hell got the job done. The company eventually went extinct and the name languished on the vine until Choi, with the help of Berris, resurrected the nameplate and decided to build an even wilder ride than the original.

The Apollo IE is an all-carbon supercar with a naturally aspirated 6.3-liter V-12 engine that generates over 800 horsepower and screams to 9,000 rpm. Its rear-wheel propulsion is coupled to a single-clutch, race-spec gearbox and features an interior that’s befit of Batman, not Bruce Wayne.

We sat down with the two men behind the machine just prior to the Geneva International Motor Show to talk about their company and how the Apollo IE could save the supercar.

How did the Apollo IE project get started?

Berris: I’ve been involved with the Apollo program since the inception of the IE, as Norman has been my friend for many years. I had been working with Scuderia Cameron Glickenhaus (SCG) when Norman and I started talking about resurrecting the Apollo nameplate. After a few back and forths, I set up a meeting with Norman at Manifuattura Automobili Torino, in Italy, to check out its facilities—and from there we really started the game plan.

Ryan Berris behind the wheel of the Apollo IE.  Photo: Courtesy Apollo Automobil.

Choi: It was never meant to be a business, however. The old Gumpert Apollo was the king of the Nürburgring for quite some time. I actually owned one. When I purchased the car, I hadn’t even tested or driven it. I was more amazed at the engineering and how such a small German manufacturer could build such an amazing machine. When the opportunity arose, I leaped at the chance to take over the company. I figured, if it worked out, it could give me the opportunity to build my dream car, which is the Apollo IE.

RB: December of 2016, we started with a blank sheet of paper. We began with the chassis and soon spiraled into every aspect of the car. The timeline was completely crazy. The teams were so amped up and dedicated to the project, putting in ludicrous hours, that it went from that blank sheet to completed design and a functional car in less than eight months. July was when we had a completed example.

We were originally shooting for the reveal at the Goodwood Festival of Speed but, over the course of the development, we made some evolutionary changes to the original plan for the better, but it caused a few delays. That said, it was worth it. Pictures just don’t do the IE’s design and quality justice. To that end, the carbon is from the same supplier as Pagani, and it’s much more impressive to see with your own eyes.

Who are some of the innovative designers on your team?

RB: There’s Joe Wong, who was previously at McLaren, and he’s in charge of interior and exterior design. Then there’s Jakub Jodlowski, who was formerly at Citroën, and he is our lead CAD designer. Whatever Joe designs up, Jakub does the surfaces and brings it to reality. And as you can see, the end result is quite striking.

Did you start with the idea of building a visually extreme exterior, or was it dictated by aerodynamic needs?

NC: It’s an ultra-futuristic design, but yet with a lot of traditional aspects; non-electric, non-hybrid, non-turbo. It’s traditional engineering in its framework. The car also resembles the older, 1990s GT1 racecars, which to me, have a lot more visual presence than today’s collection of modern supercars.

RB: When you see the car, you think that it would be strictly a striking design, and everything would follow that. However, we decided to get the designers, the engineers, and the aerodynamicists all to work together. All day and all night they’d trade notes back and forth, trying to figure what would work, what wouldn’t, and then push the envelope.

The designers worked hand-in-hand with the aerodynamicists to create something that’s not only beautiful, but functional as well. There’s a very nice flow to the entire car. We could increase the aerodynamic efficiency even more and create more downforce, either by building a bigger front splitter, or changing out the rear wing, but then it detracts from the design. It was never meant to be a numbers car, but its performance is still world class.

Where does the 6.3-liter naturally aspirated V-12 come from?

RB: Everyone has been saying that the engine is from Ferrari. It’s not. The company that supplies our engines is Autotecnica Motori, run by a friend of mine, Giovanni Delfino. This is an engine that we’ve developed solely with Autotecnica Motori. They’ve done the development, the electronics, the packaging, the performance figures, and the general drivetrain manufacturing.

NC: We started off on day one with the mentality that this car would be powered by a V-12. There’s no substitute. And it had to be the highest-revving, and loudest, V-12 engine available.

What is it about naturally aspirated engines that appeal to you more than hybrid or turbo configurations?

RB: Norman had a rather large collection of new supercars. But he sold them all. He said they all drove like Hondas.

NC: They did. They’re so efficient, so easy to drive. They’re so non-emotional. Maybe one or two have something, but there’s just no emotion left with the modern group of supercars. They all go so fast, so smooth, and so quiet that, even with aftermarket changes, they don’t deliver the thrill of the older cars.

RB: I have the same feelings. Regardless of the price point, cars nowadays are so capable, because of the advances in the transmissions and technologies found in hybrids and turbochargers, that you almost can’t extract thrills on the road without being reckless.

It takes a true enthusiast to really get why we’re doing a raw supercar. It’s livelier, there’s more soul to it. What we wanted to achieve with this is a car that, no matter what speed you’re going (whether on the road or the track), it puts a smile on your face. It evokes all the senses. It’s the speed, the looks, the feel, the drivability, the connection with you and, especially, the sound it makes.

We could’ve implemented turbochargers or hybrid systems but, in the end, it comes down to two things. First, the law of diminishing returns. There’s only so much power that can be transmitted to the tires—and I mean usable power. And two, it can detract from the sound, which dilutes the emotional response generated.

As the world moves toward increased automation and electrification, we wanted something different. We didn’t want to be McLaren, Porsche, Ferrari, or anyone else. Not to say what they do is wrong or bad. The products those manufacturers are coming out with are great machines. We just wanted to build something unique to us and unique to the field.

Have all examples of the $2.7 million IE been sold?

RB: To give a long answer in a short sentence, yes. But before we start delivering to customers and really start accepting a customer’s money, we want to be 100-percent happy with the car’s development, which is continuing to this day. People constantly ask us about the timeline, but we don’t have a crystal ball. Again, this goes back to our stated ethos, this is not meant to be a business. We just want to do things right. We want to take pride in the car when handing the keys over.

NC: There’s a reason we use race-spec parts throughout the IE. We want this car to be durable. When we pick the gearbox, the axle hubs, the engine pieces, we want something that can endure the extreme driving behavior that this car is designed to accomplish. This isn’t a one lap monster. It’s a run-the- ‘Ring-until-you’re-out-of-fuel Goliath. It’s about pride in the finished result.

What personal statement does the Apollo IE make for you?

NC:  I think a raw sports car will be the last car for mankind. When the world goes quiet, this will be the last car you’ll remember. Look, I’m also a forward thinker, I’m well-aware of the future generations of electric and hybrid cars, which will come along with increased autonomy. But for now, I can still make my own destiny by driving my favorite car rather than have some computer take over that input. The IE is a manifestation of my free will. I control my fate.