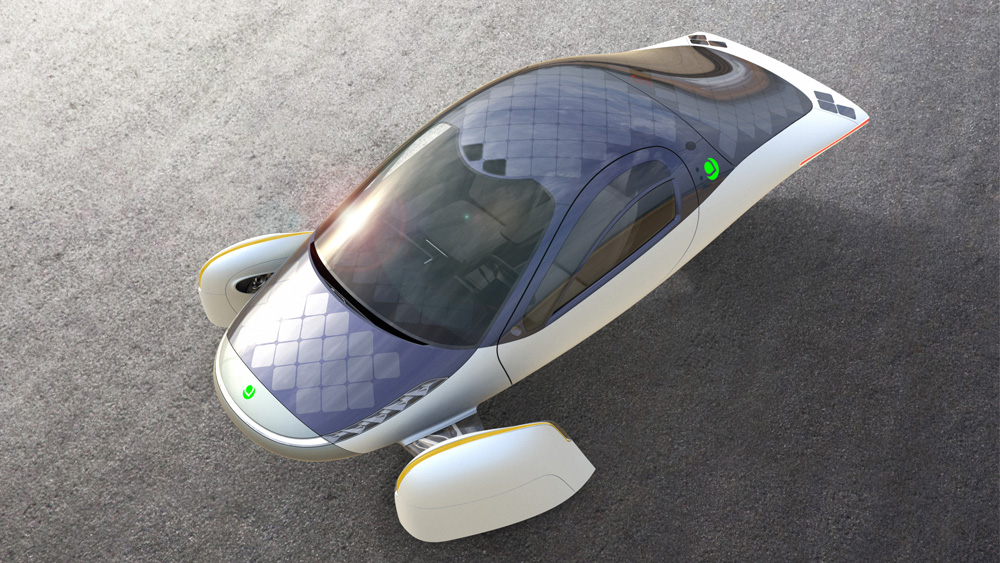 California’s Aptera Motors has released details of what they are calling the first prototype automobile that will never require charging. Aptera’s “Never Charge” system uses solar panels integrated into the car’s body that supply a claimed 40 miles of driving per day and up to 11,000 miles per year with no impact on performance.

“The average driver in the US drives 29 miles per day, so now for most American consumers, the Aptera is a vehicle you never have to plug in to the wall to receive any charge,” says Chris Anthony, Aptera’s co-CEO. “If you put our same solar package on a Prius, you could get maybe six or eight miles of charge range a day, which some people might find compelling, if you have a really short commute. For most people, it wouldn’t be worth the expense of the solar. But when you only burn 100 watt-hours per mile, like the Aptera does, the same solar package can get you 40+ miles a day of range.”

Those 40 miles of essentially free range are collected by over three square meters of solar panels, designed to be easily upgradable and replaceable over the car’s life. That complements the version capable of 1,000 miles from a single charge obtained via a 110-volt outlet, commonly found in every American household. “Our vehicle is unique in that most electric cars you can never really charge off a 110-volt outlet,” says Anthony. “It’s not enough power to charge a Tesla or Chevy Bolt. But with our vehicle, the same outlet that you use to charge your cell phone can charge 130 miles of range per hour.”

A 110-volt socket can charge the Aptera at a rate of 130 miles of range per hour.  Photo: Courtesy of Aptera Motors.

The three-wheel Aptera uses individual wheel-mounted electric motors to propel a chassis with only 10 key structural components, with the base model a claimed 1,800 pounds (the 1,000- mile edition is 2,200 pounds).

The Aptera is still in the prototype stage. Notes Anthony: “We’re hoping by the end of the first quarter of next year we’ll have those [prototypes] driving, and we’re hoping to start regular production by the end of 2020.”