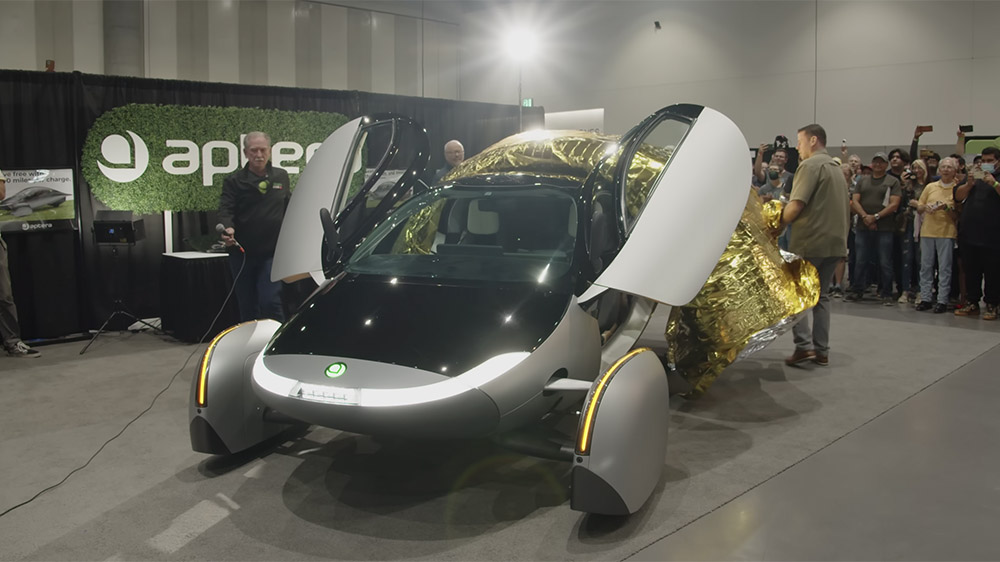 Aptera Motors is taking the time to make sure it gets its first solar electric vehicle (sEV) just right.

The California-based startup publicly debuted the gamma prototype of its zero-emission three-wheeler over the weekend in San Diego. The big unveiling of the futuristic-looking cruiser suggests the brand really is on track to put the vehicle into production next year.

The gamma prototype is the third iteration we’ve seen of the Aptera’s sEV since it was first announced in 2019. The next year, the company unveiled the alpha prototype, which it showed off with black (Noir), white (Sol) and silver (Luna) exteriors. Then, earlier this year, it started testing out the beta version, which beat the Tesla Model 3 and Audi R8 GT Spyder in a drag race.

The gamma prototype doesn’t look radically different from the version we saw back in 2020, just a lot more refined. The three-wheeler—two up front, one in the back—still has a striking teardrop shape meant to make it as aerodynamic as possible. It has a new lighting package, which includes a single strip headlamp that runs along the edge of the nose, amber lights over the front wheel covers and illuminated Aptera badging that you can knock on to open the vehicle’s doors and trunk. Just as before, the roof and trunk are topped with solar cells.

The vehicle has a clean and minimal cabin that’s just as forward-thinking as its exterior. The driver’s cockpit is equipped with a two-screen digital display and a yoke-style steering wheel, while a large touchscreen infotainment system is positioned in the center of the dashboard. The interior only has two seats, but the elongated trunk area looks like it has plenty of room for cargo.

The public unveiling appears to have been focused more on the sEV’s looks than its technical capabilities. Luckily, those remain mighty impressive. Its solar-electric powertrain, which includes a 100-kWh battery pack and the previously mentioned solar panels, should allow the vehicle to travel 1,000 miles on a single charge. You’ll also be able to drive about 40 miles a day powered solely by the sun, which would equal about 14,600 miles per year.

Up next for Aperta is the delta prototype, which will basically be the production version of the vehicle, according to Electrek. The company remains on pace to put the vehicle, which can currently be reserved for $100 down, into production next year.  The company says it already has 32,000 reservations for the sEV, which still does not have a price.