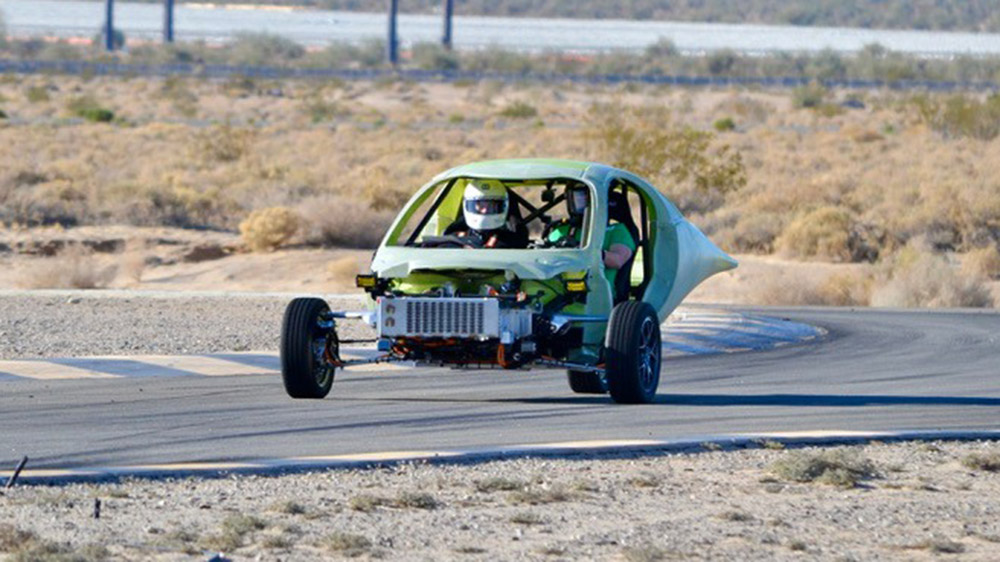 Aptera’s Paradigm may still be a work in progress but it’s already looking like something to get excited about.

The San Diego-based startup shared a new video of its futuristic three-wheeler on YouTube earlier this week. While we’re eager for any glimpse we can get of the unique coupé, the clip showed off something we weren’t expecting: The ability to beat a Tesla Model 3 and Audi R8 GT Spyder in a drag race.

The video kicks off with vehicle integration engineer Daniel Morris announcing that critical dynamic testing of the company’s SEV is just about complete. With the hard stuff out of the way, the brand decided to have some fun with one of its all-wheel-drive test mules (referred to in the clip as Beta). And what better way to do that, and also see how far the vehicle has come since its 2020 debut, than by pitting it against the Model 3, R8 GT Spyder and one of the company’s front-wheel-drive Alpha prototypes.

It’s the lime green Beta that’s able to cover the quarter mile quickest, getting to the finish line in just 3.5 seconds just ahead the purely gas-powered R8 GT Spyder. While it was neck and neck with Audi’s sports car, it beat Tesla’s entry-level EV with ease. In fact, the test mule didn’t just beat the Model 3, so did the Alpha.

As impressive as the test mule’s performance may be, it’s far from the only reason we’re looking forward to the Paradigm. The three-wheeler may only be able to fit two people, but it’s powered by a solar-electric powertrain—hence, it being called an SEV—that includes a 100-kWh battery and integrated solar panels. Thanks to this setup, the vehicle can travel a stunning 1,000 miles on a single charge, or about twice as far as the current industry leader, the Lucid Air. It’s also be able to drive about 45 miles a day on purely solar power, which works out to 11,000 miles a year.

The Paradigm is currently in the second stage of development—near-production testing comes next—but you can reserve the vehicle, which will start at $25,990, now through the company’s website. And whenever it does arrive, you’ll at least know it can hold its own in a race.