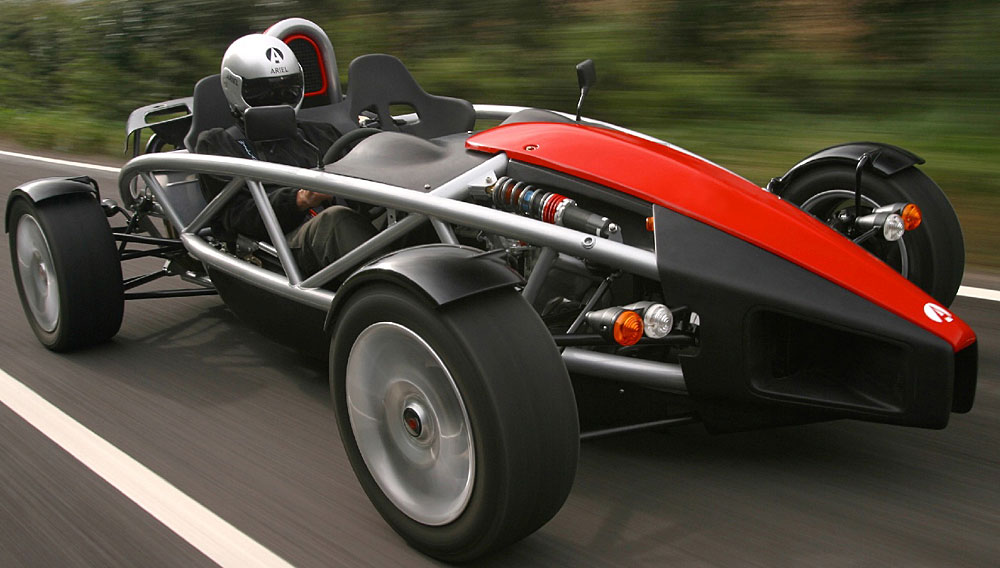 The Ariel Atom 3 is not for faint of heart. Essentially a no-holds-barred performance machine, this road-going rocket ship gives the Bugatti Veyron a run for its money off the line. Although it accelerates like a super car, its engine comes from your average commuter car. A Honda Civic four-cylinder engine develops up to 300 hp (with a little help from a supercharger) and will spin as fast as 8,200 rpm. As its name implies, the Atom reduces the sports car to its bare essentials. Its body comprises little more than a nose cone and wind deflector, leaving the structure and chassis visible for all to see. The frame comprises a large-diameter powder-coated tube trellis that mounts the tweaked Honda engine with formula-car-type suspension components. Weighing in at just under 1,400 pounds, the skeletal Atom handles more like a formula race car than a street-legal sports car. A true embodiment of the four-wheel motorcycle, the Atom offers a wind-in-the-face (as well as wind-in-the-chest, and wind-up-the-pant-legs) motoring experience unlike any other. And for those adrenaline junkies who still crave more, Ariel recently announced a 500 hp version due out in April 2010 with a small-block V-8 engine. Pros: Face-flattening acceleration. Cons: How do you not feel at least slightly ridiculous driving this?