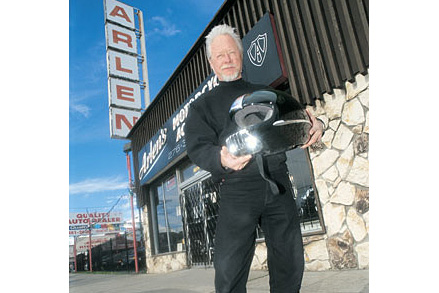 Industry icon Arlen Ness, a master bike builder and pioneer of the custom- motorcycle industry, will share stories from his celebrated career on March 7 at the 20th Annual Motorcycle Hall of Fame Museum fund-raising event, to be held during Daytona Bike Week. Proceeds from the event, which is open to the public for $49 a ticket, will support the preservation and education initiatives of the nonprofit Motorcycle Hall of Fame Museum. The museum includes award-winning exhibits and the country’s sole hall of fame honoring America’s motorcycling legends.

A 1992 inductee into the Motorcycle Hall of Fame, Ness launched his career in the late 1960s with the customization of a 1947 Harley Knucklehead. He entered the bike in a local motorcycle show and won, drawing the attention of the press?and future customers. Ness’ unique vision resulted in some of the most influential custom bikes of the past decades. His designs have been studied?and copied?by everyone from other bike builders to factory engineers. Two of his most memorable creations, built in the 1990s, are the 1957 Chevy bike, formally known as the “Ness-talgia,” which perfectly recalls the classic car, and the “Smooth-Ness,” a flowing design inspired by a bronze of a Bugatti automobile. (www.motorcyclemuseum.org)