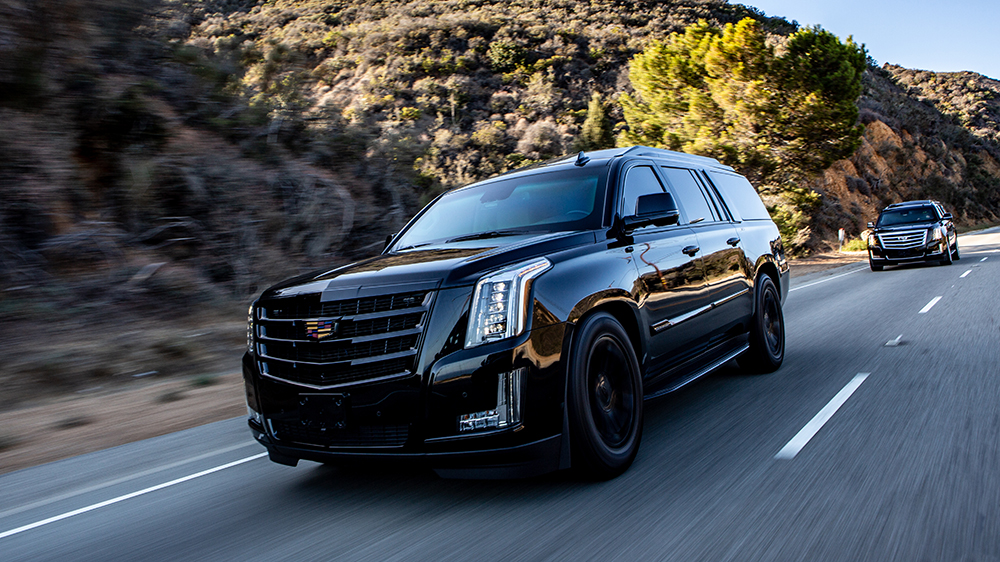 Up-armoring is a pricey business, but those companies that transform everyday vehicles into antiballistic tanks often point out that it’s hard to put a price on feeling safe. The cost for a Cadillac Escalade that can survive Armageddon? $350,000.

This badass Caddie features hidden gun ports, ballistic glass, electrified door handles, smoke-screen systems, and a plethora of other hidden tricks and gadgets that’ll thwart any attackers. It also has a luxury interior that’ll rival a private jet’s, so you can relax in comfort while the world burns around you. It’s transformed from a stock Escalade to something that would make CIA operatives jealous by AddArmor, a Wyoming-based upfitter.

While it may look completely stock, the Executive Protection Escalade is anything but. European B6-level armor replaces the glass, capable of withstanding machine gun fire and other semiautomatic rounds, up to .44 Magnum slugs. It’ll also shrug off “attacks from blunt objects like bats and cinder blocks,” in case those are concerning threats. Inside the doors, conventional steel plates have been eschewed to make way for antiballistic carbon composite panels. They’re 10 times stronger and 60 times lighter than the steel standbys. That’s a crucial swap, since armored vehicles are typically slow, leaving the machine in the crosshairs longer.

So you’re protected if someone’s coming at you, but what about if you want go on the offensive? There’s no shortage of counterattack-measure options offered. How about a sound cannon that sends out high-pitched waves to disorient the bad guys? Or electrified door handles that’ll zap anyone who grabs them into next week? They’re still coming? Activate the pepper spray system, which’ll fire the fiery stuff in large clouds around the vehicle. Lastly, hidden gun ports mean you can fire actual weapons at your foes.

When you’re making your escape, barricade-busting bumpers help clear your path while a smoke-screen system can shroud you. A 360-degree night vision system will give you all the visibility, and a mine-and-explosive-device detection system ensures your route is safe. You can opt for (highly illegal) hidden police lights, too, and an antijamming satellite setup to help call in reinforcements.

Want one of your own? Order now, since each unit takes more than a thousand hours to complete and the wait list is longer than half a year. See more photos of the Escalade below: