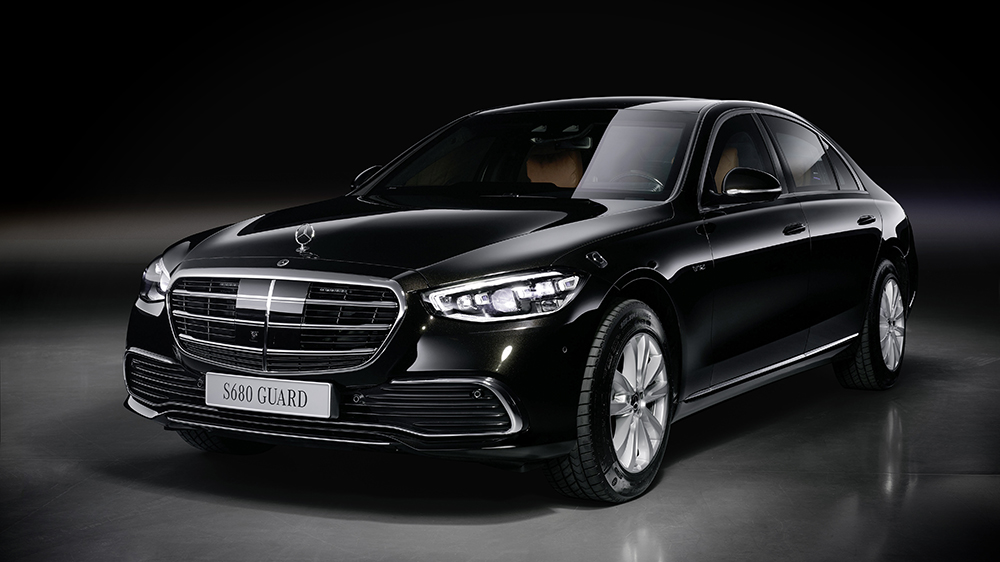 Everything about the new armored Mercedes-Benz S-Class is stealthy—including its debut, it turns out. The German marque quietly unveiled the new S680 Guard last week for “heads of state and business leaders” wishing to travel both decadently and discreetly, even in the line of explosions or gunshots.

Based on the new S-Class, the impenetrable four-wheeled fortress reportedly weighs almost 5 tons and comes with VPAM VR10 certification. This is the highest level of ballistic protection available for a passenger car, which means the stately saloon can withstand a barrage of bullets fired from an assault rifle or the detonation of two hand grenades.

The armored Benz has been updated with new protective bodywork and sturdy, multi-layered polycarbonate glass windows that measure nearly 4 inches thick. It rides on specially made Michelin PAX run-flat tires that keep on rolling along for roughly 19 miles even after they’ve suffered a puncture. It’s also equipped with an onboard fire extinguishing system and an emergency fresh air system in case of any fire, smoke or gas attacks.

“No other series-produced saloon fulfills the highest protection class for civilian vehicles quite as comprehensively,” Dirk Fetzer, head of product management S-Class, said in a statement. “And at the same time quality and durability are at series standard, thanks to extensive development and testing activities. The new special protection version protects what matters.'”

As for power, the bullet-proof Guard packs a twin-turbocharged 6.0-liter V-12 under the hood that is capable of producing 604 horses, just like the Maybach S680. The torque, however, has dropped down from 664 ft lbs to 612 ft lbs. Due to the heft of this hulking ride—it tips the scales at an imposing 9,259 pounds—the speed has been capped at 118 mph. The nine-speed automatic gearbox, steering and suspension have also been tuned to deal with the added weight. This gives the black beast the speed and handling needed to escape any sticky situations.

During tests, the new S-Class Guard held up to fire from an assault rifle using armor-piercing ammunition.  Mercedes-Benz

The automaker claims the interior is as equally as luxurious as the unarmored S-Class, though the Guard does not sport the sliding sunroof for obvious reasons. You can expect diamond-quilted leather seats, the latest infotainment system and legroom aplenty.

Available in European markets, the S680 Guard will set you back around $650,000 (€547,000) and is roughly six times the price of the regular S-Class. Hey, nobody said this level of protection would come cheap.