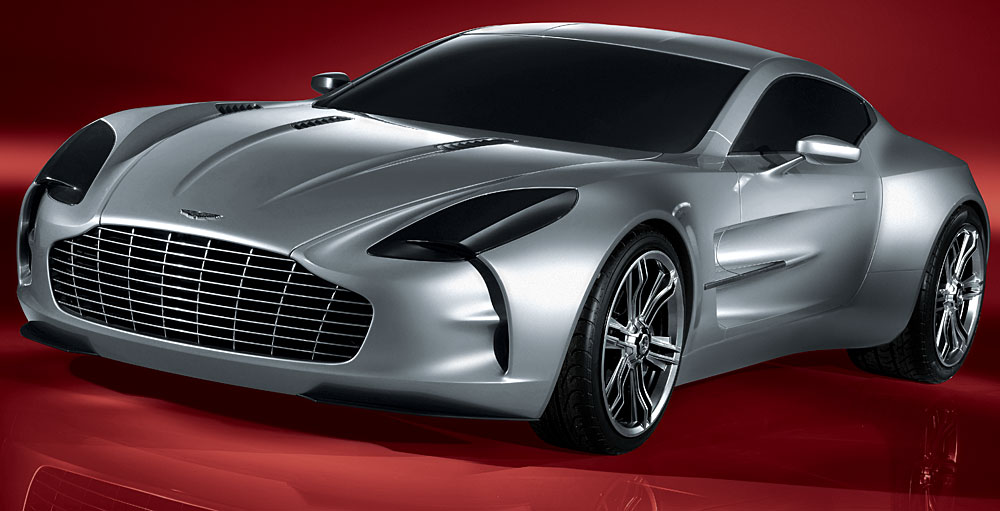 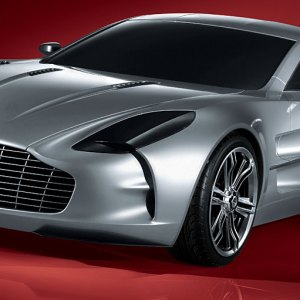 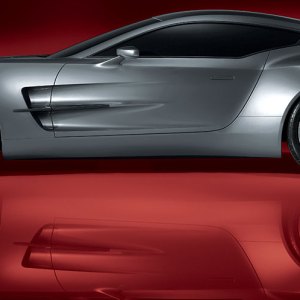 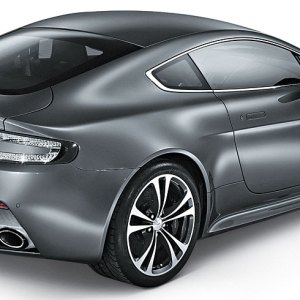 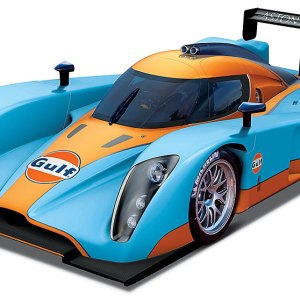 Aston Martin, ever a boutique builder of rapture-inducing sports cars and never a mass-producer of automotive appliances, is being flailed by England’s worst economic downturn since the Great Slump of 1919. Since 2007, when the company manufactured more than 7,000 cars in a record sales year, Aston Martin’s numbers have been dropping. The official projections now call for a combined total of only 5,000 DBs, Vantages, and Volantes to depart the factory in Gaydon, Warwickshire, this year.

Logic dictates that it is high time for Aston Martin to exercise caution and hunker down, that it should fall in step behind its equally ailing auto-industry companions and postpone new models, withdraw from car shows, cut budgets to the bone, gut inventories, and dump factory-funded frills such as motorsports. But Aston Martin is having none of that. The company did apply some temporary business tourniquets—going to a Monday-through-Wednesday workweek and reducing its staff from 1,800 to 1,200—but now its directors are damning the economic torpedoes and moving full speed ahead. “This is the time to go forward, not back,” said Ulrich Bez, Aston Martin’s CEO, during a conversation I had with him in January about the company’s present products and its seemingly risky future programs.

Bez, who has led Aston Martin since 2000 and brought the 96-year-old company slightly into the black prior to the financial downturn, survived Ford’s $925 million sale of the marque in 2007 to a syndicate of British businessmen and Kuwaiti investment groups. Reuters recently reported that one of Aston Martin’s Kuwaiti partners was trying to sell off 20 percent of his investment; but Bez said Reuters got the story wrong, that the partner was just looking to raise more capital to fund future projects. “We have honest, authentic, historic products that will have a place in the future world,” he said. “So we are pushing with all power forward.”

Aston Martin demonstrated its forward push at March’s Geneva International Motor Show with rotating displays of new models and concept cars. The latter included a prototype from Aston Martin’s sister brand Lagonda, dubbed the Lagonda ALV. (ALV, or “avant-garde luxury vehicle,” is a euphemism for SUV, a term that apparently sounds too populist and better suited to a construction site than to polo grounds.) Also shown in Geneva was the DBS Volante convertible, which will go on sale this fall.

But perhaps the boldest display of mettle by Aston Martin—a company that has survived one Depression, two World Wars, many periods of underfunding, and frequent ownership changes—was the One-77, a car so named, according to rumor, because someone at Aston Martin reasoned that if one seven is lucky, two should be even luckier. (Aston Martin’s affiliation with one 007 has certainly proved beneficial, at least for branding purposes.) The $2 million One-77 will overtake the $1.5 million Bugatti Veyron as the world’s most expensive production car and, if fortune favors Aston Martin, will therefore be irresistible to a financially manic fringe.

In rationalizing aston martin’s business plan, Bez said the current crop of cars—including the DBS Volante, the V12 Vantage, and the four-door Rapide, which the company expects to unveil this fall—have all been included in the budgets through 2010. He also pointed to the widely held theory in the luxury-goods market that sales of the most expensive items are recession-proof. He has total confidence in Aston Martin’s products, believing that such meticulously made nonessentials “have a right to be around,” he said. “An Aston Martin is a handcrafted, high-tech system, and this [marketing approach] is absolutely right for an exclusive product such as ours.”

It is right, according to Bez, even for a product as exclusive as the One-77. Aston Martin recently started taking customer deposits and expects to build a total of 77 examples of the model. “The One-77 is Aston Martin after 10 years of refining the brand,” said Bez. “It demonstrates our knowledge, our handcraftsmanship, our engineering skills. It is an extreme car, but there will be no other like it.”

The One-77’s 7.3-liter V-12 is expected to deliver at least 700 hp and a top speed far north of 200 mph. These specs are not so outrageous when compared to those of some supercars that have preceded it: the Ferrari Enzo, the Mercedes-Benz SLR McLaren, the Porsche Carrera GT. But, as Bez indicated, the One-77 looks like no other car. It sits a prodigious 6 feet wide and weighs only 3,300 pounds. Its 20-inch wheels are pushed deep into the tightest of overhangs, and its body abounds with flukes, strakes, scoops, and diffusers. That fuselage comprises just five aluminum panels, each cut, molded, and polished entirely by hand before being formed over a carbon-fiber monocoque with a gentle hourglass waist.

Ian Minards, Aston Martin’s product-development director, said the company had already received “tens of orders” for the One-77. When asked whether there are 77 people who will buy one, he succinctly answered, “Yes, there are.”

While the one-77 is intended for only a very few people, the Lagonda ALV could expand the market for Aston Martin, just as the Cayenne did for Porsche. But the ALV is not an SUV, insisted Bez. “It is not a utility vehicle at all,” he said. “It will have a ground clearance of 300 millimeters [12 inches], or enough to clear rocky roads in Australia or mid-America—but with space, with luxury.”

The Lagonda company was established in 1899. First, the marque made big touring cars favored by Czar Nicholas II. Then came the luxurious Lagonda Sedanca de Villes, which were powered by a V-12 designed by W.O. Bentley. Following Aston Martin’s purchase of the brand, in 1947, Lagonda produced the Italian-styled Rapide of the 1960s and then an oddly wedge-shaped four-door in 1976, which did not sell well and led to the company’s eventual shuttering.

The British company has brought back the Lagonda name as it tries to enter new markets where neither highways nor cultures favor sports cars. The ALV will also flesh out a lineup that has been criticized quietly for producing too many DB9 clones. The Lagonda concept car is a big, heavy, tall four-door with four-wheel drive; it conveys the message that if the Russian roads between Yakutsk and Sakha might rip the underpinnings from your low-slung DBS, then you should drive your high-slung Lagonda instead.

The DBS, of course, is the $280,000 Aston Martin flagship that James Bond sadistically and literally beat the doors off of in Quantum of Solace. As surely as September follows August, convertibles come after coupes, and so now the DBS Volante is following the DBS coupe. When you measure the car by its mechanicals (a V-12 delivering 510 hp), performance (zero to 60 mph in 4.3 seconds with a top speed of 191 mph), and beauty (Aston Martin’s chief designer, Marek Reichmann, considers “gorgeous” an understatement), the DBS convertible is the same as the coupe.

Shortly before the car was to be introduced in Geneva, Aston Martin allowed me to take the first passenger test-ride of the Volante, with Minards at the wheel. The ride around Gaydon and across Warwickshire, on motorways and country lanes, showed that the DBS has gained nothing nasty from its conversion to a convertible: no cowl shake, body flex, or wind noise. The three-layer fabric top—which can be raised or lowered in 14 seconds and can be operated when the car is traveling as fast as 30 mph—has sufficient insulation to reduce motorway din to a growl.

The Volante’s ride is a little stiffer than the coupe’s (the designers removed the rubber bushings cushioning the rear subframe as part of Aston Martin’s crusade for rigidity), creating a vague sense that metal is rubbing against metal back there. But this is a minor distraction when considered with the car’s surging and seamless power from a new optional paddle-shifted 6-speed automatic transmission. “It is for those people who enjoy driving in the open air, but in a most refined way,” Bez said. “It is more understated than the [coupe], but a convertible, with a big presence on the road.”

Bez’s plans for Aston Martin include a bigger presence in motorsports—at a time when other carmakers are pulling out. Mitsubishi was hors de combat for the last Dakar rally, and Subaru and Suzuki have walked away from the World Rally Championships. But Aston Martin is building a pair of challengers to Audi’s R10 TDI and Peugeot’s 908s for the LMP1 manufacturers’ prototype class at this year’s Le Mans. For the past two years, Aston Martin has won the less prestigious category for GT1 cars, and it is now aiming for victory in the senior category that it last won in 1959. The Aston Martin challenger will be based on a Lola and powered by the same V-12 found in the DB9. It will wear the powder-blue-and-orange livery of Gulf Oil.

Aston Martin is also hoping to catch up to its road competition with a four-door sports car. Bentley has the Continental Flying Spur; Maserati offers the Quattroporte; Lamborghini has unveiled the Estoque; and this year Porsche will deliver the Panamera. Now, Aston Martin plans to introduce the Rapide, which is built on the same platform and equipped with the same engine as the DB9, and should cost about $275,000. The car’s silhouette, even with four doors, is rakish and magnificent. “It will bring between 2,000 and 3,000 units to the table,” Bez said. “It will bring for the Aston Martin aficionado a car that will go from New York to Los Angeles, with four people, with luggage, and then go back. It will be an Aston Martin for a young family, an Aston Martin for taking two friends out to dinner.”

Bez acknowledged that hauling Aston Martin into the future will be tough. Yet he is considering no option other than higher profitability rooted in a product lineup shorn of a dependency on “sports cars and Europe and the United States.” Aston Martins are currently sold in 33 countries. Bez sees the company increasing that presence to “every country in the world” by widening its product range and rendering itself impervious to “the volatility we are facing today.”

It is a daunting mission, one that requires determination and enough daring to risk disaster. But then, the telephone number of Bez’s direct office line does end in “007.”

To read about Aston Martin’s return to Le Mans in June, visit www.robbreport.com/astonmartin.