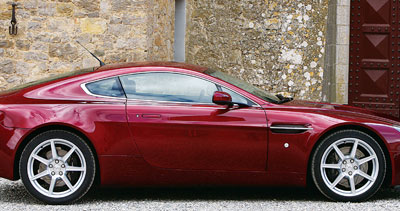 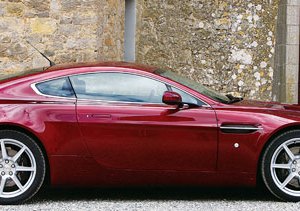 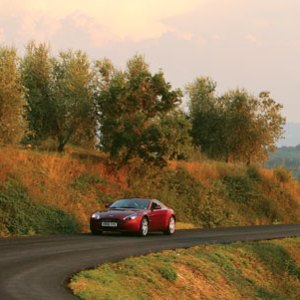 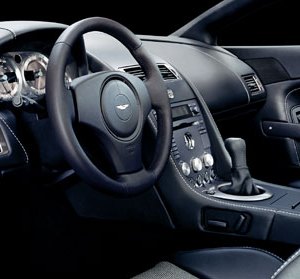 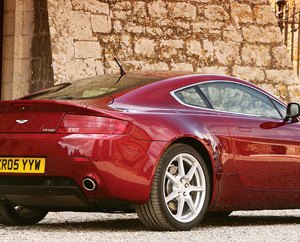 A driver judges a car, says Aston Martin chief program engineer David King, largely by how well it steers. King, then, will understand a preference for the new V8 Vantage over the DB9, even if the Vantage is, in essence, a smaller, less powerful, and considerably less expensive ($110,000 versus $157,000) version of the DB9. “The steering wheel is the only control with which the driver is in constant contact,” continues King, “so we put a great deal of effort into getting it right.”

Right they have got it. The newborn Aston recently posted an 8:10 lap of the Nürburgring, a venue record for Aston Martin. According to our charts, that is six seconds quicker than the DB9 and seven seconds better than the Vanquish—both V-12-powered cars—around the benchmark German road course. The V8 Vantage’s relatively compact-displacement V-8 engine sits just aft of the front axle, and low. As with a racecar, the Vantage engine’s dry-sump oil system not only ensures engine lubrication under high acceleration, braking, and cornering, but it also eliminates the need for an oil pan. That, in turn, enables the engine to nestle deep within the chassis, which reduces the center of gravity and makes it easier to turn a corner, or to turn all 173 corners at the Nürburgring.

To showcase its latest achievement, Aston Martin, instead of simply underwriting another James Bond film, handed us the keys to the V8 Vantage, loaded us with maps, and dispatched us to explore Tuscany’s idyllic landscape. The region’s vineyards and rolling hills, dotted with cypress and olive trees, are a picturesque patchwork laced with the narrow, winding roads on which we could reach verdicts on the car’s steering and other traits.

To showcase its latest achievement, Aston Martin, instead of simply underwriting another James Bond film, handed us the keys to the V8 Vantage, loaded us with maps, and dispatched us to explore Tuscany’s idyllic landscape. The region’s vineyards and rolling hills, dotted with cypress and olive trees, are a picturesque patchwork laced with the narrow, winding roads on which we could reach verdicts on the car’s steering and other traits.

Flip the hidden panel of a door handle, and the window lowers a fraction of an inch. The lightweight aluminum door then unfolds like a swan’s wing, opening on a six-degree upward angle to avoid scraping city curbs. It is a thoughtful touch that creates a good initial impression.

Like the DB9, the V8 Vantage features an aluminum frame that rides on front and rear double-wishbone suspensions. Widths of 61.7 inches in the front and 61.5 inches at the rear—the same measurements as on the DB9—separate the wheels. The interior, too, is nearly identical to the DB9’s, with hand-stitched leather seats on either side of the car’s wide central tunnel. The decor includes aluminum accents and optional wood trim in a choice of walnut, mahogany, or bamboo. A piano-black wood trim also is available. Alcantara covers the headliner, and a hidden panel in the center of the dashboard flips up to reveal a navigation screen—a nod, perhaps, to the James Bond–Aston Martin relationship. The Vantage sheds the vestigial rear seats in favor of a parcel shelf, and in the process provides ample headroom and legroom to comfortably carry 6-footers. Access to the luggage compartment is through a hatch, as it was with the DB2/4 from the 1950s.

The Vantage’s exterior distinguishes itself through the details. Its front grille actually is larger than the DB9’s, which makes the rest of the car appear more compact by comparison. The Vantage also is more than a foot shorter and rides more than 2 inches closer to the ground than the DB9. On each side, the signature chrome-barred vents of the front fenders highlight the prominent ridgeline that eventually submerges into the rear fenders. The taillights are the same as the DB9’s, but the Vantage’s twin integrated exhaust ports produce a tidier appearance.

Once seated inside, Aston aficionados immediately will recognize their surroundings, and the glow. Turn the key of the V8 Vantage, and the glass starter button on the center of the dashboard shines red as if to proclaim, with the requisite British decorum, “You may now proceed.” Press that button, lift your left foot from the clutch, and brace yourself for the sound and the fury.

The V-8 engine’s percussion reaches a crescendo at 4,000 rpm, when a bypass valve in the muffler opens wide, creating a more direct path of airflow. The effect may not be as dramatic as experiencing jet propulsion, but it is entertaining to listen to the exhaust noise as it is amplified. Even inside the cabin, with the windows closed, you know instantly—without looking at the dash—when the counterclockwise rotating tachometer needle hits 4,000 rpm.

From zero to 60 mph takes 4.8 seconds, and top speed is reportedly 175 mph. A .34 drag coefficient creates lift, however, and at speeds of 120 mph and faster, the Vantage’s light steering communicates more than one really needs to know about the road surface.

On one undulating stretch of straight line, we kept the gas pedal buried in the carpet long enough to lift the speedometer needle to horizontal, bringing it to that level with just two gear shifts. Under full throttle, first and second gear come and go quickly, but third gear, thanks to a higher 7,600 rpm governed limit, can take the Vantage all the way to 100 mph.

Toggling back and forth between two gears is not an unpleasant way to spend an afternoon. The slick 6-speed manual will be the sole transmission for the first year of production, but a paddle-shifting automatic also will be available before new customers ever notice its absence. The automatic gearbox will arrive late next year, and the waiting list for a new Vantage already stretches well into 2007.

Giant ventilated and grooved disc brakes with four-piston calipers tame speeds in a hurry. The brake pedal travels almost all the way to the floor with a rare combination of linear consistency and precision, so by the time the pedal is fully depressed, the car is fully at rest. Although we abused the brakes, the antilock braking system never found it necessary to intervene.

Its British sports car traits are intact, but the Vantage owes much of its engineering to the Germans and Italians, composed as it is of an international coalition of parts. The 4.3-liter V-8 engine is assembled by hand (alongside the V-12 engines of the Vanquish and DB9) in Cologne, Germany. The 6-speed Graziano gearbox, located at the rear, is made in Italy. Final assembly takes place at Aston’s manufacturing facility in Gaydon, England, where Aston Martin, for the first time since the early 1960s, has become a profitable brand.

In response to actual and anticipated demand for the new Vantage and the upcoming Vantage Volante convertible, Aston Martin, which built a total of 42 cars in 1994 and has faced insolvency seven times in its history, soon will increase its current production threefold to a total of 5,000 handbuilt cars. As if a British car company that makes money were not a radical enough concept, Aston Martin is betting that its latest car can siphon off enough 911 sales from Porsche to keep the company solvent for years to come. Considering that Porsche annually sells more 911s worldwide than the total number of Aston Martins produced in 91 years, this seems like a reasonable goal. Ferrari now builds fewer cars than Aston Martin, which leaves no doubt that the V8 Vantage is steering Aston in the right direction.