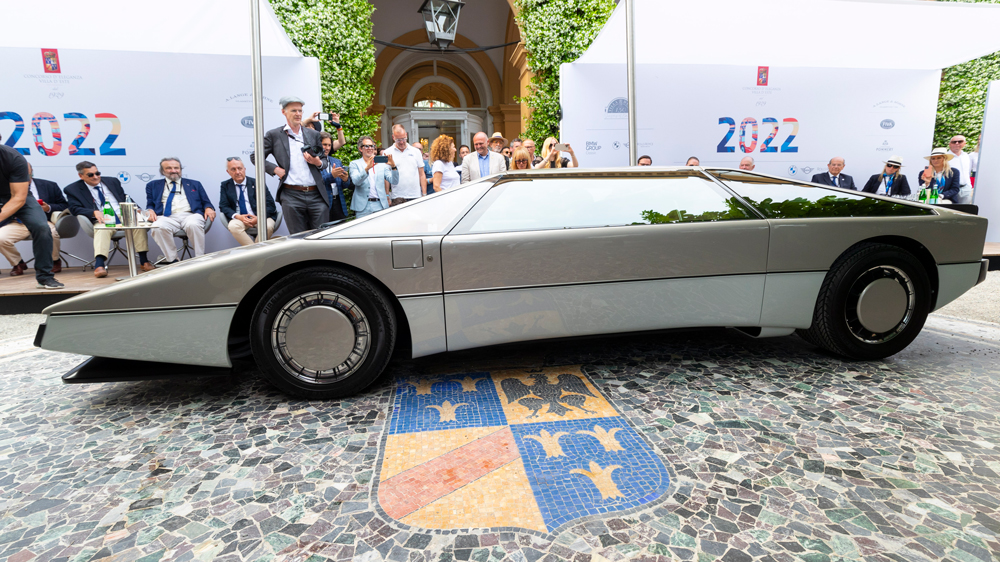 A survey of the winners at the world’s most discerning classic-car competitions typically reveals elegant dowagers from long-lost eras. At the Concorso d’Eleganza Villa d’Este, the world’s oldest car concours at 93 years and counting, top prizes are divided among two winners, and this year, one did not fit the usual mold. The renowned event, which had its 2022 edition take place last weekend, is put on by the Villa d’Este hotel, flanking Italy’s Lake Como, and the BMW Group. Its Trofeo BMW Group Best of Show victor is plucked by a predictably persnickety gaggle of white-hatted judges who dissect the provenance, appearance and operation of automotive entrants with a fine-toothed comb.

This year’s recipient of the honor was a 1937 Bugatti 57S, an aesthetically flawless black and grey example that fits the ideal image of a concours winner to a tee. Along with a short list of surefire beauties, which includes the Alfa Romeo 8C 2900B and virtually any Figoni & Falaschi or Saoutchik-bodied prewar roadster, the Bugatti wouldn’t be out of place at other top-tier affairs like Pebble Beach, Chantilly Arts & Elegance or Amelia Island.

The other big prize at Villa d’Este is the Coppa d’Oro, which is chosen by the public— in this case, “public” being a tad deceptive since attendees of Villa d’Este consist of a modest assemblage of enthusiasts who pay nearly $600 a head, and a thin slice of media. The day of judgment is, quite frankly, among the least grueling tasks in the classic-car world, involving intimate visual contact with the 50 or so historical competitors which are arrayed on the grounds of the baronial resort now entering its 150th year in operation.

For 2022, the Coppa d’Oro winner was the Aston Martin Bulldog, a pugnacious one-off wedge with straight-edge lines that put it in stark contrast to much of the field’s curvaceous French mainstays. The Bulldog debuted in 1979 as Aston’s moonshot concept car intended to pave the way for a small series of production vehicles. The first—and until very recently, the only—mid-engine Aston Martin, the Bulldog promised an apogee of sorts for the British brand: a true 200 mph gentleman’s express that combines a twin-turbocharged 650+ hp V-8 with showy features like electrically operated gullwing doors, a hideaway panel revealing a bank of programmable headlamps and a cushy veneer-lined cabin—filled with Connolly leather—that defies the severity of its sharp-edged bodywork.

The Bulldog’s story is an endearing one which includes every hallmark of underdog survival: A carmaker burdened by enough chronic financial distress to botch the potential of serial production, 35 years of dormancy and tumultuous stewardships which included one owner whose unfortunate mis-shift at nearly 170 mph nearly destroyed the car. The Bulldog’s new lease on life came with current owner Phillip Sarofim, who acquired the William Towns–designed two-seater and promptly commissioned a thorough ground-up restoration. Performed by Classic Motor Cars, in Shropshire, England, the 6,000-hour, 18-month project was led by Richard Gauntlett, son of Victor Gauntlett who served as Aston Martin’s executive chairman between 1981 and 1991.

Though Villa d’Este has long featured a separate class of contemporary concept cars, the Bulldog’s Coppa d’Oro win marks new ground for the nearly century-old event: Not only is it the youngest car to ever take the award, the 1970s icon flies in the face of the familiar Bugattis, Delahayes, Hispano-Suizas and the like which typically dominate the world’s top contests. Considering it took Pebble Beach 64 years to award a Ferrari Best in Show, the Bulldog is, for lack of a more imaginative reference, less your grandfather’s top pick and more what your 13-year-old self might have doodled as the world’s greatest car in the margins of your math homework.

A 6,000-hour, 18-month restoration on the Bulldog was led by Richard Gauntlett, son of Victor Gauntlett who served as Aston Martin’s executive chairman between 1981 and 1991.  Gudrun Muschalla, courtesy of BMW AG.

The win is a breath of fresh air within the concours microcosm, where an aging population often sides with blue-chip choices rather than challengers with fantastical stories and avant-garde design. Even better, the Bulldog’s future is still being written. Because it never achieved its full performance potential (it reached a recorded 192 mph in 1980, and with two people aboard), Sarofim is planning a speed run to exceed 200 mph—the ultimate top dog achievement for a deserving Bulldog.