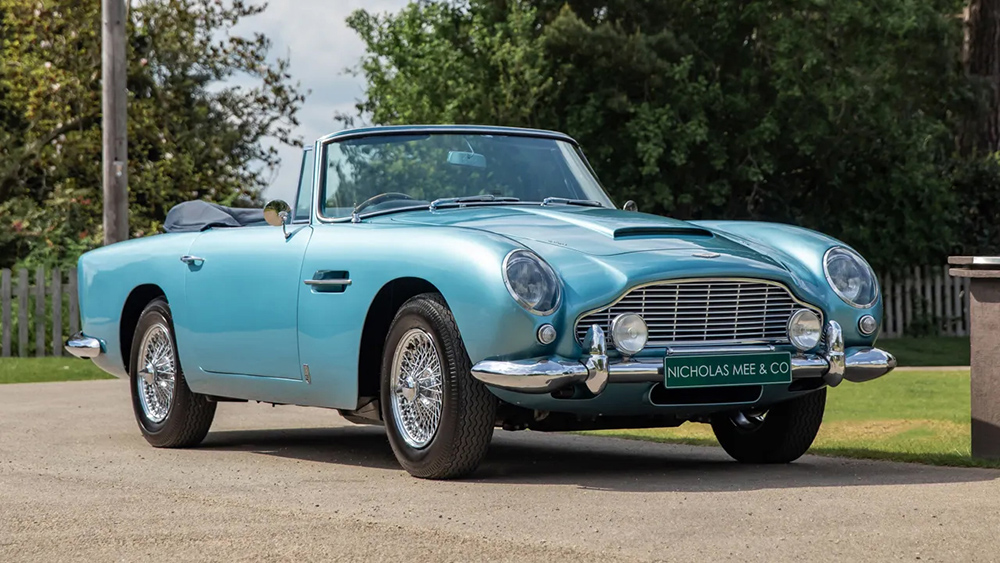 You know a car is good when it was made specifically for the marque’s leader.

Case in point: this Aston Martin DB5, which was ordered and owned by the very man who gave his initials to the DB series. That’s right, the classic convertible in question, which has just been listed for sale by Nicholas Mee & Co, belonged to none other than former Aston Martin chairman Sir David Brown, who purchased the automaker in ’47.

The rarity was one of just 123 DB5 convertibles ever built and was delivered to Brown in January of 1964. As you might expect, it was built to the highest specifications, with a 4.0-liter engine, a then-new 5-speed ZF gearbox, a power lock rear axle, chromed wire wheels and a Motorola radio. It was a looker, too, with a vibrant Caribbean Pearl exterior over a dark blue interior.

The car was restored to its original spec in 2014.  Nicholas Mee & Co

The drop-top stayed with the chairman for three years before Aston Martin collector John Wilkinson snapped it up in the late ‘60s and installed a replacement engine block. During this time, a newly stamped manufacturer’s identity plate was also applied.

In 2014, the DB5 was treated to a major restoration and was returned to its original spec. This included a rebuild of the mill, suspension, gearbox, brakes and rear axle. The exterior was also repainted and the interior retrimmed in Connolly leather. It reportedly drives as beautifully today as it did when in the hands of Sir David.

The British icon, which has appeared at numerous Concours events across Europe, last changed hands in ‘94. That means it has not been on the market for some 28 years.

The interior was retrimmed in Connolly leather.  Nicholas Mee & Co

“The very fact that Sir David Brown owned this DB5 Convertible makes it one of the most special and unique DB cars of all time,” founder of Nicholas Mee & Co, Nicholas Mee, said in a statement. “It is restored to precisely the same specifications Sir David ordered it in back in 1964, it’s a car he cherished and loved.”