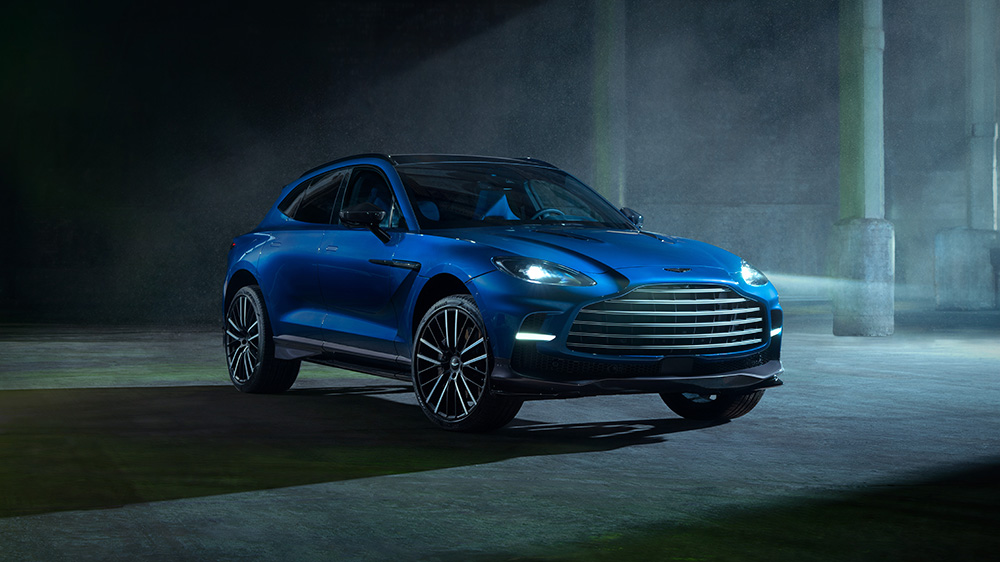 Aston Martin doesn’t just want to raise the bar for its popular DBX, it wants to flat out beat other luxury SUVs.

After months of teasing, the British marque has just unveiled a new, high-performance version of its popular SUV called DBX707. The new variant isn’t just an improvement on what came before—it’s the most powerful luxury SUV of all time.

Introduced in late 2020 as part of the 2021 model year, the DBX has been resounding success for the automaker. The brand has already sold 3,000 examples of the SUV, which starts at $176,900, easily outpacing every other model in its lineup combined, and has collected its fair share of accolades from the automotive press. With the introduction of a new, more powerful DBX, the excitement surrounding the vehicle likely won’t die down anytime soon.

The biggest difference between the DBX707 and its predecessor lurks under its hood. There you’ll find that the 4.0-liter twin-turbo V-8 has been treated to an extensive upgrade. It now features ball bearing turbo chargers and has been given a bespoke tune that has liberated more power and torque, according to a press release. The mill is also now mated to a 9-speed wet-clutch automatic transmission that allows for faster shifting, which the automaker says will feel more immediate and direct.

You’ll feel the differences out on the road, too. Aston Martin claims the variant’s powertrain can deliver 697 hp and 663 ft lbs of torque. That’s enough to push the SUV from zero to 60 mph in 3.1 seconds and reach a top speed of 193 mph. For those who are counting, that’s an increase of 155 hp and 147 ft lbs of torque over the original DBX, which we wouldn’t exactly call a slouch in the performance department. But the DBX707 isn’t just more powerful than its predecessor; it’s also more powerful than all the SUVs in the luxury class, including the Lamborghini Urus (641 hp), Porsche Cayenne Turbo GT (631 hp) and Bentley Bentayga Speed (626 hp). The automaker promised it would deliver the most powerful luxury SUV and it looks to have done that—by a wide margin.

Aside from the engine upgrades, Aston Martin has also reworked the SUV’s suspension. The DBX707 has been given a dedicated chassis tune to account for the added power and its electronic steering system has been adjusted, along with new damper valving and recalibration to improve control and response. Each of the SUV’s 22-inch wheels (23-inch wheels are available as an optional add-on) also come equipped with new carbon ceramic brakes that provide better stopping performance.

Inside the DBX707  Aston Martin

The changes aren’t limited to what you can see, either. Although the DBX707 doesn’t look radically different from its predecessor, the front end has been fitted with an enlarged satin-chrome grille, along with new air intakes, brake cooling ducts and splitter. There’s also a new louvered hood, sculpted flanks, a more dramatic roof wing and enlarged twin rear diffusers. Inside, you’ll find that the DBX’s elegant interior has mainly been left alone, though dark chrome trim and 16-way adjustable Sport seats now come standard.

“Right from its first introduction the DBX has represented Aston Martin’s dynamic and design values in a way that proves not all SUVs have to conform to the same compromises,” Aston Martin CEO Tobias Moers said in a statement. “With the DBX707 we have pushed the boundaries in every area to create a car which sets new standards of performance and desirability. The fastest, most powerful, best handling and most engaging car of its kind, it propels Aston Martin to the pinnacle of SUV performance.”

Aston Martin intends to put the DBX707 into production later in the quarter. The brawny SUV will start at $232,000, not including fees, and the marque is taking reservations now. If everything goes to plan, deliveries are expected to start this spring.