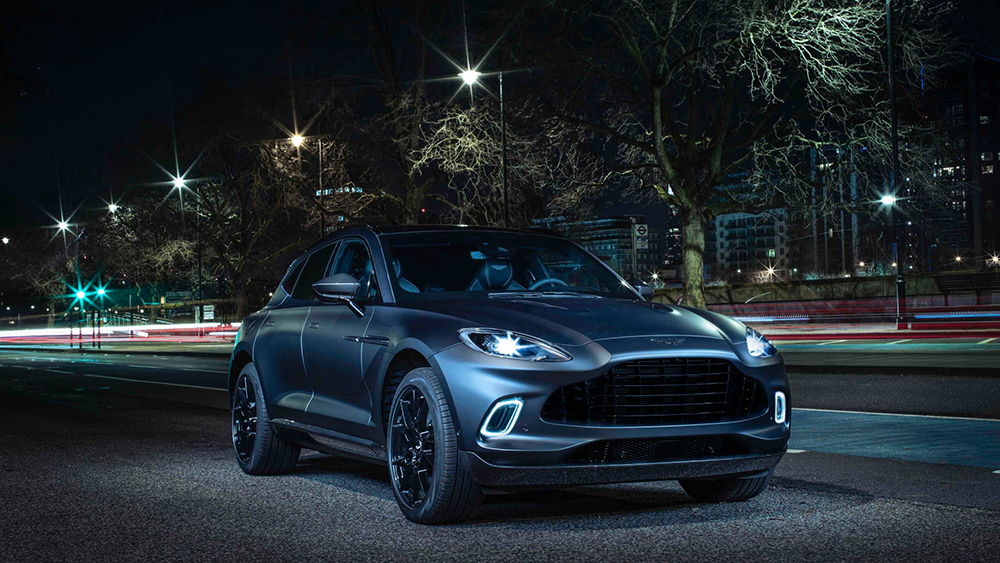 If you can’t beat ’em, SUV ’em. That may as well be Aston Martin’s mantra of the moment, as the British marque is diving head first into the auto industry’s most dominant trend: building crossovers.

After narrowly evading financial collapse earlier this year, the marque famous for creating Bond cars is flexing its design muscle with the previously unexplored category. The DBX, which Robb Report recently road tested in the desert of Oman, is billed by the automaker as having the “soul of a sports car” that will be greatly customizable thanks to the Q by Aston Martin program.

To demonstrate just what is possible with the crossover’s customization options, Aston Martin created a variant with an urbane matte exterior, glossy black wheels and an interior enhanced with a diamond-patterned aluminum jewelry pack. A carbon-fiber finish on the main console further punctuates the overall look. That material, the carmaker claims, was machine-carved from a single block comprised of 280 hand-applied layers which were then milled to achieve its textured finish.

The DBX has spent years in development, first modeled virtually in 2015 and then created and tested physically in 2018. Aston Martin stated in a press release that the company hopes to achieve a seamless merging of sports car performance and the versatility of a high-end SUV. “DBX also marks a key moment in the delivery of the third and final phase of our Second Century Plan, not only representing the promised expansion of our portfolio but also signaling the start of production at Aston Martin’s second manufacturing plant,” said Dr. Andy Palmer, Aston Martin’s CEO.

Aston Martin is using a dedicated SUV platform to construct the DBX, a practice rarely seen across the industry. It will house a bonded aluminum body like those founds in its sports car, a construction that’s designed to be both light and sturdy to balance speed and safety.

The DBX, of course, represents more than a new model for the marque. Aston Martin was recently rescued from going out of business by a $239 million investment from Formula 1 billionaire Lawrence Stroll––the eighth time in its history when it nearly went under. Not unlike Bentley, Lamborghini and Rolls-Royce, the automaker is betting that the SUV will become a valuable revenue stream that will add to its bottom line for years to come.

The DBX be available for purchase in the second half of this year with a starting price of $189,900.

See more photos of the DBX below: