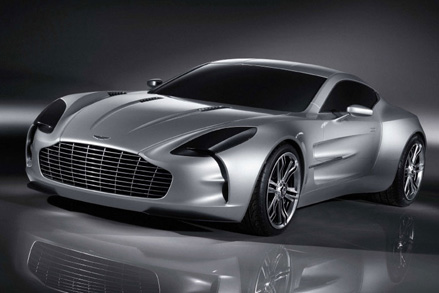 Apparently keen to oust the Bugatti Veyron from its lofty perch, Aston Martin is poised to deliver a limited-production supercar that may prove to be the world’s most expensive. Priced at a cool £1 million (about $1.5 million, at current exchange), the car—code-named One-77—will debut next year as the supreme expression of the Aston Martin brand, with a low-slung shape that merges traditional styling cues with the British automaker’s evolving design language. The One-77 (a “working title,” says Aston; expect the production car to carry a more evocative moniker) features a bespoke structure made of stiff, lightweight carbon fiber composite and a handcrafted aluminum body. The car will employ a version of the 6-liter V-12 engine in the DB9/DBS, enlarged to 7 liters and likely rated between 600 and 650 horsepower. Performance, doubtless, will be scintillating: The charge to 60 mph is expected take less than four seconds, and the One-77 will fly to a top speed in excess of 200 mph. No mere car, Aston is calling the One-77 “the world’s most desirable automotive art form.” Production, which is set to commence next year, is fittingly capped at a scant 77 units, with respective buyers expected to be intimately involved in every step of the process. (www.astonmartin.com, www.one-77.com)