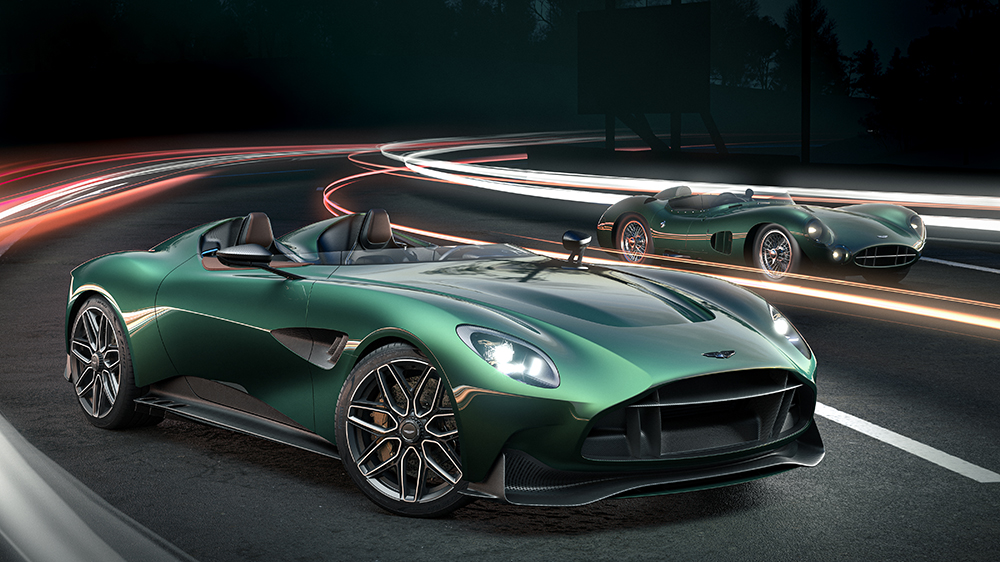 Monterey Car Week is finally here, and so is the first of Aston Martin’s big reveals.

The British automaker offered up a first glimpse at the stunning open-cockpit DBR22 on Monday. The exquisite speed machine is meant to celebrate 10 years of the marque’s bespoke Q division and will make its full public debut later this week.

Aston Martin first teased the DBR22 earlier this month when it announced it would be bringing two new cars to Monterey to make their official debuts at the Pebble Beach Concours d’Elegance. The brand claimed it would be “very special, ultra-exclusive” vehicle, but even that didn’t prepare us for the company’s roofless design concept. The new model is inspired by the iconic DBR1 and DB3S race cars of the 1950s, the former of which Roy Salvadori and Carol Shelby drove to victory at Le Mans in 1959. Like those racers, it features an uncovered two-seat cockpit with a lowline wind deflector instead of a windscreen. It’s similar to the recent V12 Speedster but features a much smoother body design with as few panels as possible, a prominent horseshoe vent in the hood an all-new grille with a carbon-fiber inserts.

Despite its exterior very explicitly taking inspiration from the past, the DBR22’s interior has some very modern features, like the brand’s current infotainment system. The look of the cabin is sleek and spare, but everything, including the dashboard, is covered in “supple aromatic” leather and accented with carbon-fiber trim.

Powering the car is the same 5.2-liter twin-turbocharged V-12 that Aston Martin has made use of for a few years now. The beefy mill is connected to an eight-speed paddle-shift automatic transmission and pumps out 705 horses and 555 ft lbs of twist. With all that power, you’ll be able to rocket from zero to 60 in 3.4 seconds and hit a top speed of 198 mph. The car has some serious zip to it, so anyone getting behind the wheel may want to put on a good pair of glasses or goggles before taking it out for a spin.

Inside the DBR22  Aston Martin

Aston Martin hasn’t announced a price or release date for the DBR22, but we’d be willing to bet good money that any car honoring the marque’s Q division will be both expensive and limited. Every past Q model has been exclusive, and there have even been suggestions that the latest could be limited to as few as 10 examples to celebrate its first decade in operation.

Click here to see all of the photos of the Aston Martin DBR22.