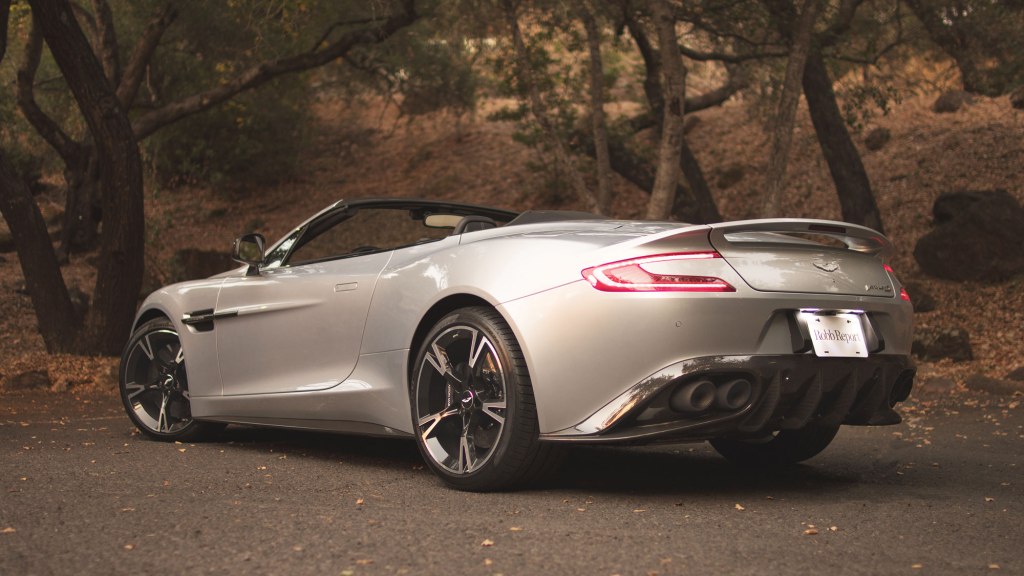 It can be argued that the voluminous V-12 engine has never been more poshly presented than in the Aston Martin Vanquish S Volante. The open-top tourer we tested is from the last model year that will benefit from a naturally aspirated V-12 before it’s replaced with a twin-turbo version. But as far as final bows go, this one is brilliant.

“Totally gorgeous,” gushed Russ Faulk, adding that it has a “great exhaust note that mirrors the exuberance with which you are driving. Quiet and civil when you want it to be, but you know that growl is always ready to be let loose.” Roy Arnold’s assessment was similar: “It has all of the attributes of a great GT. Love the sound of that naturally aspirated V-12.”

Crafted from aluminum and carbon fiber, the convertible would be de rigueur for the fictitious covert operative who helped make the marque a mainstay in circles of affluence and influence. “Agent 007 never looked so good,” said Scott Dillon. “A license to chill.” Barbara Palumbo was even more personal with her praise: “If this car were a human, it would be someone I’d date.” And for Scott Rosen, it’s “the perfect car to cheat on your Lamborghini with.”

A number of judges, however, were less than smitten with the interior electronics and instrumentation, considering that the Vanquish S Volante was one of the costliest cars in our competitive field. “The interior controls and displays seem dated,” opined Ed Chui. And for Taylor Merritt, “the navigation screen looks like an afterthought.”

But those who weren’t enthralled were in the minority, especially when it came to performance, which is enhanced by the 8-speed automatic transmission (with a shift-by-wire control system), a launch-control feature (rocketing the roadster from zero to 60 mph in 3.5 seconds), and a retuned suspension. For Scott Pyles, the overall package was close to perfection: “This is truly the best of both worlds—all the power you want at any time, and pure elegance all the time. The owner of this car is in a world of their own, and they’re on top of it.”