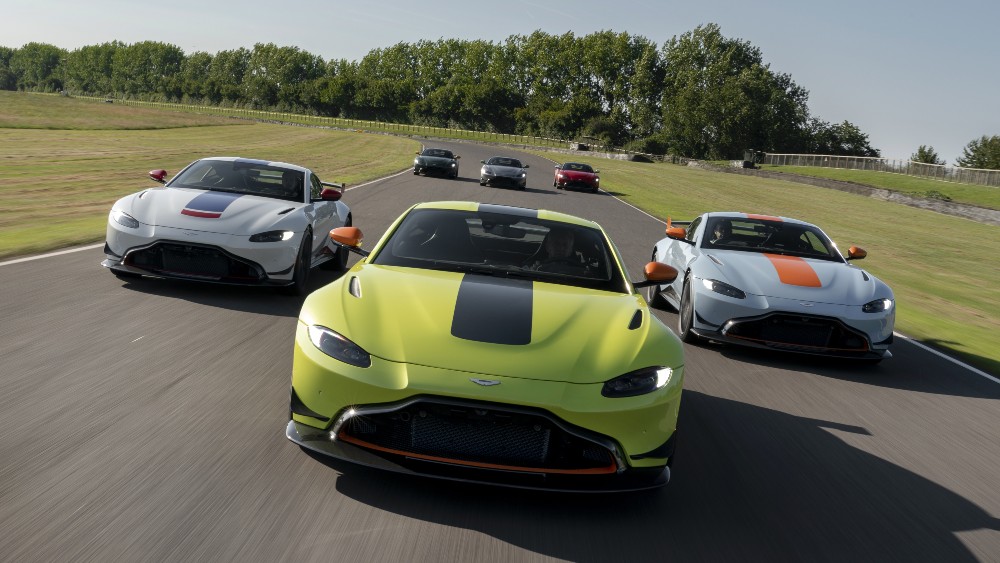 Aston Martin is waxing a little nostalgic at the Goodwood Festival of Speed.  The British automaker kicked off the fest on Thursday by unveiling its new “Vantage Heritage Racing Editions,” six souped-up speedsters designed to honor the company’s 91-year racing history. The Vantages mark specifically two major anniversaries—60 years since the brand’s legendary 1-2 finish at the 24 Hours of Le Mans and 70 years since the company first raced at the Goodwood Motor Circuit. The limited-edition vehicles will be available in six special color schemes and liveries designed by the brand’s bespoke personalization service, “Q by Aston Martin.”

The first, “The Record Breaker,” is based on the Razor Blade which set two class records in the 1500CC light car class at Brooklands in 1923, and matches the green Pantone of its chassis perfectly. “The Italian Progettista” is inspired by the red Ulster that finished third overall at Le Mans in 1935 and has “Aston Martin” lettered on the side gill. Meanwhile, “The Dave Brown Era” comes in green and yellow, a nod to when the company used different colors on individual cars to identify them during races, and the white, blue and red “The Group C Monster” celebrates the AMR1 that raced in Group C in 1989.  “The Le Mans Winner” pays tribute to the “Gulf” light blue and orange livery of the DBR9 that won Le Mans in both 2007 and 2008. And finally, the “Next Generation,” which features Lime Essence and Stirling Green body panels, honors the company’s present-day efforts in the FIA World Endurance Championship.

In addition to the painstakingly matched color schemes, each Vantage Heritage Racing Edition features a new aero kit—a carbon fiber rear wing, dive planes and extended front splitter—that adds 428 pounds of downforce at 190 mph. The kit was developed by the company’s aerodynamics team to ensure the balance and stability of the new Vantage that was released last year. Each car also features light-weight wheels and carbon-fiber interior details to help keep weight down.

The six Vantages will be on display at Goodwood this weekend, under the Central Feature. Limited to a run of just 60, only 10 of each livery will be produced. While the price was not made available, the Vantage starts at $150,000.