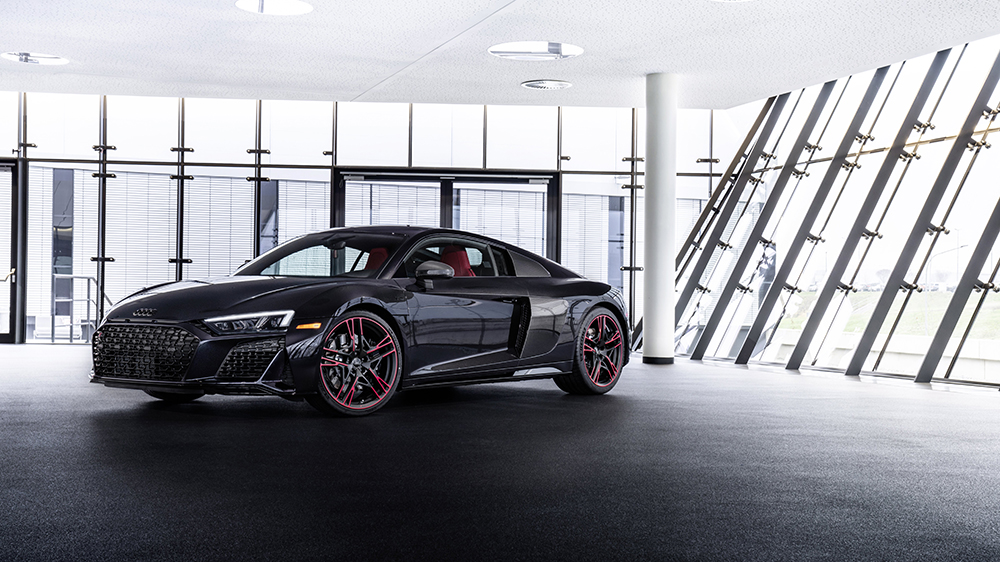 Audi enthusiasts living in the US would be forgiven for thinking the automaker doesn’t view them as a priority. That’s because European customers tend to get the brand’s most exciting offerings, from high-performance wagons to special editions, all to themselves. Luckily, that’s starting to change, and the new R8 RWD Panther Edition is proof.

The German marque has just announced a special blacked-out version of its muscular, V10-powered supercar that will only be available to purchase in the US. And the athletic vehicle won’t be easy to get either, as only 30 examples are set to be built.

What sets this R8 apart from others is its special Panther Black Crystal Effect paint job. Adding to this stealthy effect are exposed carbon-fiber accents and blacked-out badging, including its iconic four-ring logo. In fact, with the exception of the LED lights, the only other color you’ll find on the exterior are dashes of Crimson Red on the car’s otherwise matte black, five-spoke wheels. The motif carries over to the car’s interior, with the exception of two racing shell seats covered in sumptuous red Nappa leather.

The exclusive variant will also be the first all-wheel-drive R8 to make it to this side of the Atlantic as well. With the exception of that, it remains pretty much the same supercar that blew us away last year, according to the brand. That includes its naturally aspirated 5.2-liter V10, which is capable of churning out 532 horsepower and 398 ft lbs of torque. All this power is directed to the rear wheels via a seven-speed dual-clutch transmission and allows the car to sprint from zero to 60 mph in 3.6 seconds.

The R8 RWD Panther Edition will arrive in US dealerships before the end of the calendar year. The limited-edition coupe starts at $183,300, though you’re also on the hook for a $1,495 destination charge and a $1,700 gas guzzler tax.

This isn’t the only attractive limited-edition model that Audi has unveiled this fall. In October, the marque announced the TT RS 40 Years of Quattro, a sporty tribute to the four decades of the company’s Quattro rally racers. Unfortunately, the exclusive coupé—which is limited to 40 examples, naturally—is only available to buy in Germany.