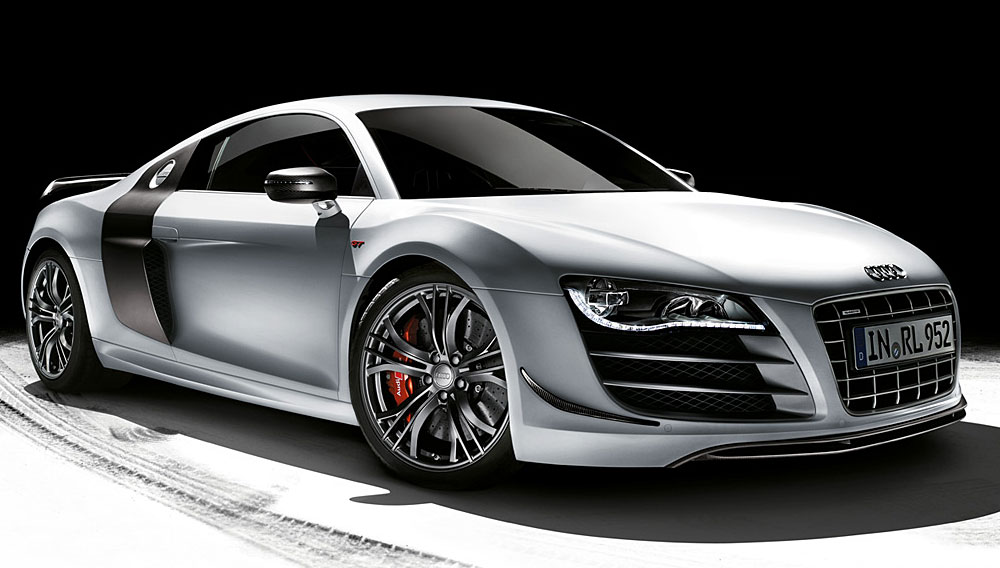 It can hardly be said that the Audi R8 5.2 is an automotive underachiever: Iron Man’s ride of choice is Hollywood gorgeous and, with 10 cylinders and 525 horsepower, fearsomely fast. Sixty miles per hour arrives in 3.7 seconds, and the speedometer needle will swing all the way to 196 miles per hour with a firmly planted right foot. But such scintillating performance hasn’t stopped Audi from turning this two-seat Perfect 10 up to 11. The new R8 GT has everything that makes the R8 5.2 so sensational, plus a good deal more.

In the GT, the R8’s normally aspirated 5.2-liter V-10 is invigorated to 560 horsepower (matching its corporate cousin, the Lamborghini Gallardo LP560-4), a gain entirely realized through tweaks to the engine’s electronic controls. It is matched only to a paddle-operated 6-speed sequential manual transmission that’s able to change gears in the blink of an eye—actually, at one-tenth of a second; gear changes happen about three times quicker than a blink.

But the R8 GT is about more than just additional power—or, more accurately, less. The car is markedly lighter than the standard R8 5.2. Audi’s engineers studied every aspect of the R8 in a single-minded search for weight savings. In the end, they excised more than 220 pounds from a host of places. For instance: Thinner windshield glass and the use of a polycarbonate rear window save 19.84 pounds; new glass-reinforced plastic seats save 69.45 pounds; lighter carpeting saves 17.42 pounds; and a fixed rear wing in place of the standard car’s articulated spoiler saves 2.65 pounds. As every racer knows, little things mean a lot.

No surprise, more ponies and fewer pounds mean the R8 GT is quicker and faster than the R8 5.2: 60 mph arrives in 3.6 seconds and the top speed rises to 199 mph. For those eager to exploit the GT’s talents on the racetrack, a factory-competition package is available, which includes a bolt-in roll bar, four-point seat belts, a fire extinguisher, and a kill switch for the battery.

The company plans to build a scant 333 R8 GTs, priced in Germany at 193,000 euros (about $240,000). For now, the car is earmarked for European consumption only, but Audi hasn’t ruled out the possibility of bringing a few precious examples of this rarest R8 to America. Tony Stark will be pleased. (audiusa.com)