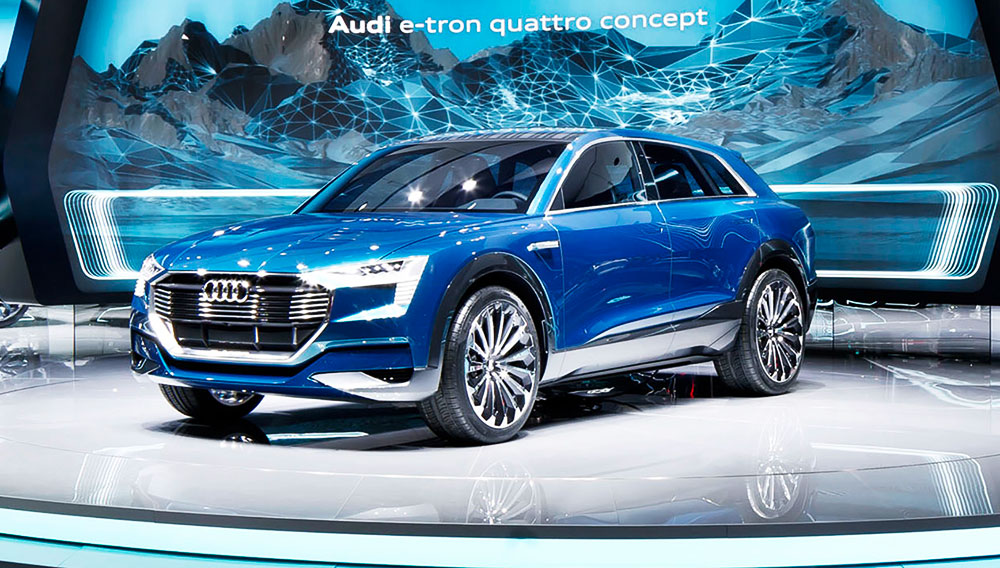 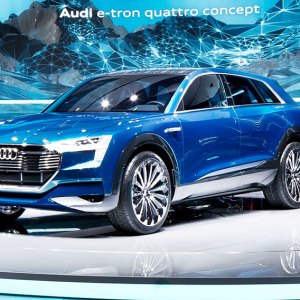 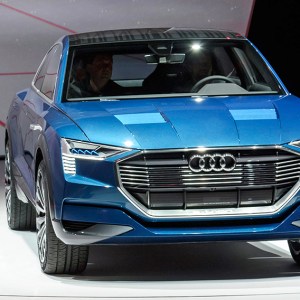 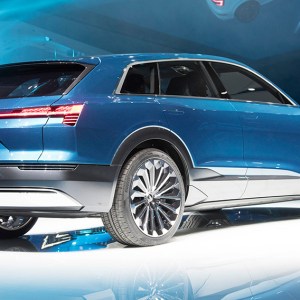 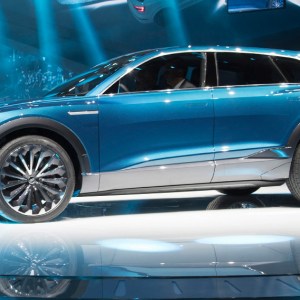 With a streamlined design focused on maximizing aerodynamics, the Audi E-Tron Quattro Concept is an electric crossover that made its first appearance at this year’s Frankfurt auto show. It is no secret that the plug-in SUV aims to take on the forthcoming Tesla Model X, and although this version of the E-Tron Quattro is just a concept, Audi says a production model will debut in 2018.

Three electric motors (one in the front and two in the rear) are mated to a liquid-cooled, lithium-ion battery pack for a total output of about 429 hp. With 590 ft lbs of torque right off of the line, the E-Tron Quattro Concept can go from zero to 60 mph in 4.6 seconds on its way to a top speed of 130 mph. This is slightly quicker than the base Tesla Model X, which reportedly can do the same sprint in 4.8 seconds. Using a 150 kW DC fast charger, the E-Tron Quattro Concept can fully charge in about 50 minutes and has a range of about 310 miles. The Tesla Model X 90D and its more acceleration-friendly P90D iteration can only cover 257 miles and 250 miles, respectively, on one charge.

And although its performance may be compared to the Tesla, the E-Tron Quattro Concept differs significantly in its styling, with a sloping roofline and flat greenhouse with side windows that look similar to those on the Range Rover Evoque. Electrically operated aerodynamic elements on the hood, side, and rear end help to direct air most efficiently around the car, and an adaptive suspension lowers the car at higher speeds, both of which help achieve a low drag coefficient of 0.25. The concept also has a solar roof that adds energy to the battery—a valuable convenience even though it cannot charge the battery completely. The cabin, which seats four, uses OLED displays in both the front and rear to control vehicle functions.

A multitude of technologies that enable autonomous and semi-autonomous driving also make their first appearance on the E-Tron Quattro Concept with onboard video cameras and radar, ultrasonic, and laser sensors to help the car navigate itself through traffic. Audi says the systems are “nearly ready” for use in its future production cars. (audi.com)