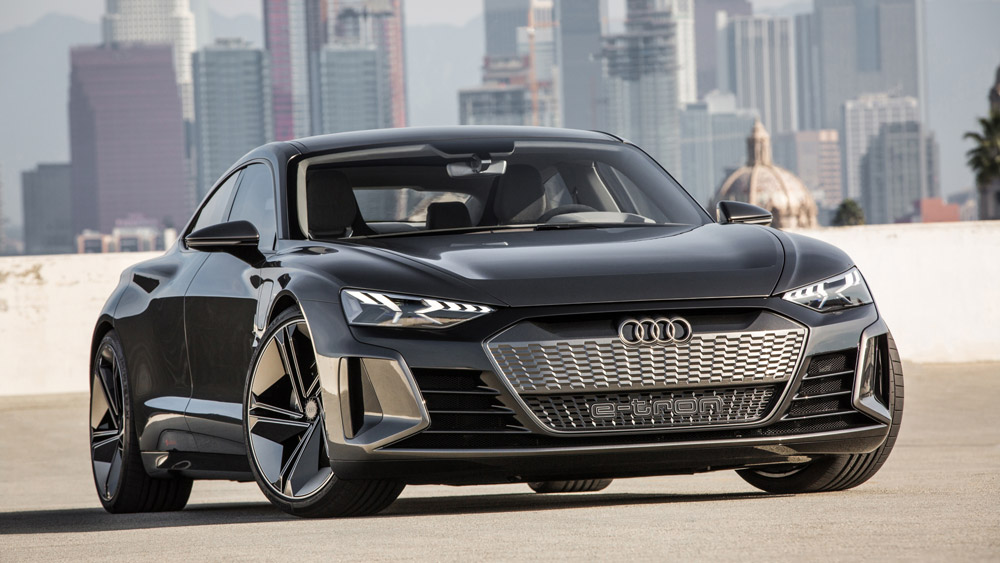 Low and wide, the eTron GT employs classic grand turismo proportions, aggressively flared fenders, and a sloping roofline. “The way the car sits, there is so much character and feeling,” says Parys Cybulski, an Audi designer who worked on the car. At the eTron GT’s unveiling party ahead of this year’s L.A. Auto Show (where Robert Downey, Jr. took off its wraps), Cybulski stood next to me, running his hand over the sharply sculpted shoulders and wheel arches. Along the sides of the car, there are no cut lines, save for the doors and the charging port cover. This, he told me, is an engineering feat that took several tries to get right. “We had to stretch the metal over such a large distance. [The engineers] kept telling us, ‘It’s not possible. The metal will break.’ But we kept trying, and we found the shapes that worked.” Cybulski also noted the more horizontal take on the Audi singleframe front grille, as well as the arrow themes in the front and rear lighting signatures.

The range will be roughly 250 miles.  Photo: Courtesy of Audi AG.

Beneath the body of aluminum, carbon, and high-strength steel (which was developed in collaboration with sister company Porsche), is a lithium-ion battery pack that spans the entire underfloor. Two electric motors—one on each axle—offer fully variable all-wheel drive and produce a total of 590 hp. Combined with an energy recuperation system, the eTron GT is expected to have a range of about 250 miles. According to Audi, the production car will go from zero to 62 mph in around 3.5 seconds, with a top speed electronically limited to 149 mph. The eTron GT can be charged wirelessly, but the fastest will be via an 800-volt wired charging system, which can provide up to an 80 percent charge in 20 minutes.

The interior of the eTron GT offers substantial luggage space in both the trunk and under the hood, thanks to its electric motors that are much smaller than a gasoline engine. A geometrically shaped steering wheel frames a digital instrument cluster in front of the driver, while a widescreen central display shows navigation, vehicle information, and other functions. Sustainability is a theme Audi designers wanted to carry inside the cabin; the upholstery is a combination of synthetic leather and fabric made from recycled fibers, and the carpets are made from recycled fishing nets.

The Audi eTron GT will go into production in 2020, with deliveries expected by early 2022. Cybulski divulged (and Audi design boss Marc Lichte later confirmed) that the final product will be nearly identical to the show car, with the exception of a few minor details such as the door handles and wheels.