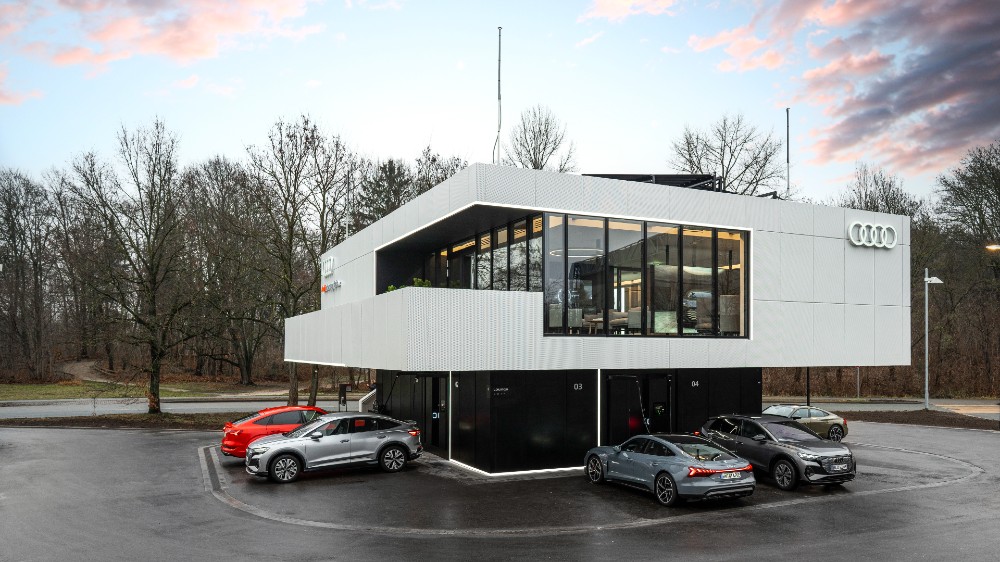 Audi wants to make the experience of charging your EV as enjoyable as possible.

The luxury marque opened what it’s calling the world’s first charging hub in its home country of Germany on Thursday. It’s not like a gas station for EVs, though. Instead, the reservation-only hub features a well-appointed lounge you can relax in while waiting for your battery to top up.

The charging concept, which is located in Nuremberg, is part of a pilot program aimed at making life easier for EV owners living in urban areas, specifically those who don’t have their own superchargers at home. The station is equipped with six charging points, which are powered by 2.45 MWh of interim storage and an additional 200 kW of green energy, according to a press release.

“We want to use it to test flexible and premium-oriented quick-charging infrastructure in urban space,” Ralph Hollmig, the manager of the project, said in a statement. “We’re going where our customers don’t necessarily wake up in the morning with a fully charged electric car and at the same time thinking about increasing charging demand in the future.”

Those ports will be pretty powerful, too. Audi says they’ll each have 320 kW of charging power, meaning they can add 62 miles of driving range to the E-Tron GT in just five minutes and charge its battery from 5 to 80 percent in about 23 minutes. The automaker expects that around 80 EVs will be able to use the hub each day.

That’s nowhere near as fast as it would take to fill up a traditional car with gas, of course (although that may soon change). Because of this, the hub includes a well-appointed waiting lounge upstairs. The modern space will have couches, TVs, WiFi and self-serve coffee and vending machines so you can relax or work while your EV charges. You won’t have to worry about your racking up a huge bill while you wait, either. The company says each kilowatt should cost about 35 cents.

This is not a pop-in service, however—you won’t be able to just drive up to the hub with your EV. At least for now, charging appointments must be reserved in advance. And they are only open to E-Tron owners whose vehicle has Plug and Charge functionality and an active charging service contract.

That may sound limiting, but don’t be surprised if the automaker’s idea catches. After all, your first-class sky lounge was once just an idea, too.